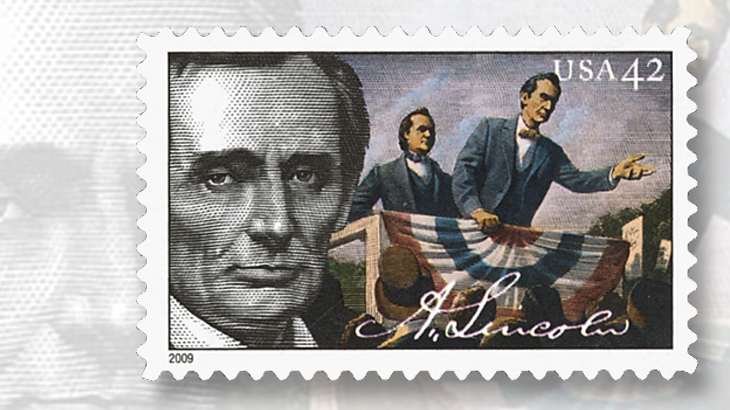 The portrait of Abraham Lincoln at left on the 42¢ stamp from 2009 is based on an 1860 Mathew Brady photograph.

Abraham Lincoln at one time said, “Brady and the Cooper Institute made me President.”

The Brady he referred to was photographer Mathew B. Brady, who took Lincoln’s portrait on Feb. 27, 1860, the day that Lincoln gave his important speech at the Cooper Union lecture hall in New York.

Brady, who was born May 18, 1822, was instrumental in creating, collecting and preserving many of the photographic images that chronicle the era of the Civil War. Brady did not take all of the photographs that bear his name. He was the head of a Washington studio that included other photographers working under his direction.

Several of those images have been the models for engravings on stamps, including portraits of Lincoln before and during his presidency.

The Cooper Union photograph taken by Brady shows Lincoln as a clean-shaven candidate standing with his left hand on a book. Lincoln’s face from that image was reproduced as part of the design of a 42¢ stamp issued Feb. 9, 2009, one of four stamps commemorating Lincoln’s birth bicentennial (Scott 4382).

Other stamps reproducing Brady portraits of Lincoln include the 90¢ carmine and black issue of 1869 (Scott 122), and a 20¢ commemorative from 1984 captioned “A Nation of Readers” (2105) that shows Lincoln and his son Tad looking at a book (believed to be a photo album in Brady’s studio).