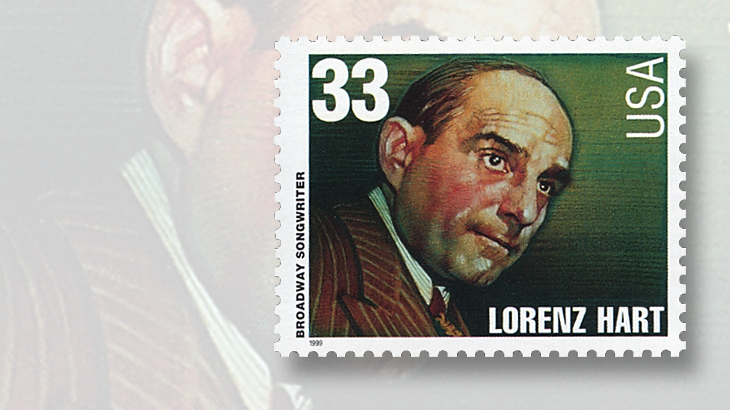 Lyricist Lorenz Hart is commemorated on this 33¢ stamp issued Sept. 21, 1999, in the Broadway Songwriters set in the American Music series (Scott 3347).

Lyricist Lorenz Hart was born May 2, 1895, in Harlem in New York City. He met musician Richard Rodgers in 1918, and the two formed a songwriting partnership, collaborating on amateur productions at Columbia University, where Hart was studying journalism.

In 1925, their show The Garrick Gaieties opened on Broadway with the popular hit Manhattan, which has since been performed in numerous films and television programs.

Hart’s lyrical sophistication contributed to the duo’s success. His struggles with depression were sometimes reflected in a poignant undercurrent of the songs he wrote with Rodgers.

Their Broadway success led to a series of films in the 1930s. They returned to New York and produced more top musicals including Babes in Arms (which produced the hits The Lady is a Tramp and My Funny Valentine) and Pal Joey (including the songs I Could Write a Book and Bewitched, Bothered and Bewildered).

Lorenz Hart died of pneumonia in 1943. Richard Rodgers collaborated with new partner Oscar Hammerstein II on huge hits, including Oklahoma! and The Sound of Music.