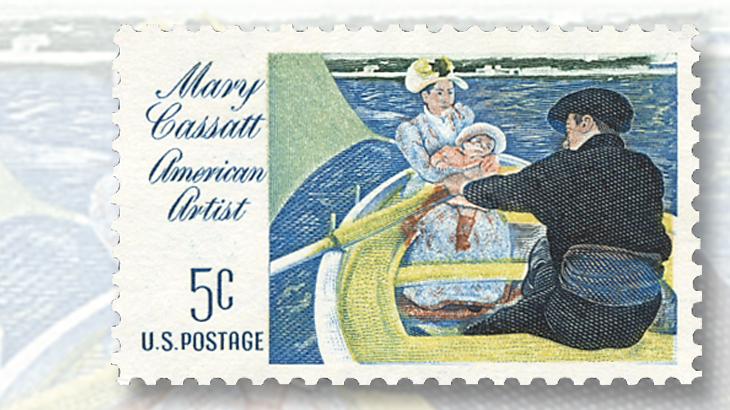 A detail of Mary Cassatt's painting The Boating Party appears on the 5¢ stamp honoring her, issued in 1966.

Impressionist painter Mary Stevenson Cassatt was born May 22, 1844, in Allegheny City, Pa., which today is part of Pittsburgh. While still in her teens she studied at the Pennsylvania Academy of Fine Arts, and moved to Paris in 1866 to further her education.

After returning to the United States in 1870 for one year she moved back to Paris and began finding an audience for her work. She was invited by Edgar Degas in 1877 to show her work in the Impressionist exhibitions; her friendship with Degas continued until his death in 1917.

When the United States Postal Service issued four stamps showing Cassatt paintings in 2003, it described Cassatt’s artwork: “Recurring themes in Cassatt’s paintings, pastels, prints and etchings include children engaging in various pastimes and contemporary women pursuing everyday activities such as entertaining visitors, and reading and caring for children. Paying careful attention to pose and gesture, she developed a vigorous, innovative style and rendered her subjects with a refreshingly unsentimental intimacy. By the end of the 19th century Cassatt was a pre-eminent artist in both the United States and France, where she died on June 14, 1926.”

Cassatt has been honored several times by the U.S. Postal Service.

A 5¢ stamp issued Nov. 17, 1966 (Scott 1322) shows her painting The Boating Party and is part of the American Artist commemorative series.

A 23¢ Great Americans definitive stamp issued in 1988 (Scott 2181) features a portrait of Cassatt.