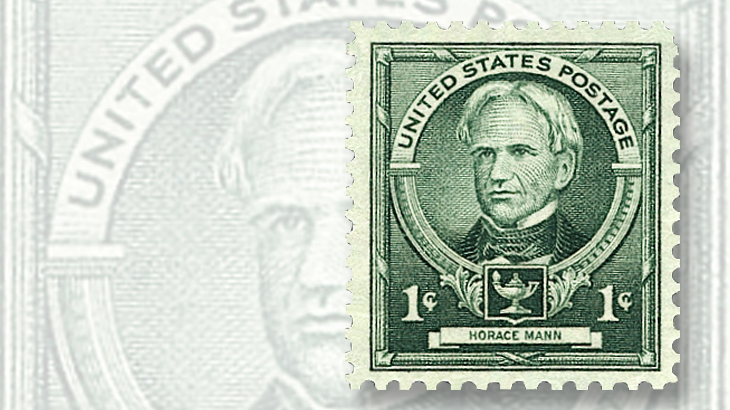 Horace Mann was honored in 1940 on a 1¢ stamp in the Famous Americans series.

Mann, who was born May 4, 1796, in Franklin, Mass., filled a number of important roles in his lifetime. His own education as a youngster was patchy, but he taught himself enough to gain entrance into Brown University, graduate as valedictorian, and continue on to study law.

He served in the Massachusetts legislature, and later in the state senate.

In 1837, he was appointed secretary of the Massachusetts board of education. He visited the schools throughout the state and published a journal reporting his findings. He advocated for secular education and public funding for schools, with well-trained teachers in an inclusive environment.

His successful educational reforms in Massachusetts influenced school systems in other states, and Mann today is known as “the father of American public education.”

In 1848, Mann was elected to the U.S. House of Representatives, and spoke out vigorously against slavery.

After leaving Congress in 1853, Mann was named as the first president of the new Antioch College in Yellow Springs, Ohio, where he served until his death in 1859. During a commencement speech that year, Mann told the graduating class, "Be ashamed to die until you have won some victory for humanity."

That statement is the college’s motto today, and is repeated each year during commencement.