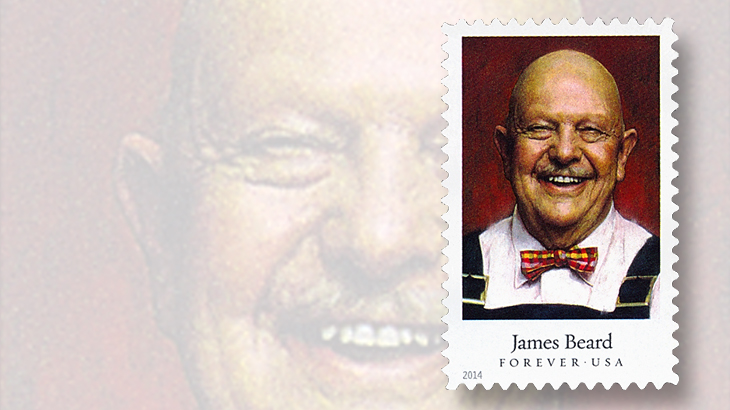 James Beard was honored on a forever stamp in the 2014 Celebrity Chefs set.

American chef James Andrew Beard was born May 5, 1903, in Portland, Ore. Initially hoping to find work as an actor, he traveled to France and became a devotee of French cuisine. He returned to the United States in 1927 and moved to New York City 10 years later. Still an aspiring actor, Beard opened a catering business that turned out to be a hit.

In 1940, Beard published his first book, Hors D'Oeuvre and Canapes, the first of some 20 cookbooks he would published during his career. He began appearing on television cooking shows as early as 1946, successfully combining his interests in acting and in cooking, and he opened his own James Beard Cooking School in 1955.

In a press release issued as the Celebrity Chefs forever stamps were being introduced, the United States Postal Service wrote, “Teacher and author James Beard (1903-1985) avidly fostered a more vibrant food culture in the United States. He was a passionate advocate of local ingredients and markets, and his popular books covered everything from seafood to bread.”