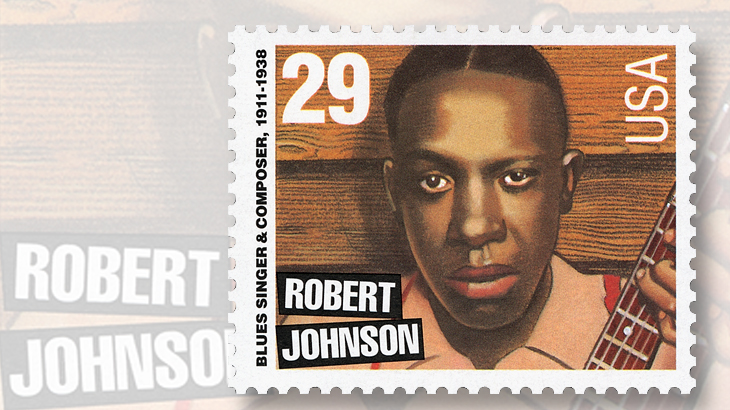 The 29¢ Robert Johnson commemorative, issued in 1994, is part of the American Music series.

The life of blues musician Robert Johnson was tragically short, ending under mysterious circumstances at age 27, but he is acknowledged today as a legendary influence on early Delta blues and the development of rock ’n’ roll.

The birthdate of Robert Leroy Johnson is most often listed as May 8, 1911, and his birthplace was Hazlehurst, Miss. He moved around a lot as a youngster, and continued his itinerant ways as a young adult. He became a skilled guitarist, an innovative songwriter and a talented singer, but he never achieved real fame during his lifetime. He played on street corners and in juke joints, earning enough money to move on to the next town.

In 1936, Johnson recorded some of his songs for the American Record Corporation in San Antonio, Texas. A few months later, another recording session took place in Dallas. One song, Terraplane Blues, found a local audience and sold some 5,000 copies.

It was only years after his death in 1938, suspected as the result of a poisoning by a jealous husband, that the music of Robert Johnson began to gain the following it enjoys today. Johnson is cited as an influence by Eric Clapton, the Rolling Stones, Bob Dylan and many others, and his songs, including Sweet Home Chicago and Cross Road Blues, are considered blues classics.

Johnson was inducted into the Rock and Roll Hall of Fame in 1986, and awarded a Grammy Lifetime Achievement Award in 2006. His recorded output consists of 29 songs.