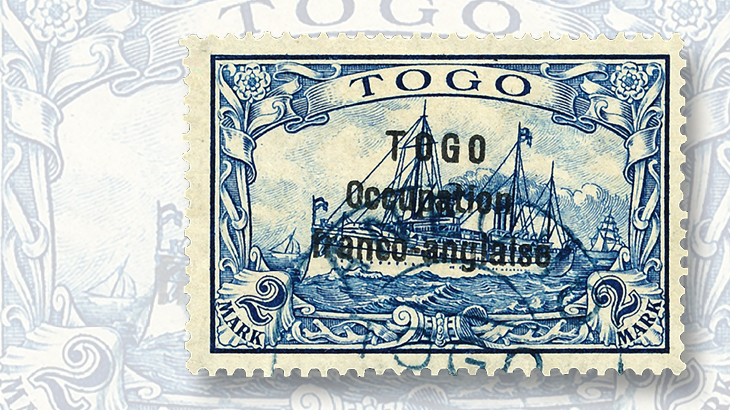 This rarity from Togo, a 2-mark stamp of the 1915 overprinted set, is one of just seven examples known. It will be offered by Christoph Gaertner during the firm’s June 13-17 auction.

The Christoph Gaertner auction house in Germany will hold five days of stamp and postal history auctions from June 13-17.

The new auction series comes on the heels of the May 30 Gaertner Worldwide Rarities auction at World Stamp Show-NY 2016 in New York City.

Tuesday is dedicated to European countries plus a special presentation of Italy and Austria.

Wednesday’s auction is mostly Germany throughout history, including German States, with an additional auction of picture postcards.

Collections are the focus of the auctions on Thursday and Friday, with mostly German collections and literature offered Friday afternoon.

The individual catalogs for this auction can be viewed on the website www.auktionen-gaertner.de, where images of the individual lots can be inspected with detailed descriptions of each.

Bidding is available through Stamp Auction Network with advance registration.

The North America catalog includes an example of the 1869 United States 10¢ Eagle and Shield stamp franking a letter from Boston, Mass., to Yokohama, Japan, with the handwritten endorsement “Via San Francisco, over land.”

The letter was mailed in Boston on Sept. 21, 1869, and the stamp is tied with a Boston duplex cancel. The reverse of the envelope is struck with the sender’s circular company dater bearing the date.

A rarity of the German Protectorate of Togo during French and British occupation in World War I will be offered during the Wednesday afternoon session.

The 2-mark blue Kaiser’s Yacht stamp was among those used in Togo during the early years of the 20th century. Under French and British occupation, overprints were applied to these stamps in 1914 and later with the message “TOGO Occupation franco anglaise” in either serif or sans serif type.

The two dozen or so stamps listed with this overprint are all rather pricey, but the top values with the sans serif type are the hardest to find.

In the Scott Classic Specialized Catalogue of Stamps and Covers 1840-1940, these rarities are listed with no value given.

Only seven examples have been found of the 2m blue with the sans serif overprint of the Catholic Mission in Lome, Gaertner notes: one is unused, and six are used.

The stamp in this auction was once part of the collection of Col. E.H.R. Green, who is also known as the collector who bought and broke up the only known sheet of the U.S. 1918 24¢ Jenny Invert airmail error.

The Togo stamp is canceled by an Anecho, Togo, circular datestamp in blue and handstamped by Champion on the reverse.

It is accompanied by a 1987 photo-certificate of authenticity from expert Peter Holcombe of Lucerne, Switzerland, and offered with a starting price of E22,500 (approximately $25,150).

Another German rarity on offer is a 1933 four-stamp semipostal souvenir sheet (Scott B58) with its watermark inverted, of which only two examples are known, according to the auction catalog description.

The variety is not listed in the Scott catalog, and in the Michel specialized catalog it is listed without a value.