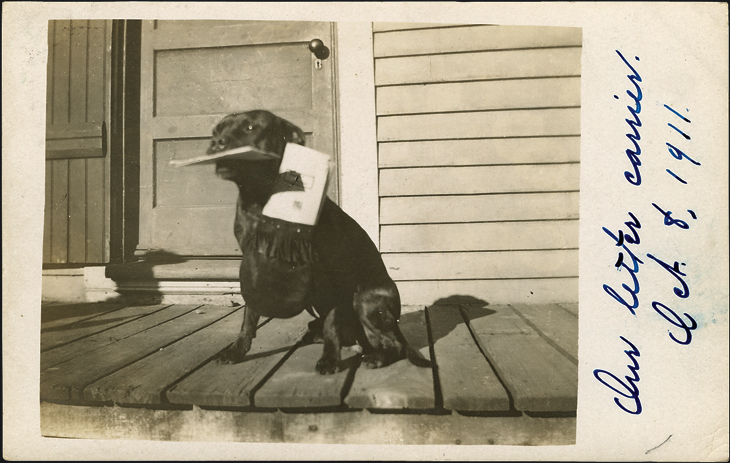 The family dog pictured on this 1911 postcard has been pressed into mail-carrier service, according to the handwritten note to the right of the photo. 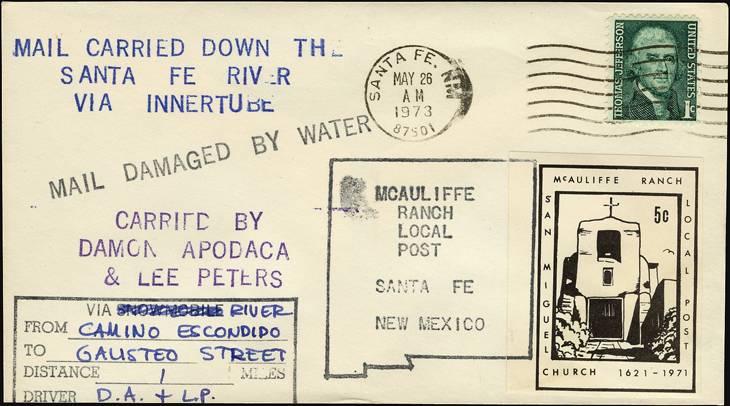 This 1973 cover was carried down the Santa Re River by inner tube.
Previous
Next

A few years ago, I discussed covers that show evidence of unusual mail-carrying methods (Linn’s, Aug. 26, 2013). Since then, I’ve found more covers showing additional methods, and Linn’s readers have reported others. It seems like it is a good time to update the list.

Some of the standard methods of mail conveyance in use today have been around for a couple of hundred years or more, including delivery and transport by humans, ships and boats, and animals. Mechanized transport was added after the invention of trains, trucks, and planes.

But there are so many more that go beyond these basic methods. Here is the list I presented in 2013:

By human being: on skis, on foot (long distance), by runner, hitchhiker.

By other means: tub mail, toboggan.

Of these, the “flying saucer mail” is included with tongue-in-cheek. The 1947 cover sent from Omaha, Neb., to Sidney, Ohio, has an insert that reads, “This cover, if it goes through, will be a souvenir of the mythical flying saucers that have been reported as having been seen in different sections of the country.”

The boa constrictor mail may also raise an eyebrow. It is a 1975 cover by the Cleveland Zoological Society Local Post.

Shown nearby is a postcard that depicts a dog and includes a handwritten note, “Our letter carrier, Oct. 8, 1911.”

Also pictured is a 1973 McAuliffe Ranch Local Post cover that was among the “mail carried down the Santa Fe River via innertube.” The cover also bears a “Mail damaged by water” handstamp.

I’m certain that we have not yet covered the waterfront, so to speak. If readers would like to report additional letter-carrying methods, write to me, John Hotchner, by email at jmhstamp@verizon.net, or by mail at Box 1125, Falls Church, VA 22014-0125.