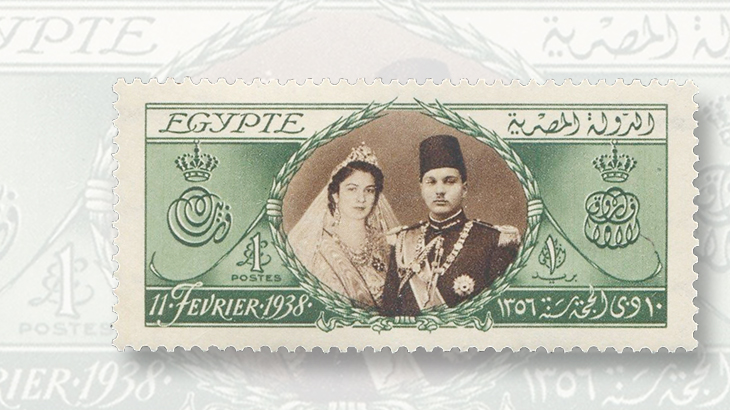 The Egyptian 1938 King Farouk’s 18th Birthday commemorative stamp (Scott 224) is in demand and selling for $200 to $250 in mint never-hinged condition.

King Farouk of Egypt was born Feb. 11, 1920, in Cairo. Although technically succeeded for 11 months by his infant son, Fuad II, he was effectively the last ruler of the dynasty founded by the first khedive of Egypt, Mohammed Ali.

Mohammed Ali was an Albanian soldier in the service of the Ottoman Empire. Farouk had no Egyptian blood, being of Albanian, Turkish, Circassian, and French ancestry. He ascended the throne of Egypt at the age of 16, upon the death of his father, Faud I.

As king, Farouk was noted for his extreme profligacy and enormous appetites. He spent vast fortunes from the Egyptian treasury on art, cars, rare coins, and other collectibles.

During World War II, he was privately pro-Axis, but the presence of the British military forced him to pursue an official policy of neutrality. He was overthrown by a military coup on July 23, 1952, and forced to flee into exile. Weighing more than 300 pounds, he collapsed and died after consuming a huge meal in a restaurant in Rome, Italy, on March 18, 1965.

This stamp is in demand and selling for $200-$250 in mint never-hinged condition and $140-$160 in unused hinged condition. An uncacheted first-day cover recently sold in an online auction for more than $400.