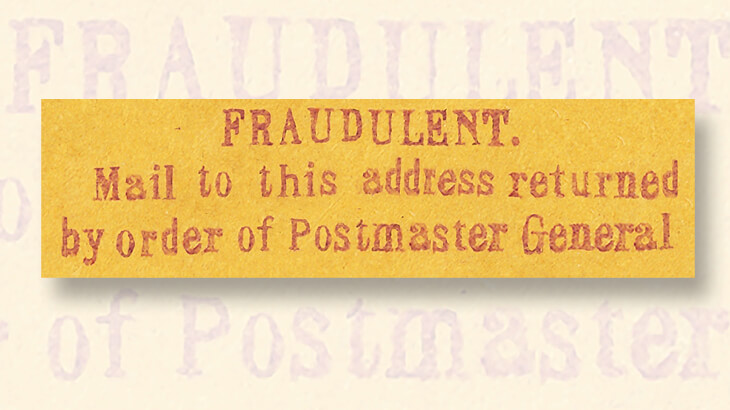 Beginning around 1900, this official postal marking was applied to mail sent to entities identified as fraudulent by postal authorities, before the mail was sent back to the writer. 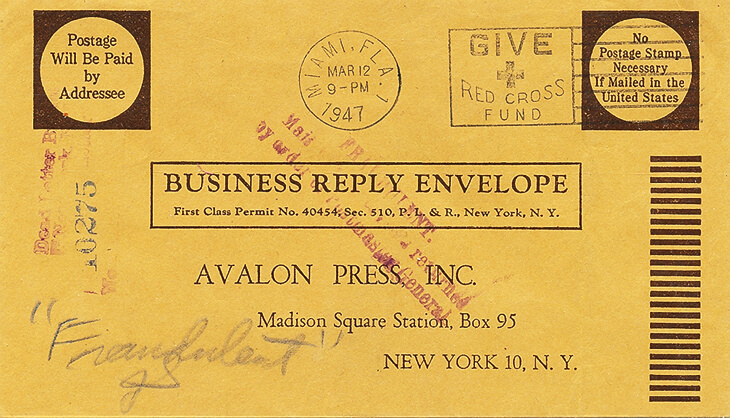 The delivery-office postmaster recognized the addressee of this business-reply envelope as a fraudulent business, but lacking a return address, could not follow postal rules and return it to the writer. A Dead Letter Office Branch opened it, found the sen 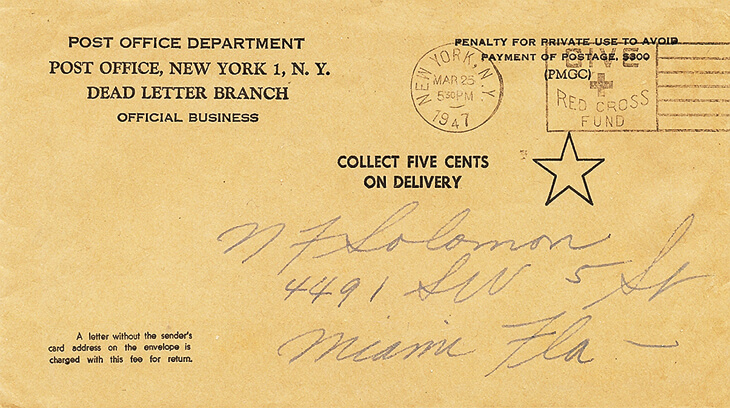 The business-reply envelope in the first illustration, addressed to a fraudulent enterprise, was enclosed in this envelope for return to the writer, with 5¢ due as the Dead Letter Branch service fee.
Previous
Next

The items pictured in this column were purchased on the online commerce website eBay this past March. I feel blessed to have found them, because they explain the very important concept of “fraudulent matter” that is first found in the 1873 Postal Laws and Regulations (PL&R).

By postal standards, fraudulent matter includes any scheme for obtaining money or property of any kind through the mails by means of false or fraudulent pretenses, representations or promises.

The next paragraphs are concerned with how fraudulent mail matter can be legally discerned and acted upon.

With a few exceptions, as will be noted, these rules of action essentially were in place from the 1873 PL&R through the 1970 Postal Manual. These rules of action changed because by 1967 the use of the term “fraudulent” was being phased out, and slowly replaced by the term “false representation.” The same type of matter was involved, just titled differently.

No person other than an employee of the Dead Letter Office or Dead Letter Branch, duly authorized thereto, or other person upon a search warrant authorized by law, was authorized to open any letter not addressed to himself.

Thereafter, a postmaster at any post office, having been notified by the postmaster general of any scheme for obtaining money or property of any kind through the mails by means of false or fraudulent pretenses, representations or promises, and encountering any such mail matter, was to return all of it (only if it was registered mail, according to the 1873 PL&R, but all such mail, registered or not, as of the 1932 PL&R) to the postmaster at the office at which it was originally mailed.

The word “Fraudulent” was to be plainly written or stamped upon the outside thereof, and all such mail matter so returned to such postmasters was to be returned by them to the writers thereof, under such regulations that the postmaster general might prescribe.

Note that only the word “Fraudulent” was to be placed on the fraudulent matter from 1873 until 1893, and “FRAUDULENT. Mail to this address returned by order of Postmaster General” from about 1900 onward.

The business-reply mail envelope without a return address in the first image beautifully illustrates a return of fraudulent matter to the writer.

In this case, the writer mailed a business-reply envelope back to a fraudulent enterprise. This was recognized by the postmaster of the delivery office of this fraudulent business, who wrote “Fraudulent” on it, but because the letter had no return address, the postmaster could not return it directly to the writer.

Thus, it was correctly sent first to a Dead Letter Branch in New York City where it was opened, the writer was determined, the envelope was rubberstamped “FRAUDULENT. Mail to this address returned by order of Postmaster General,” and the business-reply envelope was then enclosed in an outer envelope and returned to the writer as required.

This return envelope is the third one I have seen with a simple five-pointed geometric star on it. I am guessing that it is equivalent to the six-pointed Star of David marking shown in my column in the Nov. 9, 2015, Linn’s, that being a symbol indicating that the minor division of the Dead Letter Office or Dead Letter Branch handled the return of a dead letter that contained an enclosure of importance to the sender, but not of great monetary value, such as postage stamps, photographs, papers and so on.

Also, although in various official documents fraudulent matter was cited as being unmailable, in reality, as this illustration confirms, the postmaster at delivery offices most commonly noted a fraudulent item that he or she had correctly returned to the writer.

That is, the item was returned as undeliverable, not as unmailable.

No postal rule, but reality of remailing unclaimed, undeliverable mail