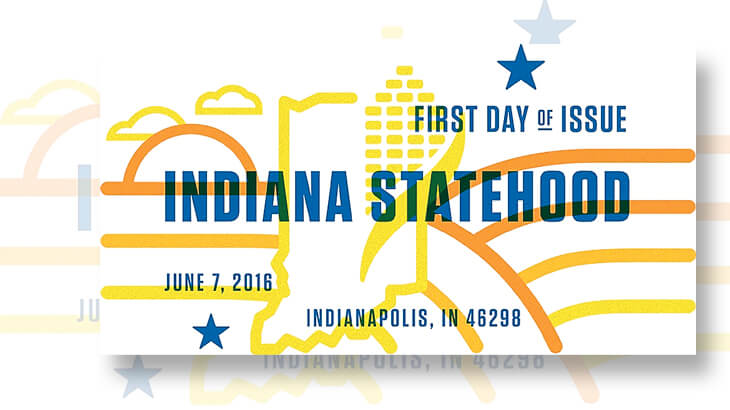 The digital color first-day postmark for the new Indiana Statehood forever stamp features graphics symbolizing a map of the state, an ear of corn, the setting sun, fields, stars, and clouds. 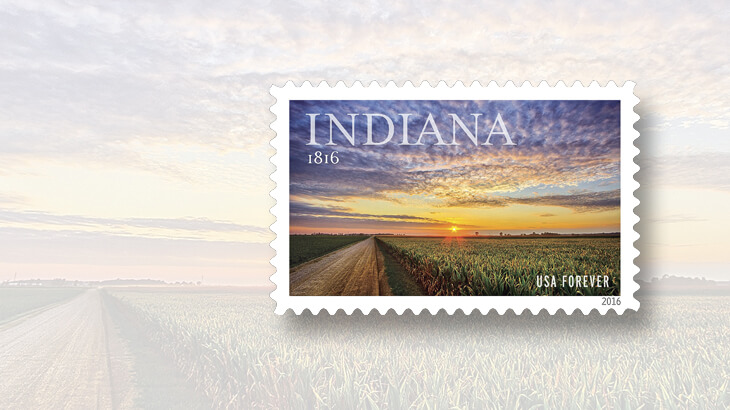 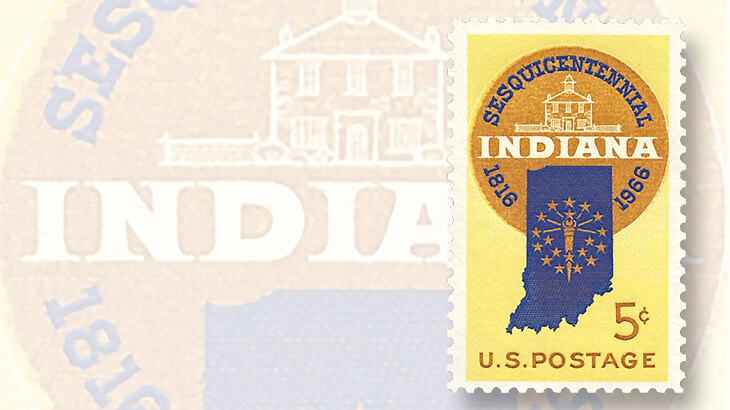 On its 150th birthday in 1966, Indiana was honored with a 5¢ stamp that included a map of the state and the sesquicentennial seal.
Previous
Next

A forever stamp commemorating 200 years of Indiana statehood will be issued June 7 with a 10 a.m. first-day ceremony at the Indiana Statehouse, 200 W. Washington St., in Indianapolis.

Jacqueline Krage Strako, USPS area vice president for the Great Lakes Area, is scheduled to be the dedicating official.

The new nondenominated (47¢) forever stamp will be issued in panes of 20. Collectors will also be able to purchase die-cut press sheets consisting of six panes (120 stamps), with 1,000 press sheets offered.

The central design features a photograph by Michael Matti of fields in northern Indiana. The photograph was taken on a dirt road just off Indiana State Road 15 in Kosciusko County, according to a Dec. 31, 2015, article by Ryan Reynolds of the Evansville Courier and Press.

Corn was ranked as Indiana’s top commodity by value in 2012, with $4 billion in sales, according to figures published by the Indiana State Department of Agriculture.

Matti was born in Indonesia and later moved to Indiana before attending Indiana Wesleyan University, according to his website. Reynolds reported that Matti took the photograph while returning home from college to visit friends.

The new stamp will arrive well ahead of the actual bicentennial date. Indiana entered the Union as the 19th state on Dec. 11, 1816.

The Indiana Territory was formed 16 years earlier, on May 7, 1800. That event was commemorated 150 years later on a 3¢ stamp that depicted territorial governor William Henry Harrison and the first Indiana capitol at Vincennes (Scott 996).

Indiana’s general assembly petitioned the U.S. Congress at the end of 1815 to grant statehood, and President James Madison signed the Act admitting Indiana into the Union the following year.

Madison County in east central Indiana is named for the fourth president.

The 150th anniversary of Indiana statehood was commemorated on a 5¢ stamp issued April 16, 1966 (Scott 1308). That stamp shows the sesquicentennial seal, a map of Indiana with 19 stars, and an image of the old capitol at Corydon.

A forever stamp marking the centennial of the annual Indianapolis 500 automobile race was issued May 20, 2011. Because several races did not take place during World War I and World War II, this year’s race scheduled for May 29 will be the 100th running.

The Postal Service will offer 30 million Indiana Statehood forever stamps. The first-day cover with digital color postmark complements the stamp with a setting sun, fields and an ear of corn, as well as graphics symbolizing a map of the state, stars, and clouds.

Technical details for the Indiana Statehood stamp and first-day cancel ordering information are given below.

Standard ordering instructions apply. Collectors requesting first-day cancels are encouraged to purchase their own stamps and affix them to envelopes. The first-day cover envelopes should be addressed for return (a removable label may be used), and mailed in a larger envelope addressed to Indiana Statehood Stamp, Postmaster, 125 W. South St., Indianapolis, IN 46206-9998. Requests for first-day cancels must be postmarked by Aug. 7.

The Postal Service’s uncacheted first-day cover for the Art Deco Bird stamp is item No. 777516 at 96¢. USPS order numbers for stamps and FDCs also appear in Linn’s 2016 U.S. Stamp Program.

Indiana town of Santa Claus celebrates its namesake in December