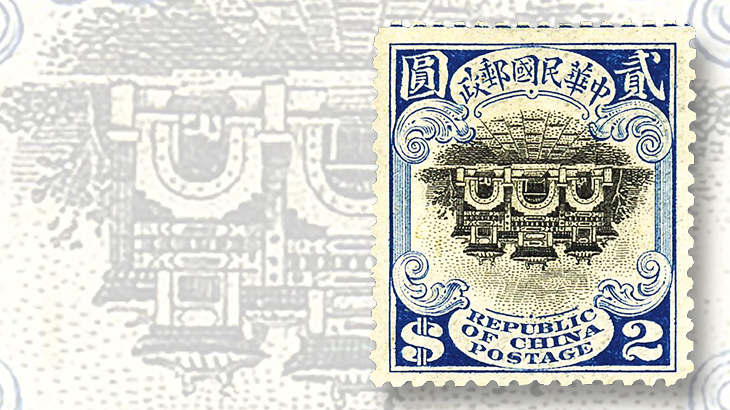 One of the great rarities of China philately, this example of the 1915 $2 Hall of Classics stamp with inverted center will be offered at auction June 7-8 by Cherrystone Philatelic Auctioneers.

A rare variety of China’s 1915 $2 Hall of Classics stamp will be offered during the June 7-8 Cherrystone auction taking place in New York City.

The stamp is the $2 blue and black of the first Peking printing, with the black central vignette of the gateway inverted in relation to the frame (Scott 237a).

“It is believed that only about 30 examples of this error are known today,” Cherrystone notes in its auction catalog description.

Cherrystone describes the perf 14 stamp in the sale as “a striking example of this rarity which is particularly well centered and with strong colors on fresh paper, with guide line at top, disturbed gum, h.r. [hinge remnant], slightly shorter perf at left, very fine gem with great eye appeal and one of the great rarities of Chinese Philately, with 2009 Pascal Scheller certificate.”

The stamp is part of Cherrystone’s auction of rare stamps and postal history of the world, including proofs, presented in four sessions over two days at the Cherrystone Auction Galleries.

Among these are five blocks of four of the dollar values of the 1893 Columbian Exposition issue (Scott 241-245). The $5 block is a left sheet margin block of four described as “perfectly centered.”

The lots are being offered individually (with the $5 block estimated at $10,000), and together as a single lot.

A couple of modern U.S. inverts are also being offered: the 1979 $1 Rush Lamp and Candleholder (Scott 1610c, also known as the CIA invert), and the 1992 29¢ Stock Exchange Bicentennial invert (2630c) in a block of four with right sheet margin showing additional vignettes.

Both of these cataloged error stamps are listed as very fine and never hinged. Cherrystone notes that only about 80 to 85 examples of the $1 invert are known, and 56 examples of the 29¢ Stock Exchange error.

From Spain comes a handsome unused block of four of the 1859 12-centavo dark orange Isabella II stamp, a stamp that the Scott catalog notes was never put in use, but which nonetheless has a major number catalog listing (Scott 48).

This lightly hinged unused block includes a dramatic variety, however: the tete-beche pair at left, which leaves the upper-left stamp printed upside down in relation to the other three.

The unused tete-beche pair (Scott 48a) is listed by Scott with a value of $5,750; Cherrystone has the block of four containing the variety pair offered with an estimate of $4,000.

The auction lots can be examined online, with online bidding available as well. Bids can also be placed prior to the sale by mail, telephone, fax or in person.