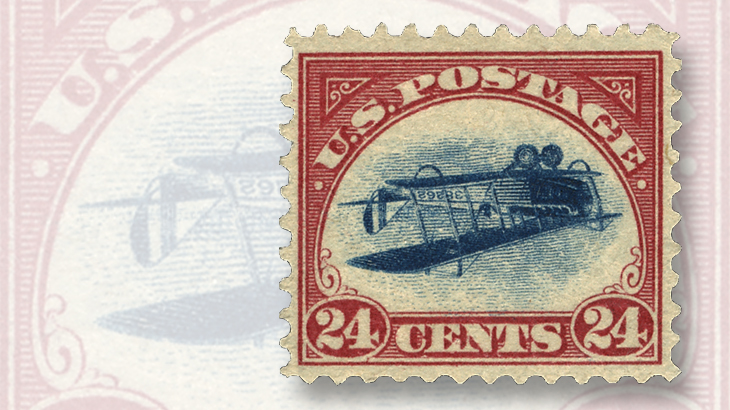 This 1918 Jenny Invert airmail error stamp, position 76 from the original pane of 100, was recovered in early April after being missing for more than 60 years. It was once part of the McCoy block of four Jenny Invert stamps that was stolen in 1955. Image 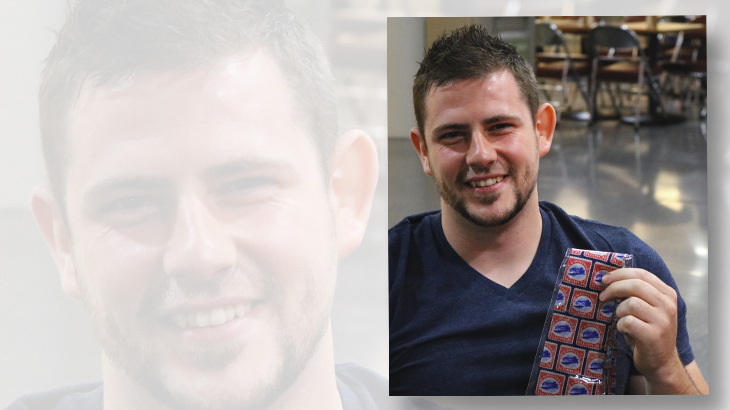 Keelin O’Neill from Northern Ireland smiles while holding an Inverted Jenny necktie offered for sale by the American Philatelic Society. O’Neill found a real Inverted Jenny, a rare United States error stamp missing for more than six decades, in a box of i
Previous
Next

The red and blue stamp was a gift from his grandfather.

“My grandfather gave me a bunch of stuff two months before he passed away,” Keelin O’Neill said in an interview May 28. “I wasn’t aware I actually had the stamp there.”

The stamp his grandfather gave him in October 2011 was an Inverted Jenny, the 1918 24¢ airmail error that shows the blue “Jenny” airplane in the middle of the design printed upside down. It’s considered the most famous of all United States stamp errors, perhaps the most famous U.S. stamp of all.

And this particular Inverted Jenny, it turns out, had been missing for more than 60 years. It was once part of an intact block of four known to collectors as the McCoy block, which was stolen from its exhibition frame in 1955 during the American Philatelic Society convention in Norfolk, Va.

But to most people, a stamp is just a stamp. And it appears that Keelin’s grandfather, who like Keelin lived in Northern Ireland, had no knowledge of this stamp’s story either.

“He never really pointed out to me what it was,” Keelin said. “He didn’t mention, ‘Oh, by the way, there’s a stamp in there that’s so rare there’s only a hundred.’ ”

The Jenny Invert was in a simple stock card, stuck inside an envelope along with an old and odd letter that seemingly described a stamp transaction that took place in New York in the 1960s.

Somewhere along the way some of the stamp’s perforations had been altered, presumably to disguise its identity, and most of its gum is now gone.

The recovery of the stamp was reported in April by Linn’s after the Spink USA auction firm and the American Philatelic Research Library revealed the find.

Keelin, in his mid-20s, decided to acknowledge that he was the finder of the stamp while attending World Stamp Show-NY 2016 in New York City.

If all goes as planned, he expects to be present when the American Philatelic Research Library takes possession of the stamp at the show on Thursday, June 2.

The stamp is from position 76 in the only sheet of 100 error stamps, and it’s now the third stamp from the purloined block of four to be recovered.

Before she died in 1980, collector Ethel McCoy, who owned the block when it was stolen, signed over her rights to the missing stamps to the APRL, now located in Bellefonte, Pa.

Scott English, the APS executive director, has been working with Keelin and federal authorities as they puzzle out the mystery and negotiate the legal hurdles.

It is expected that the stamp, currently under FBI jurisdiction and in the care of the Philatelic Foundation of New York, will be returned to the APRL.

Keelin had no idea that the single stamp tucked inside the paper envelope was one the philatelic world had long been searching for.

“I didn’t know exactly what it was,” he said, “so I did a little bit of research, and then I contacted Spink.”

At the London auction firm he was referred to its New York office, and because Keelin was planning to visit the United States on vacation, he took the stamp with him.

When he got to the New York Spink office, the staff there told him they had to take the stamp away for examination.

Soon after, he was contacted by the FBI.

“And here we are,” he said with a smile.

The story behind the stamp’s 60-year journey is still largely unknown.

“Cars pull up in a field, and sell all their stuff out of the back of their car,” he said with a laugh. “So, I used to go with him when I was a kid.”

But Keelin doesn’t really know how his grandfather wound up with the stamp. He said he didn’t think his grandfather was ever a stamp collector, so he imagines he simply bought the stamp at one of the car boot sales. Where it came from, and how it got to Northern Ireland, is likely to remain a mystery.

The box of stuff his grandfather gave him included old antique records, an antique clock — and just one stamp.

For a while Keelin didn’t really do anything with the items in the box, he just held on to them as something to remember his grandfather by.

“Once I was told that it was stolen,” Keelin said, “I wanted to give it back to the rightful owner.”

English told Linn’s that the APRL has reached an agreement with Keelin and the U.S. Attorney’s office. Asked if Keelin will be the recipient of the $50,000 reward offered in 2014 by Mystic Stamp Co. president Donald Sundman for the recovery of a stamp from the McCoy block, English said, “That would be the expectation once the stamp is safely returned.”

How does that sound to Keelin?