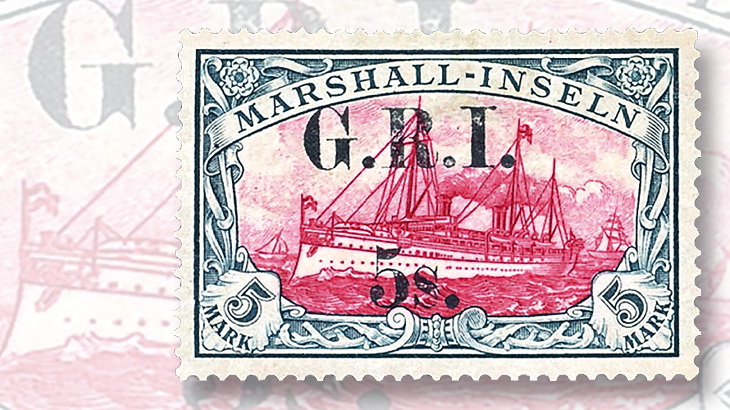 Daniel F. Kelleher Auctions of Danbury, Conn., is an official auctioneer of World Stamp Show-NY 2016, the international stamp show and exhibition taking place in New York City’s Javits Center from May 28 through June 4.

The sale offers the Adolph J. Capurro collection of mint worldwide stamps, including collections. The collection is described by Kelleher as “a truly massive, mint, fairly complete collection of the world through the issues of 1955.”

This sale features more than 900 lots, with many mint singles and sets, some lightly hinged or unused without gum, and a few used items. It also includes some 216 lots of collections mostly in unused hinged condition.

A highlight of this sale comes from the Papua New Guinea area, a single stamp listed in the Scott Classic Specialized Catalogue of Stamps and Covers 1840-1940 as New Britain Scott 67. The stamp is the 1915 5-shilling denomination surcharged on the 5-mark slate and carmine Marshall Islands issue depicting the yacht Hohenzollern that was featured on stamps from Germany’s colonies during that era.

The two-line New Britain surcharges on that 1915 issue are known with two settings, with either 6 millimeters or 5½mm of space separating the top line of the overprint (“G.R.I.”) from the bottom line (the surcharged denomination — in this case, “5s.”). This stamp has the 5½mm separation; the 2016 Scott catalog contains a description error for Scott 64-67 that will be corrected in an upcoming edition.

According to the Kelleher description, the example offered in this auction is “A fabulous rarity — believed to be one of only two recorded examples.”

For the specialist collector of the Papua New Guinea area, this auction offers a number of nice items, including a horizontal pair of the 1914 New Britain surcharged 1-penny on German New Guinea 5-pfennig green, second setting, showing the “d” inverted (Scott 17c) and the right stamp also printed with an additional cataloged variety, the “1” with the straight top serif.

The auction begins with more than 300 lots of British Commonwealth material organized by country and colony, and continues with Europe and colonies, Asia, Middle East, Africa, and Latin America before concluding with collections.

France and French Colonies are also well represented in this sale with a number of important items. A single mint never-hinged 1880 1-centime Sage Type II stamp in black on Prussian blue (Scott 87) is offered with a 1991 Philatelic Foundation certificate.

“Only a very few collectors can own the 1c Prussian blue in such a marvelous state of preservation,” Kelleher notes.

The Kelleher website offers the illustrated auction catalog in page-flip form or as downloadable PDF files, but items also can be viewed individually with an easy-to-use online listing.

Other auctions at World Stamp Show-NY 2016:

Gaertner Worldwide Rarities auction at World Stamp Show-NY 2016 May 30
In switch, Gross Switzerland collection sold privately; his Hawaii will be offered at New York show instead