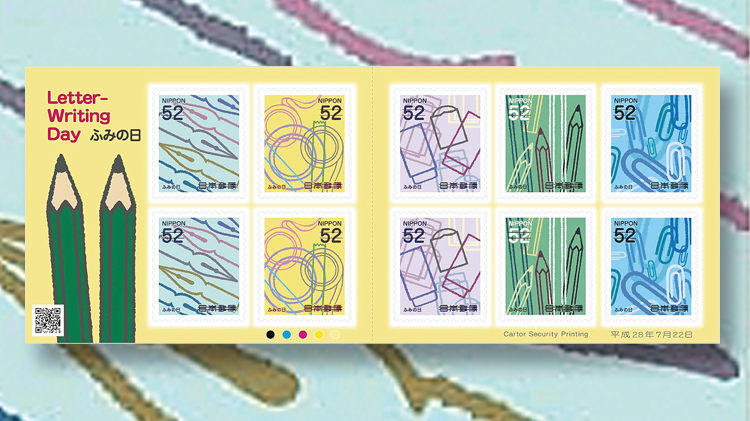 Japan is celebrating Letter Writing Day, July 23, with panes of stamps showing utensils and other items that can be needed when writing letters by hand. This pane of 10 52-yen stamps and another pane of 82y stamps will be issued July 22. 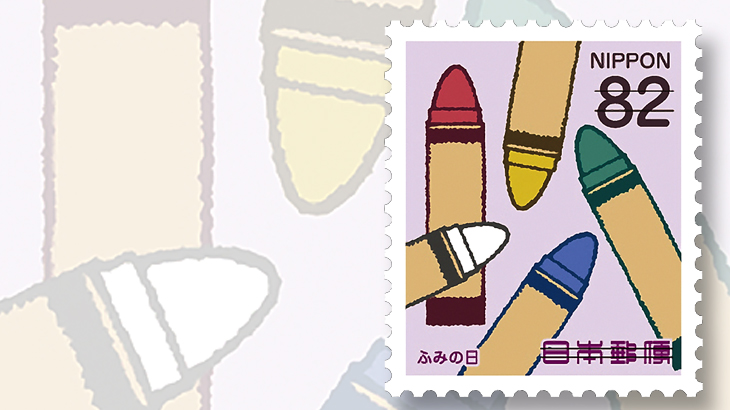 One of the 82-yen stamps in a Letter Writing Day pane from Japan depicts colorful crayons. 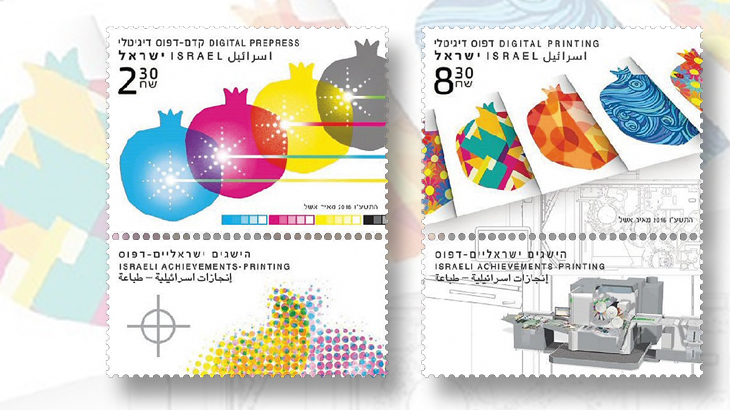 A pair of stamps from Israel honors achievements in digital printing and uses symbolic pomegranate in different colors to show digital pre-press and printing processes. 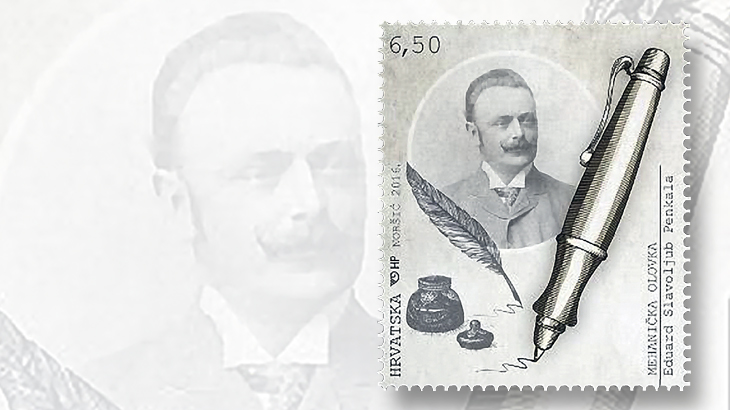 A stamp from Croatia commemorates the invention of the automatic, or mechanical, pencil by Eduard Slavoljub Penkala in 1906.
Previous
Next

Since 1979, Japan has celebrated Letter Writing Day on July 23 by issuing stamps for the day.

This year’s stamps show some of the tools you may need when writing letters by hand.

The stamps will be issued July 22 in two panes of 10, similar to convertible booklet panes from the United States Postal Service.

For letter writers who make mistakes, erasers are represented on the stamp with the lilac background.

Tape and paper clips, both of which can be used to attach items to letters, are pictured on the other two designs.

The writing utensils included on the 82-yen stamps are more colorful. One design depicts crayons, and another shows colored pencils. A third stamp pictures fountain pens.

Different sizes of envelopes are displayed on the other two 82y stamps.

Hoshiyama Rika created the designs for the Letter Writing Day stamps and panes, and Cartor Security Printers printed them.

Croatia honors Eduard Slavoljub Penkala as the inventor of the automatic pencil, also called a mechanical pencil, on a 6.50-kuna stamp issued April 27.

The stamp depicts Penkala and this invention, along with a quill pen and an ink bottle.

Shortly after moving to Zagreb in 1902, Penkala received his first patent for a rotating toothbrush, reportedly invented in an effort to get his daughter to brush her teeth.

In January 1906, he received a patent for the mechanical pencil, and another one the next year for the solid-ink fountain pen.

In announcing the stamp, Croatia’s post office, Hrvatska Posta, said: “The automatic pencil by engineer Penkala did not need sharpening and its thin black lead refill (graphite) was coming out from the pencil body when pressed against paper as it was used up. Today, when an average person cannot imagine life without PC [personal computers] and electronic mail, the invention by Penkala may not seem revolutionary, but more than hundred years ago it indeed changed the world of stationery.”

Penkala also manufactured his automatic pencils and pens, and later he collaborated with Edmund Moster to establish the Penkala-Moster Company. Now called TOZ Penkala, it remains a leading manufacturer of school and office supplies in central and southeastern Europe.

A 5k stamp issued at the same time commemorates the invention of the torpedo by Giovanni Biagio Luppus in 1861.

Ariana Norsic designed the two stamps. Zrinski printed them by offset in panes of six.

In announcing the stamps, Israel Post said: “The printing industry is one of the five largest industries in the world. Since the 1980s, Israeli companies like Scitex and Indigo have integrated innovated digital technologies into production processes, thereby contributing greatly to increasing the efficiency of the industry.”

The design of the 2.30-shekel stamp represents digital prepress, the processes that occur before digital printing. It depicts laser beams shining on symbolic pomegranates in the four colors used in process printing: cyan, magenta, yellow and black.

More pomegranates are pictured on the 8.30s stamp.

Israel Post said of this design: “Using an image of a pomegranate, this stamp illustrates the Indigo digital printing process where every image can be different in both color and shape. It also features a diagram of the inside of an Indigo press.”

An Indigo 1000 press is pictured on the tab, the label attached to the bottom of the stamp.

Meir Eshel designed the two stamps. Cartor Security Printing printed them by offset in sheets of 15 stamps and five tabs.

Read about other recently issued stamps: