Natural scenery, beautiful sights on National Parks set of 16 to be issued June 2 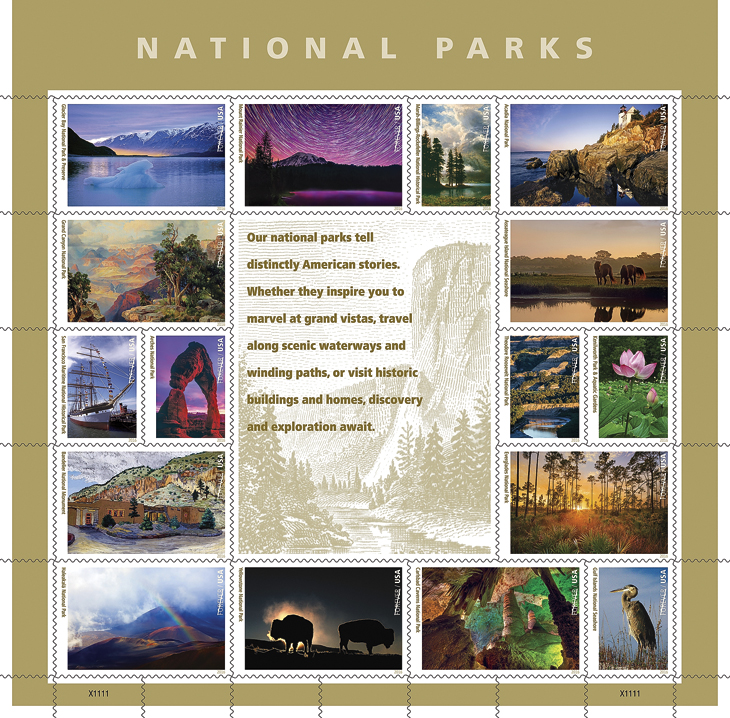 The pane of 16 National Parks stamps includes 10 larger horizontal stamps and six smaller vertical stamps. The pane will be issued June 2 with a first-day ceremony at World Stamp Show-NY 2016. 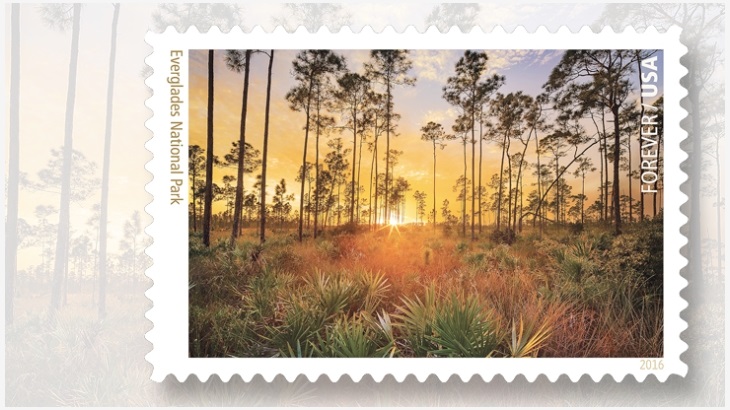 Everglades National Park in Florida is featured on one of the 16 stamps in the National Parks set that will be issued June 2 in New York City.
Previous
Next

Sixteen national parks from across the United States are featured in a new stamp pane being issued June 2.

A first-day ceremony for the set will take place at 11 a.m. during World Stamp Show-NY 2016 at the Javits Center in New York City. Postmaster General Megan Brennan is scheduled to be the U.S. Postal Service’s dedicating official at the ceremony, which is free and open to the public.

“These stamps celebrate the 100th anniversary of the National Parks and depict the beauty and diversity of these national treasures,” said Brennan. “They serve as an inspiration for Americans to visit, learn and to write cherished memories of their trips to these incredible wonders.”

The nondenominated (47¢) forever stamps commemorate the establishment of the National Park Service, the result of an act signed into law by President Woodrow Wilson in 1916.

The stamp designs show full-color photographs or paintings of scenes from each park represented. Many of the designs bear some resemblance to the popular Scenic American Landscapes airmail stamps issued between 1999 and 2012 (Scott C133-C150). Several stamps from that earlier set also picture photographic images from national parks.

The image at the center of the stamp pane, rendered in light brown, shows the El Capitan rock formation at Yosemite National Park in California, in a detail from the 1934 1¢ green Yosemite stamp (Scott 740).

Text printed across the illustration states, “Our national parks tell distinctly American stories. Whether they inspire you to marvel at grand vistas, travel along scenic waterways and winding paths, or visit historic buildings and homes, discovery and exploration await.” Additional text is printed on the back of the pane.

The stamps and pane were designed by USPS art director Ethel Kessler. The stamps are arranged in two sizes on the pane, with six smaller vertical stamps measuring 0.91 inches by 1.19 inches (the same size as stamps on most double-sided panes of 20, convertible booklet format), and 10 larger horizontal stamps measuring 1.82 inches by 1.19 inches (a little larger than a typical commemorative, such as the Lunar New Year issue).

Technical details for the National Parks stamps, including photographer and artist credits, appear below, along with first-day cancel ordering information.

Standard ordering instructions apply. Collectors requesting first-day cancels are encouraged to purchase their own stamps and affix them to envelopes. The first-day cover envelopes should be addressed for return (a removable label may be used), and mailed in a larger envelope addressed to National Parks Stamps, Special Events Coordinator, 380 W. 33rd St., New York, NY 10199-9998.

Requests for first-day cancels must be postmarked by Aug. 2.

The Postal Service’s set of 16 uncacheted first-day covers for the National Parks stamps is item 560616 at $14.56. USPS item numbers for stamps and FDCs also appear in Linn’s 2016 U.S. Stamp Program.

Fourteen of 16 U.S. National Parks stamp designs have been revealed