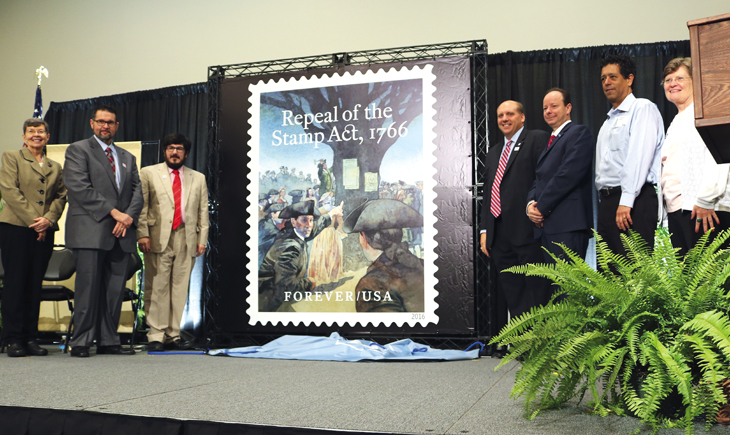 The United States Postal Service introduced its new Repeal of the Stamp Act forever stamp with an 11 a.m. first-day ceremony during World Stamp Show-NY 2016 at the Javits Center in New York City.

The event was guided by New York City postmaster Kevin J. Crocilla, who served as master of ceremonies.

The theme of the ceremony was history, celebrating the event commemorated on the new stamp, the 1766 repeal of the Stamp Act, a tax imposed by the British upon the colonists to pay for the defense of the colonies.

Michael J. Elston, associate general counsel and chief ethics and compliance officer for the USPS, was introduced as a relative of George Washington, eight generations removed.

The audience laughed when Elston opened by asking if anyone in attendance was from the United Kingdom, and then apologizing in advance for his remarks.

Elston spoke about the important event the new stamp recalled, and said, “The dedication of this stamp today, Learning Never Ends Day, commemorates the 250th anniversary of this monumental act of defiance, and the beginning of a movement that would establish the United States of America as a free and independent nation.”

English also commended the historic theme of the stamp, and recommended it as a good stamp to offer to youngsters to reinforce an interest in stamps in history.

“When you go to the Postal Service booth upstairs and buy a sheet of these stamps,” he said, “I want you to buy two.

“Share it with a young person, because you’re not only teaching them about the wonders of stamps, but the history behind it.”

Piazza explained that the new stamp was the first of two to make use of elements from the National Postal Museum’s collections.

“Wednesday’s Classics Forever miniature sheet was engraved from six original proofs in the museum’s collection. And the red proof of the 1765 tax stamp that’s in the selvage of today’s release was one of the first philatelic items ever collected by the Smithsonian Institution. We’ve owned it since 1889,” Piazza said.

Piazza connected the stamp with the real issue of censorship, which revolved around the 1-penny stamp designated for newspapers and pamphlets.

“So if a publisher proved troublesome to the royal authorities, he could be put out of business instantly by his supply of stamp paper being cut off,” he said.

Piazza noted that another legacy of the stamp act was Benjamin Franklin’s use of the “B. Free Franklin” manuscript postmark.

The stamp is issued in a small pane of 10, with a selvage imprint that includes the inscription, “Taxation without representation is tyranny.”