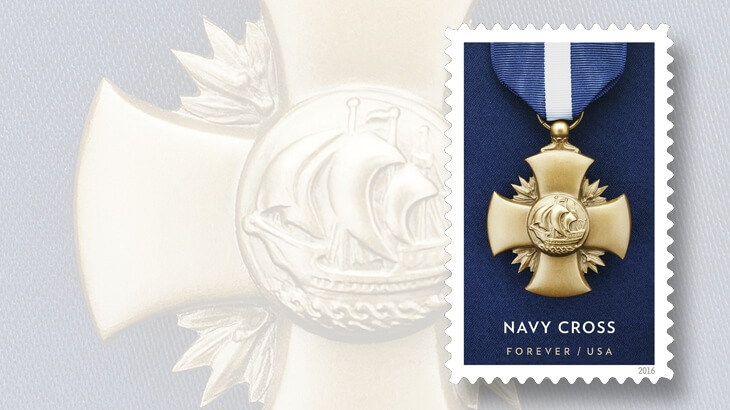 The stamp set will be issued May 30 in New York City. This stamp pictures the Navy Cross medal. 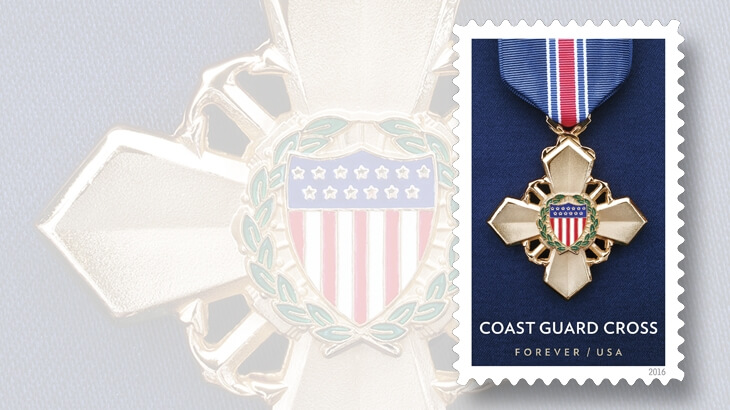 The Coast Guard Cross, instituted in 1910, has not yet been awarded. 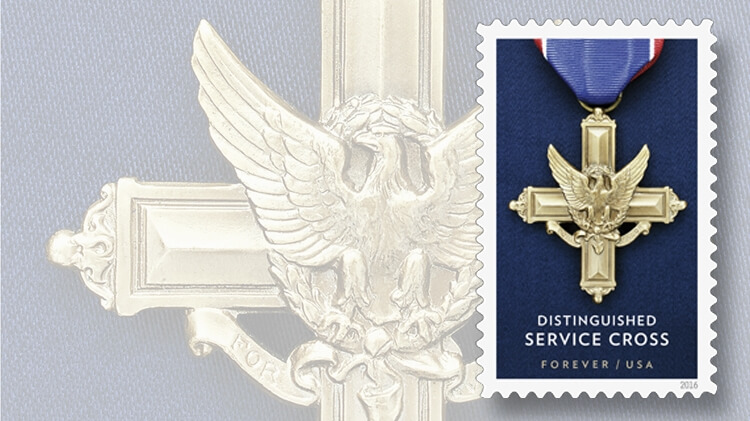 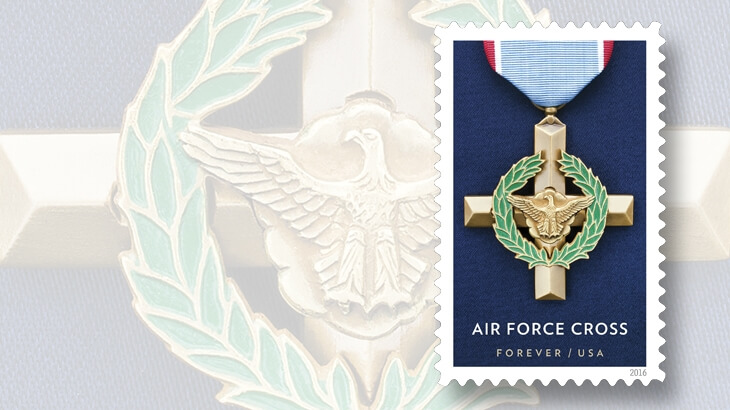 The Air Force Cross pictured on this stamp was established in 1960.
Previous
Next

Four United States forever stamps will be issued May 30 in a single pane of 12 featuring U.S. military medals honoring valor in combat: the Army’s Distinguished Service Cross, the Navy Cross for the Navy and Marine Corps, the Air Force Cross, and the Coast Guard Cross.

Each stamp depicts one of the four medals suspended from a ribbon and shown against a dark blue backdrop. The medals were photographed by Richard Frasier, and the stamps were designed by Greg Breeding.

“This issuance continues a Postal Service tradition of honoring the bravery and achievements of members of the U.S. Armed Forces,” the Postal Service stated.

“These decorations are awarded for acts of extraordinary heroism in which an individual braved enemy fire, made bold decisions, and took selfless actions to rescue or protect fellow service members.

“The Distinguished Service Cross was the first of these awards to be established, in 1918, followed the next year by the Navy Cross.

“The Air Force Cross was instituted in 1960, following the creation of the Air Force as a separate military service independent from the Army. The Coast Guard Cross was only recently instituted, in 2010, to recognize its members for qualifying actions taken when not operating under the Department of the Navy or during military operations against international terrorists. This decoration is yet to be awarded.”

The stamps will be issued with a first-day ceremony Monday at 11 a.m. during World Stamp Show-NY 2016 at the Javits Center in New York City. The stamp show and the ceremony are both open to the public with no admission fee.

Along with the pane of 12 offset-printed stamps, the Postal Service is issuing 3,000 press sheets for the Service Cross Medals issue, all with die cuts.

Technical details and first-day cancel ordering information for the Service Cross Medals forever stamps are given below.

Standard ordering instructions apply. Collectors requesting first-day cancels are encouraged to purchase their own stamps and affix them to envelopes. The first-day cover envelopes should be addressed for return (a removable label may be used), and mailed in a larger envelope addressed to Honoring Extraordinary Heroism: The Service Cross Medals Stamps, Special Events Coordinator, 380 W. 33rd St., New York, NY 10199-9998.

Requests for first-day cancels must be postmarked by July 30.

What else to expect at World Stamp Show-NY 2016: