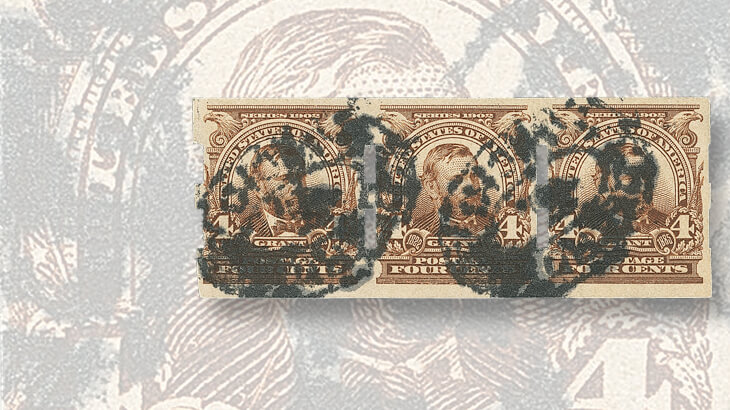 Offered for the first time since 1980, this used strip of three of United States Scott 314A is the sole off-cover multiple of this elusive stamp available to collectors. It is estimated at $157,500 in the May 31 Siegel Rarities sale. 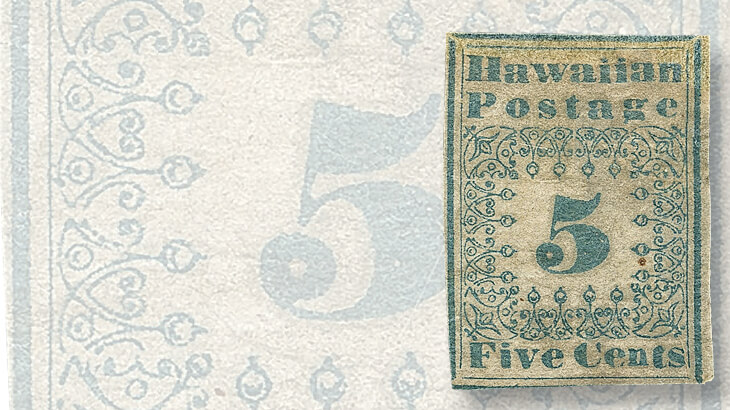 Included among the U.S. possessions items in the May 31 Rarities sale is this unused 5¢ Hawaiian “Missionary” stamp of 1851, one of just 10 available to collectors. Siegel describes this stamp, which is repaired at top, as having “far better appearance th 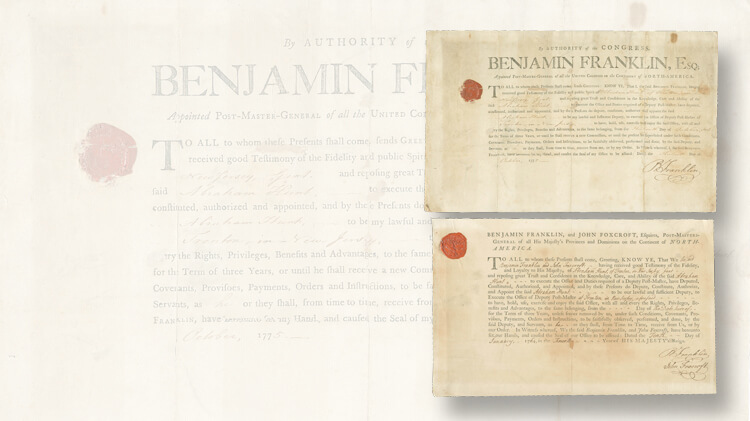 Also included in the May 31 Siegel Rarities sale is this pair of postmaster’s commissions signed by Benjamin Franklin, the first when he was King George III’s postmaster for England’s North American colonies and the second, dated 1775, when Franklin was a 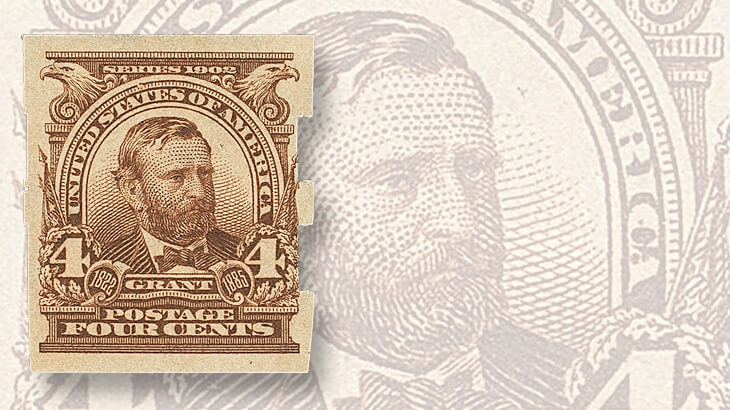 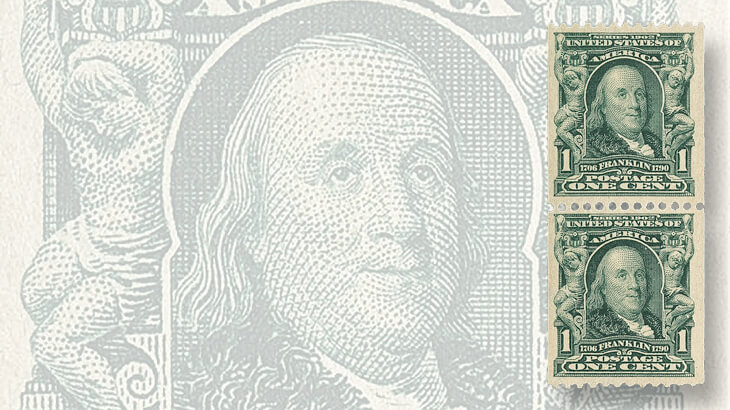 A standout item in the May 31 Rarities sale is an early experimental government-issued coil, the 1¢ Franklin vertical coil of the 1902 series (Scott 316), which was in use, unheralded, for less than a year. Siegel sold this pair in 2009 for $253,000. Sieg 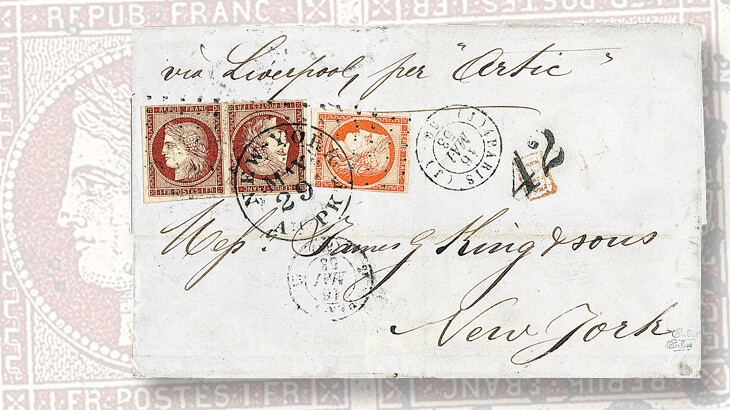 This 1853 cover bears a pair of the 1849 1-franc Ceres in the popular tete-beche variety, where a plate flaw resulted in one stamp being printed upside down in relation to its neighbors (Scott 9a). It was marked for carriage on the American packet steamer 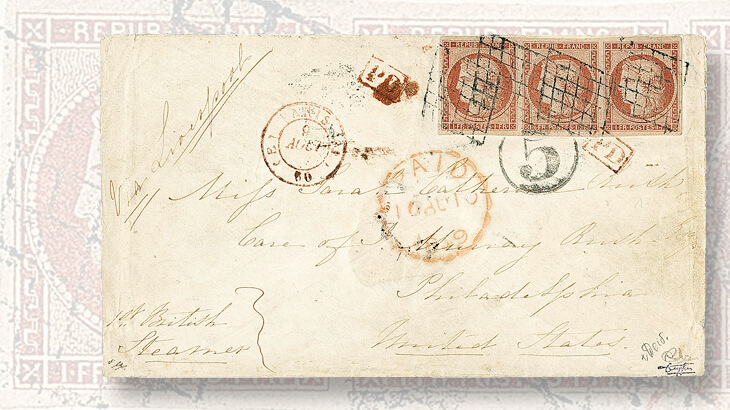 This 1849 British packet cover to Philadelphia is franked with a strip of three of the France 1-franc dull vermilion Ceres, the only such example of this scarce shade on a cover to the United States. It carries an estimate of $100,000 to $150,000 in the M 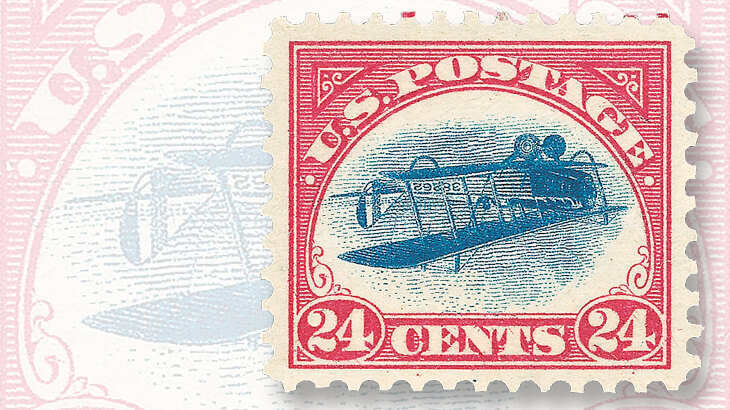 Siegel’s May 31 Rarities of the World sale at World Stamp Show opens in grand fashion: with the sale of the finest graded 1918 United States Jenny Invert airmail error, position 58 from the original error pane of 100. Siegel last offered this stamp in a 2 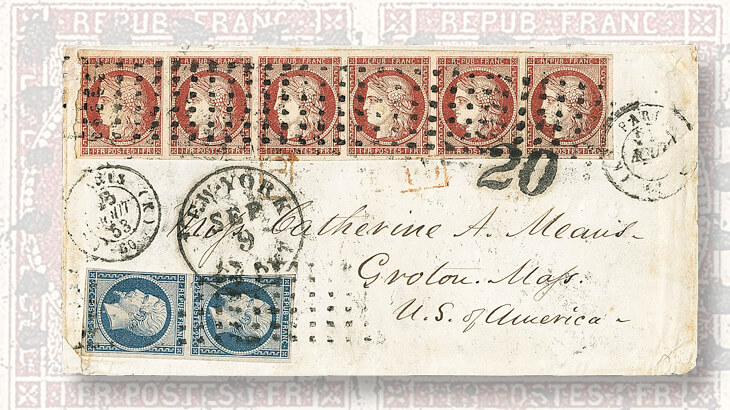 Robert Siegel Auction Galleries will sell the second part of the Steven Walske collection of trans-Atlantic mail between the United States and France May 29 at World Stamp Show-NY 2016. Among the gems to be offered is this 1853 cover franked with a strip 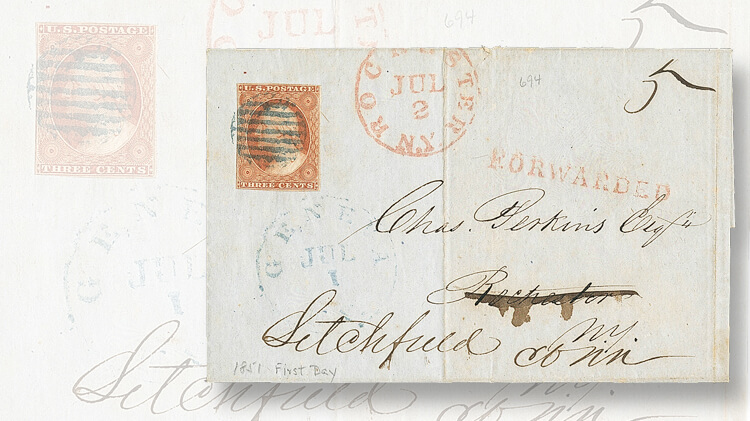 Other desirable postal history items in the May 31 Rarities sale include this 1851 folded letter that documents two different postal rates inaugurated that same year. The 3¢ Washington stamp is postmarked July 1, the first day it was issued. Siegel estima
Previous
Next

The second part of Steven Walske’s collection of trans-Atlantic mail between the United States and France will be offered by Robert A. Siegel Auction Galleries on Sunday, May 29, at 3 p.m.

The sale is part of an extraordinary six-day run of auctions by five firms in conjunction with World Stamp Show-NY 2016. This sale takes place in room 1E03 of the Javits Center in Manhattan, the show’s venue, following the sale of William H. Gross’ Hawaii collection at 1 p.m. (A preview of that sale appeared in the May 23 Linn’s.)

Walske is one of the pre-eminent postal historians of our time. His collection documents the evolution of how mail between the United States and France was handled and paid in the years leading up to the establishment of the Universal Postal Union in 1874.

“Working in concert with leading scholars and professionals on both sides of the Atlantic, Steve has helped unravel many of the mysterious and misunderstood aspects of pre-U.P.U. mail exchange between the U.S. and France,” wrote Siegel’s president and auctioneer Scott R. Trepel in the introduction to the sale catalog.

“Steve set out to create a comprehensive survey collection of the postal rates, routes and markings on steamship packet mail [between the two countries] during the period from July 1840 to December 1875,” Trepel continued.

The first part of the collection, sold by Siegel in March, focused on covers that had originated in the United States. That sale was reported in Linn’s on April 18. The second part, offered this month, looks mostly at mail from France.

The exchange of mail across the ocean during this time period was governed by a succession of either Anglo-French or U.S.-French treaties, or, in the periods when these had lapsed, by interim rules. For long periods, each country was responsible for collecting its own share of the postage, which meant that every letter was sent both prepaid and with some postage due. The charges could be significant.

Things could also get complicated. For starters, weights were calculated differently on opposite sides of the Atlantic: in France, by 7.5-gram increments, but in the United States by half-ounces.

Rates depended on which country’s boat carried a letter. When mail was obliged to pass through England, transit fees could be added, bringing another layer of complexity.

There were even “phantom” postal rates at one point in 1870 — unpublished rates offering advantages to those in the know. Small wonder, then, that the advent of the UPU, which simplified, standardized, and reduced the cost of international postage, would be heralded as such a boon.

Somehow, Walske managed over the years to thoroughly document and illustrate all this confusion. His collection won a large gold award in 1997.

“Having completed all possible rate/route combinations — the only time this has been achieved — Steve made the decision to sell,” wrote Trepel.

One 1853 cover from Paris to Groton, Mass., bears a strip of six of France’s 1849 1-franc Ceres stamp in a cerise, or cherry, shade (variety of Scott 9, listed in the French Yvert catalog as 6d), together with a pair of 25-centime stamps of the President Napoleon issue (Scott 11).

The 1fr was the top denomination in France’s first stamp issue of 1849, and this strip is the largest recorded multiple of that scarce shade, which was used only during August 1853.

The cover is also interesting because although the franking represents five times the French 13-decime (130 centimes) rate, in the United States its weight was measured differently, and the recipient was charged only four times the 5¢ inland rate, noted by a bold, handstamped “20” above the address. The cover is estimated at $30,000 to $40,000.

Two other covers in the Walske sale bear the 1849 1fr Ceres in the popular tete-beche variety, where a plate flaw resulted in one stamp being printed upside down in relation to its neighbors (Scott 9a). These are the only two tete-beche pairs known of this stamp in the carmine shade.

The highlight of the sale is a strip of three of the 1fr Ceres in dull vermilion (variety of Scott 8; Yvert 7b) on an 1849 British packet cover to Philadelphia. It is the only known example of this very scarce shade on a cover to the United States. It is estimated at $100,000 to $150,000.

Siegel will hold a second day of auctions at World Stamp Show-NY 2016 with its annual springtime Rarities of the World sale on Tuesday, May 31.

First across the block is a single-stamp sale of the famous 1918 Inverted Jenny airmail error (Scott C3a): in this case, position 58 from the original error pane of 100.

This stamp, which once belonged in the famed Robert Zoellner collection, is considered one of the finest examples extant. Many are off-center or damaged (or both); this one, very lightly hinged and graded extremely fine-superb 95 by the Professional Stamp Experts firm, “is the only Inverted Jenny to have met the rigorous standards for the XF-Suberb 95 grade,” according to Siegel. The next-highest graded example is VF-XF 85.

The Scott Specialized Catalogue of United States Stamps and Cover’s “U.S. Specialized by Grade” section does not value Scott C3a at that rarefied level; PSE’s Stamp Market Quarterly, which does, assigns it a putative value of $1.6 million.

Zoellner apparently bought this example after his previous Inverted Jenny fell out of his album one day and disappeared. He eventually found it — inside the vacuum cleaner, somewhat the worse for wear.

Position 58 was part of a block of four inverts until the early 1970s, when the dealer Raymond Weill divided it into four singles for the four heirs of its then-owner. When Siegel offered this example in 2005, it shattered previous price records, selling for $577,500 (including a 10 percent premium).

Adding to the excitement for this sale is the fact that Siegel is the lead sponsor of the appearance of an actual Jenny biplane at World Stamp Show-NY 2016. The vintage aircraft, which still flies regularly at the Old Rhinebeck aerodrome north of New York City, will be on display in the lobby of the Javits Center throughout the show. This is thought to be the first time that an example of the invert error has ever “met” the plane depicted on it.

The Rarities of the World sale is a bit of a misnomer: It consists of stamps and covers only from the United States, its possessions, and the Confederate States.

It kicks off with a pair of postmaster’s commissions signed by Benjamin Franklin, the first when he was King George III’s postmaster for England’s North American colonies and the second, dated 1775, when Franklin was already acting under the authority of the Continental Congress. The two are estimated at $30,000 to $40,000.

A fascinating 1851 folded letter shows two different postage rates inaugurated that year. A 3¢ orange-brown Washington stamp, type II (Scott 10A), is postmarked on July 1, its first day of issue, for the new prepaid rate introduced that day. The letter was then forwarded, unpaid, and marked 5¢ due for an unpaid letter. It is estimated at $12,500.

Among 20th-century issues are some rare experimental coils, including an unused example of the imperforate 1902 4¢ Grant stamp, issued in 1908 with privately applied Schermack type III oblong perforations (Scott 314A).

Just 50 of these stamps, which were supplied by the post office to a Detroit firm innovating with stamp-vending and affixing machines, reached the collector market via a local dealer, Karl Koslowski. This lightly hinged example is estimated at $100,000.

A used strip of three of the same stamp is offered for the first time since 1980. It is the only off-cover multiple of Scott 314A available to collectors and is estimated at $157,500, the Scott catalog value of three singles.

The star lot is an early experimental government-issued coil, the 1¢ Franklin vertical coil of the 1902 series (Scott 316), which was in use, unheralded, for less than a year before being superseded by the Washington-Franklin issue of 1908. Just 12 pairs and a single have been certified genuine for this issue; none is known used. The pair was sold in 2009 as part of the Whitman collection for $253,000, and is offered now with a $300,000 estimate.

Among U.S. possessions is a lovely-looking, unused 5¢ Hawaiian “Missionary” stamp of 1851, one of just 10 available to collectors. All but one of the known examples is faulty to some degree. Although repaired at top, the example in this sale is “of far better appearance than normally seen.” It is valued at $55,000.

All lots will be subject to Siegel’s standard 15 percent buyer’s commission. The Rarities of the World sale catalog can be downloaded free from Siegel's website, or a printed edition can be ordered by writing to Siegel at 60 E. 56th St., 4th Floor, New York, NY 10022, or calling 212-753-6421.

Viewing for the Walske collection will take place at World Stamp Show-NY 2016 on Saturday, May 28 at Siegel’s super booth, 1229. Prior to that, it can be viewed by appointment at Siegel’s offices.