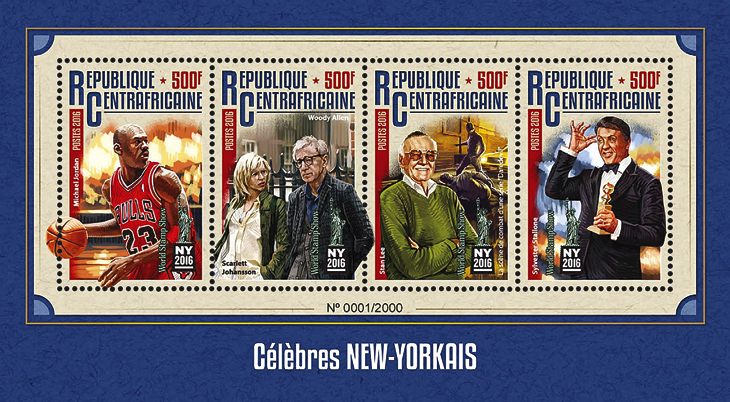 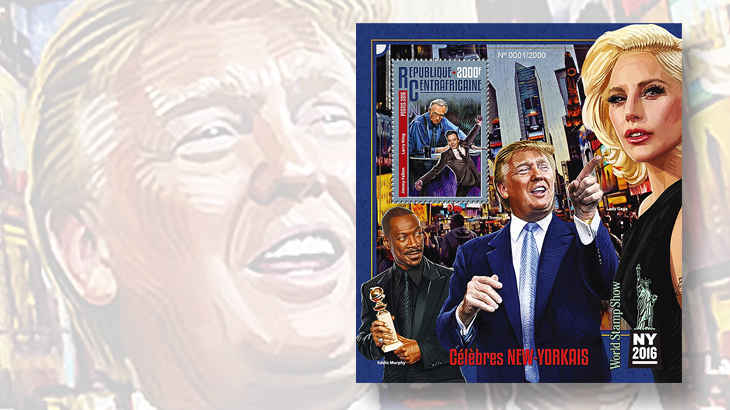 Donald Trump, Lady Gaga and Eddie Murphy are pictured in the border area of this souvenir sheet from the Central African Republic. Larry King and Jimmy Fallon are shown on the postage stamp. 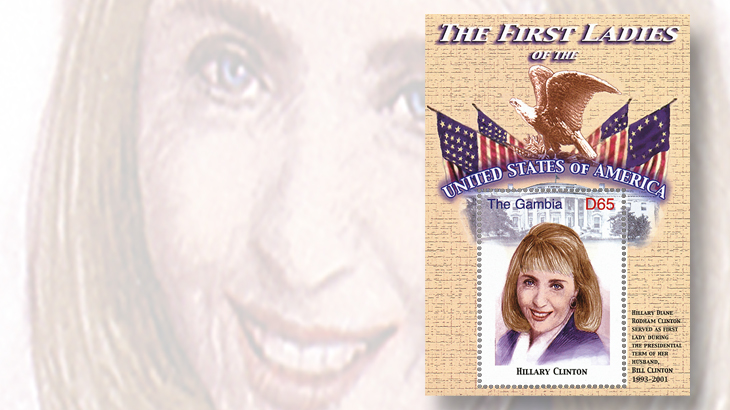 Among the stamps that picture Hillary Clinton is this one on a souvenir sheet from the Gambia, part of its First Ladies of the United States of America series.
Previous
Next

Donald Trump is among those honored as New York celebrities on a stamp issue from the Central African Republic.

The stamps are being issued to commemorate World Stamp Show-NY 2016, an international stamp exhibition taking place May 28 through June 4 in the Javits Center, 655 W. 34th St., in New York City. At this show, the post office of the Central African Republic is being represented by Stamperija, a postal agency located in Vilnius, Lithuania.

Trump is not actually shown on a stamp in this issue, but in the border, or selvage, of a large souvenir sheet. Pictured along with Trump in the souvenir sheet’s selvage are Lady Gaga on the right and Eddie Murphy with a Golden Globe award on the left. The sheet is inscribed in French “Celebres NEW-YORKAIS” and includes the World Stamp Show-NY 2016 emblem featuring the Statue of Liberty in the lower right.

Both Jimmy Fallon and Larry King are shown on the 2,000-franc stamp in this souvenir sheet.

This Central African Republic issue includes another sheet. This sheet contains four se-tenant (side-by-side) 500fr stamps picturing Michael Jordan playing basketball, actors Scarlett Johansson and Woody Allen walking together, Stan Lee with a scene from a film based on his Marvel comic Daredevil in the background, and Sylvester Stallone holding the Golden Globe award he won for Creed.

Although the stamp issue makes no mention of politics, because Trump is the presumptive GOP presidential nominee, it leads to the question if Hillary Clinton has appeared on any postage stamps. The answer is yes. She has been featured on stamps both as first lady, including on a souvenir sheet from The Gambia, and as secretary of state.