A United States Navy Color Guard presents the U.S. flag during the opening ceremony for World Stamp Show-NY 2016 May 28 at the Jacob K. Javits Convention Center in New York City. 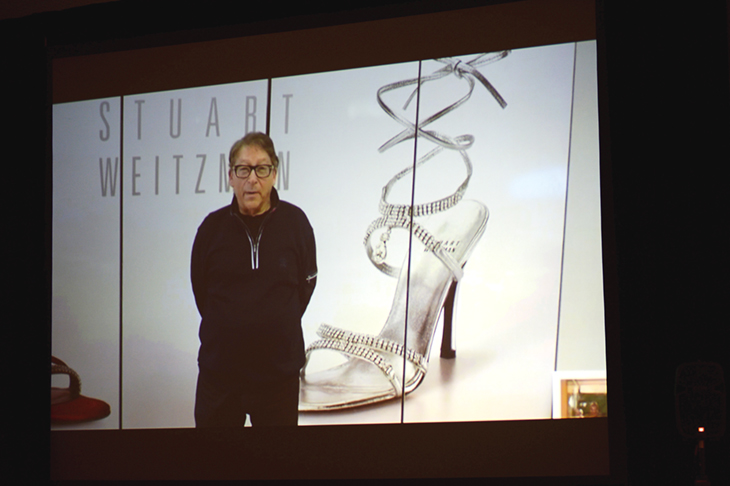 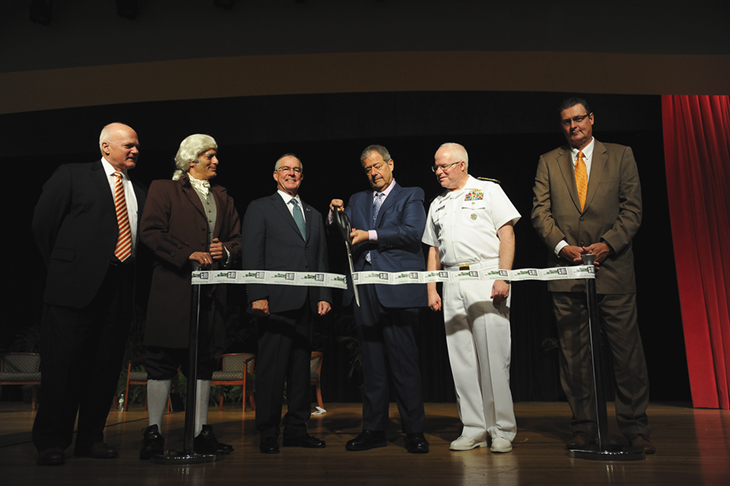 The guests on stage gathered near the podium to conclude the opening ceremony with a ceremonial ribbon cutting by Wade Saadi, president of World Stamp Show-NY 2016. The once-a-decade international exhibition runs through June 4 at the Javits Center in Man 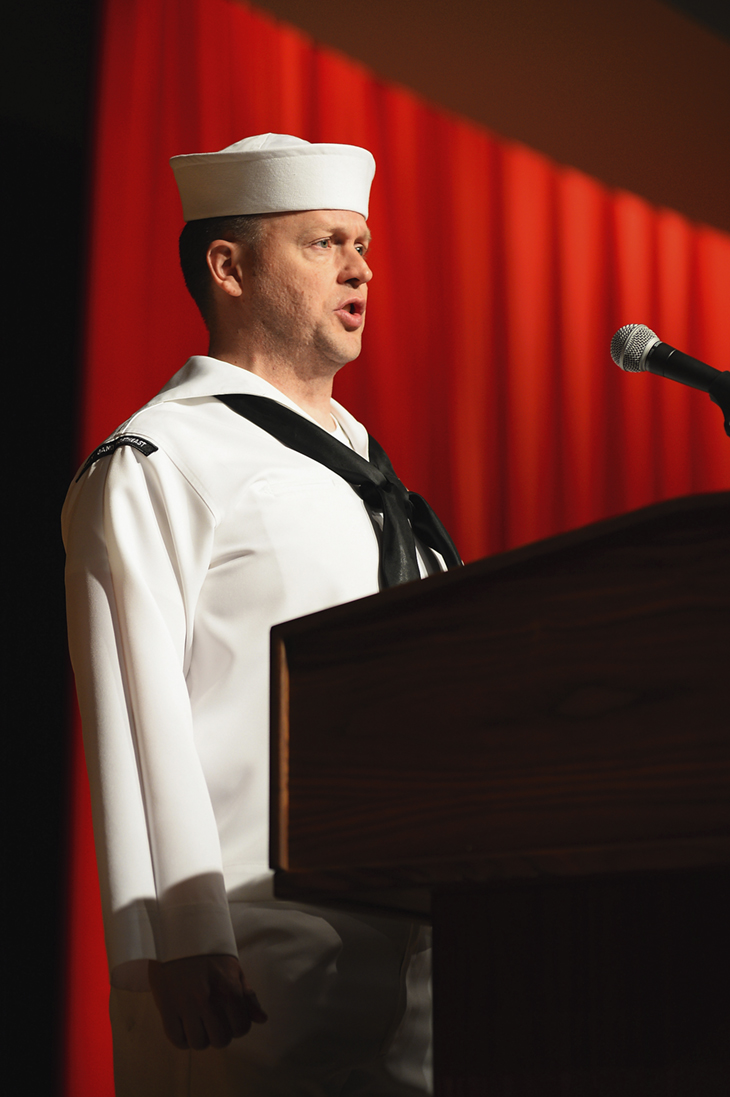 MFC Dan Smith of the U.S. Navy sang the national anthem at the WSS opening ceremony. 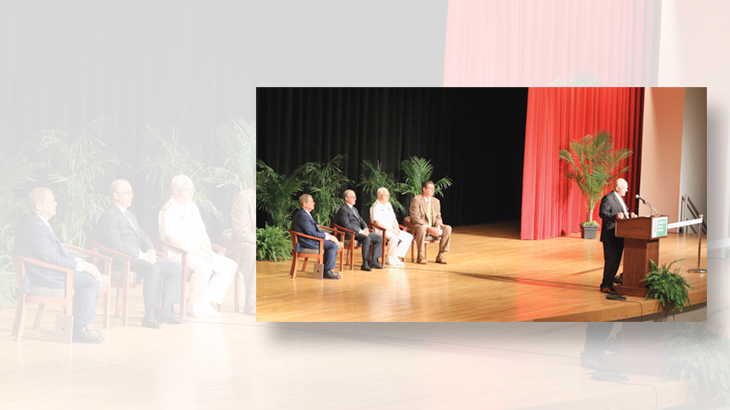 Master of ceremonies Jamie Gough described the presentation of colors and the singing of the Star Spangled Banner during the opening ceremony. 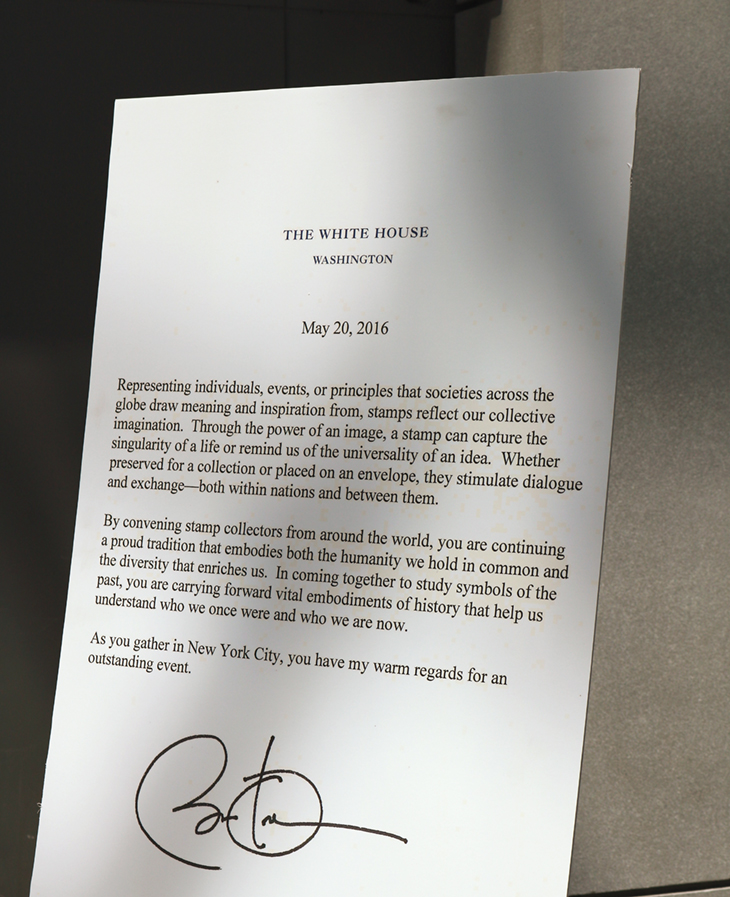 Although he could not attend the opening day festivities for World Stamp Show-NY 2016, President Barack Obama wished show participants “warm regards for an outstanding event.” 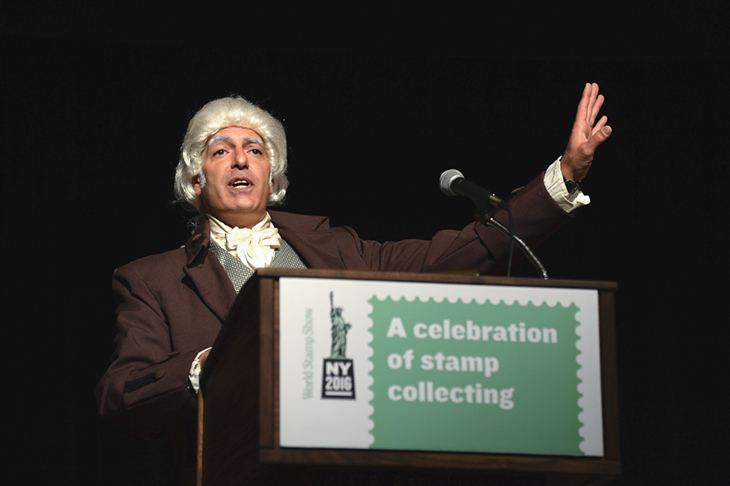 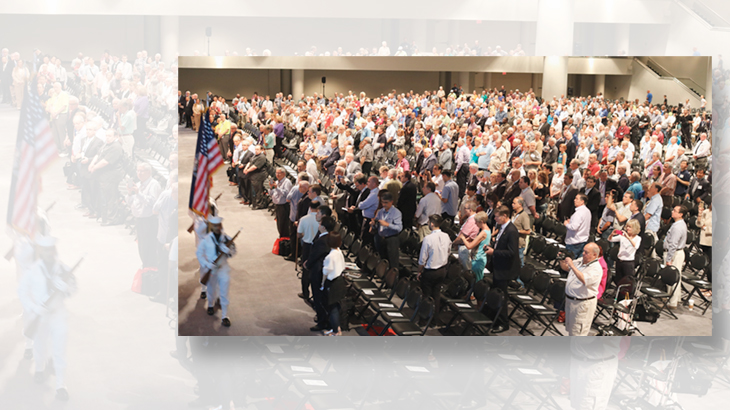 A large, appreciative crowd applauds the U.S. Navy Color Guard that presented the colors during the opening ceremony for World Stamp Show-NY 2016 in New York City.
Previous
Next

The opening ceremony for World Stamp Show-NY 2016 began at 9:15 a.m. on Saturday, May 28, with a patriotic flourish in honor of the 28th Fleet Week New York, the celebration of United States sea services taking place in New York City the same week as the stamp show.

The Special Events Hall at the Javits Center where the show is being held was filled with visitors from all over the world anticipating the opening of this fabulous once-every-10-years show.

Remarks in honor of Fleet Week were made by Vice Admiral Joseph P. Mulloy, and Admiral Thomas B. Fargo, who told the assembled crowd he was a collector: “a shoebox collector,” he said, whose interests included not only stamps, but baseball cards as well. He described having a plate block collection and a collection of first-day covers.

“Collecting has been an immensely enjoyable and satisfying part of my life,” Fargo said.

Fargo is from Hawaii, and he also noted that he’s a friend of Thurston Twigg-Smith, the legendary collector of Hawaii Missionaries and the Persis collection, also known as the Honolulu Advertiser collection.

Wade Saadi, the president of World Stamp Show-NY 2016, was next to take the stage.

“In the many years that I’ve been in the hobby, I’ve never seen so many people come together to make this event what it is today,” Saadi said, commending hundreds of volunteers from all over the United States who put the show together, assembled exhibits, manned the registration booth and took care of all the other necessary details to create a successful show.

He also acknowledged the hard work contributed by volunteers and staff of the American Philatelic Society, the American Stamp Dealers Association, the United States Postal Service, and the contributions of dedicated collectors and 60 philatelic jurors examining more than 700 international exhibits.

His final thanks were reserved for the show’s dedicated vice president, Steven J. Rod, and Saadi’s wife Gail.

“We are delighted to have you join us on this momentous occasion, as 10 years of planning and hard work come to fruition in an eight-day celebration of stamp collecting,” Saadi said in the program for the opening ceremony provided to those in attendance.

“Ever since my first day on the job, I’ve been fascinated with postage stamps,” Cochrane said. He described stamp collecting as a form of expression. “I love the fact that part of my job is to promote stamps, and stamp collecting.”

He described all of the U.S. stamps that will be issued during the show, and spoke passionately about the future of stamps and the stamp hobby.

As Cochrane concluded his talk, American founding father Alexander Hamilton strode out from the wings to address the crowd with stories of his life and accomplishments, and his 1804 duel with Aaron Burr, which did not turn out well for Hamilton.

Hamilton also showed the crowd the $5 definitive stamp honoring him that was issued in 1956 (Scott 1053).

Hamilton’s appearance was followed by a brief video presentation from collector Stuart Weitzman in Spain, who was unable to attend the show. Weitzman is the owner of the famed British Guiana 1¢ Magenta stamp, the rarest and most valuable stamp in the world, which is on display in the World Stamp Show-NY 2016 Court of Honor.

The guests on stage gathered near the podium to conclude the event with a ceremonial ribbon cutting by Saadi, and the enthusiastic crowd headed upstairs to join what promises to be one of the greatest stamp shows in history.

Veterans Day: stamps and covers remind us of service and sacrifices