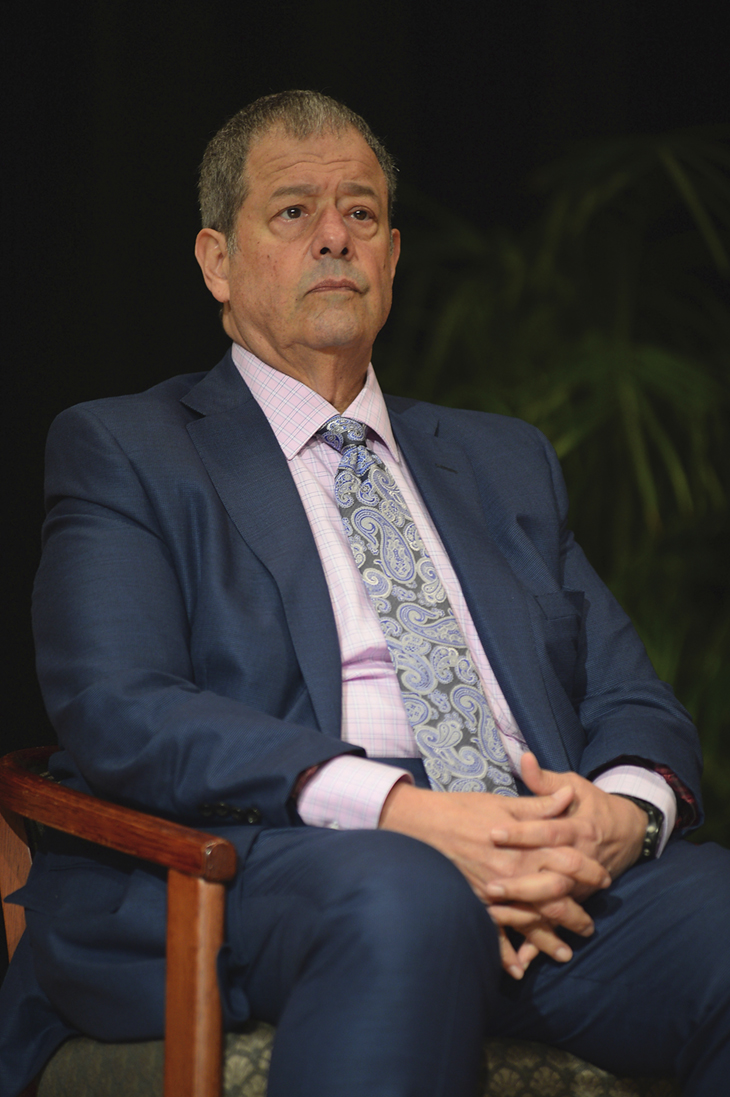 Wade Saadi is president of World Stamp Show-NY 2016. He and a dedicated group of volunteers have labored for more than 10 years to bring the big show to fruition. He is shown here at the May 28 opening ceremony for the show.

Wade Saadi has been a fixture in the stamp hobby for decades, serving in myriad roles. He is a past president of the American Philatelic Society and the U.S. Philatelic Classics Society. I’ve enjoyed Wade’s friendship and support over the years, and he’s always at the ready to answer my questions. He recently provided some insights into how he approaches his current role as president of World Stamp Show-NY 2016.

Q: What factors motivated you to take on the role of president of WSS-NY 2016? Did others compete for the job?

A: I have never thought about this.  In 2005, I noticed an ad in the American Philatelist, soliciting people who would submit a proposal on behalf of their city. So, I called Bob Lamb, then APS executive director, and discussed what was “required” to go forward.

I put an exploratory team together to form a strategy and to formulate and prepare a bid. New York was successful in getting the APS nod as the chosen city. We then formed a 501(c)3 not for profit as New York Philatelic Exhibition, Inc. We would later register a D.B.A. [doing business as] “World Stamp Show-NY 2016”.

Q: You have an outstanding cadre of volunteers on the organizing committee. What traits of leadership have served you best when working with them?

A: Yes, enough cannot be said about the dedication of the members of the organizing committee and their commitments to making this show a huge success. That in itself makes the task of leadership much easier.

Also, having been in leadership roles since my teenage years in Boy Scouts, many of the qualities required of a leader are innate and part of my persona. To quantify which ones I use (or do not use) is difficult. I am not trying to be haughty, but maybe that is part of the self-assurance trait of leadership.

A good leader uses all of her/his skills at all times. Perhaps my listing a few of the traits I believe make a good leader will suffice to answer the question: intuition, confidence, enthusiasm, delegation, inclusion, consensus, compassion, and humility.

Q: There are so many moving parts to a show of this scale that must fit together precisely. Which have been the most challenging for you? The most fun?

A: By far, the most challenging aspect of putting on this show is the lack of experience in putting on a multimillion dollar exhibition in a city where the last such International was held in 1956.

First of all, you have to fashion an organizing committee from scratch, not being able to call the same people that put the show on the year before or two years ago, seeking the most qualified people we were aware of, regardless of geography, as chairs.

Next, all of the relationships must be forged with site managers, decorators, facilitators, media, security, and myriad other vendors. With over 70 nations participating, the 4,500 frames of exhibits, 200+ dealers, five auctions to take place, 70+ postal administrations, 70+ societies, 16 meeting rooms for eight hours a day for eight days, the blending of these into a proper pudding is self-evident.

None are necessarily more daunting than others; you just have to focus and work on one at a time, not being clouded by what is around the corner in 20 minutes.

The pleasure derived from all this is in knowing we are all working together to make this show a success.  As Hannibal Smith would say on The A Team, “I love it when a plan comes together.”

Q: Let’s take off the president’s hat now. What does Wade Saadi, collector and exhibitor, want to accomplish at the show?

A: Unfortunately, I do not believe I will be doing very much during the show, as a collector or exhibitor, outside of my task at hand.

As a gauge of the show’s success, the most important thing to me would be seeing everyone smiling and enjoying themselves. That is my metric for accomplishment.