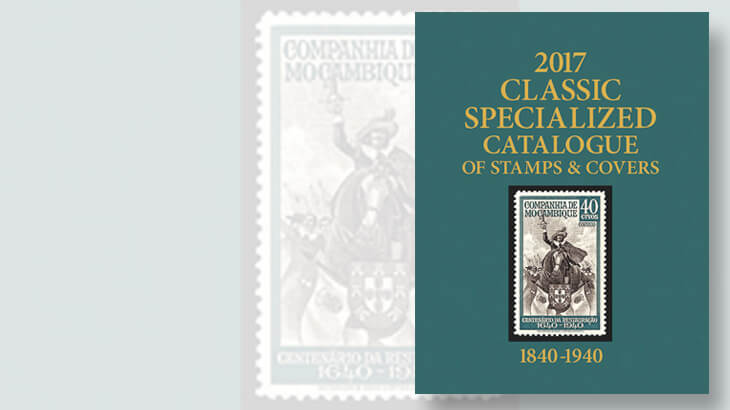 The recently published 2017 Scott Classic Specialized Catalogue of Stamps and Covers 1840-1940 includes many editorial enhancements and thousands of value changes.

Each year special editorial consultant Sergio Sismondo works tirelessly to expand the editorial content and listed values in the Scott Classic Specialized catalog, and this year was no exception. James E. Kloetzel, editor emeritus, and Bill Jones, a former Scott associate editor, also provided substantial input by updating values and making significant editorial enhancements throughout the catalog. Special thanks also goes to our many advisors who offer improvements each year to make this catalog an invaluable reference work for worldwide classic stamps.

A review of the stamps of our neighbor to the north reveals that the marketplace for Canada and Canadian Provinces has been very calm during the past year, and there are few value changes for stamps commonly seen, both unused and used.

This was a good opportunity for the Scott editors to pay special attention to values of covers in early Newfoundland. With the help of expert advisors and cover census numbers, adjustments have been made for cover values from No. 1 through No. 60, as well as in air posts. Most values rise somewhat, but a few that were overvalued previously have been lowered. Newfoundland surcharged stamps also were reviewed extensively, including values and editorial treatment.

There were 68 value changes in Canada semi-official air posts, all increases with some substantial increases. Among the Canada perforated Official stamps, several of the five-hole perfin (perforated initials) varieties increase in value, while many of the four-hole varieties see decreases. In all, 183 values were changed in these Official stamps.

The almost 2,000 Classic-catalog-only value changes in France reflect a continued softening in values. Another 544 value changes were brought over from Vol. 2 of the 2017 Scott Standard catalog.

A softening also is reflected in the almost 120 value changes that occur in Germany for the 1872 sets. Values for stamps with no gum have been added. Values are now provided for multiples for Scott 1-26, including pairs, strips of three, and strips of three or blocks of four.

Values for covers and stamps with no gum have been added for the first time to Guatemala. The 81 value changes for this Central American country show significant increases overall.

Hot off the press: 2017 Scott U.S. Specialized catalog now available: Almost 5,400 value changes have been made in the 2017 edition of the Scott Specialized Catalogue of United States Stamps and Covers.

Almost 300 value changes were made to the stamps of Montenegro. Again, most of the changes reflect increases.

Many increases are among the 235 value changes made to the listings of Serbia. The country’s first issue, the 1-para green on dark violet rose paper (Scott 1), soars from $55 to $72.50.

In 1911, Turkey overprinted stamps issued during 1901-05 for Sultan Mehmed V Rashad’s visit to Macedonia. According to the editor’s note that precedes the listings, the “overprint was applied to 18 denominations in four settings with change of city name, producing individual sets for each city: ‘MONASTIR’ [Scott 165-182], ‘PRISTINA’ [165a-182a] ‘SALONIQUE’ [165b-182b] and ‘USKUB’ [165c-182c].” New values have been assigned for most of the overprints, including similar overprints on newspaper stamps (P69-P81, P69a-P81a, P69b-P81b, and P69c-P81c). Significant increases in value are seen among some of these stamps.

Values for the stamps of the Virgin Islands show an overall softening of the market.

A mix of increases and decreases are found among the 141 value changes in the East African islands of Zanzibar.

An abundance of editorial enhancements

Fans of Newfoundland are urged to examine all of the enhancements to this province’s listings and values. Clarifying notes have been added in many places, as well as single frankings on covers. Of significant importance, the 1919 manuscript “Aerial Atlantic Mail” stamp, previously footnoted, has been given deserved recognition in the 2017 Scott Classic catalog as No. C1a, with values unused, used and on cover. Here, as with many other air posts, explanatory footnotes and other enhancements round out the story of these fabled stamps.

In Canada, shade varieties now are shown for the King Edward VII issue, Nos. 89-95, and other enhancements have been added to many other listings.

Collectors of Switzerland will be pleased to find that many on-cover and never-hinged listings have been added, beginning with the 1907-25 set and continuing through the classic period for regular issues and back-of-the-book issues.

Until 1927, Jordan’s stamps consisted of overprinted issues of Palestine and Hejaz, a region of Saudi Arabia. The basic Palestine stamps used for overprinting were inscribed “EEF” and were perforated gauge 14 or gauge 15 by 14.

New listings have been added for the four types of overprints for the 1905-06 Constitution issue. The “YCTAB” is found in four settings measuring 9¾ millimeters (type I), 11¼mm (type II), 10¼mm (type III), and 8½mm (type IV). The four types are now valued and illustrated. The perforation varieties for Montenegro’s first postage due stamps (Scott J1-J8) also have been broken out into new minor listings.

The 23rd edition of the Scott Classic Specialized catalog brings to a close the 2017 Scott catalog season.