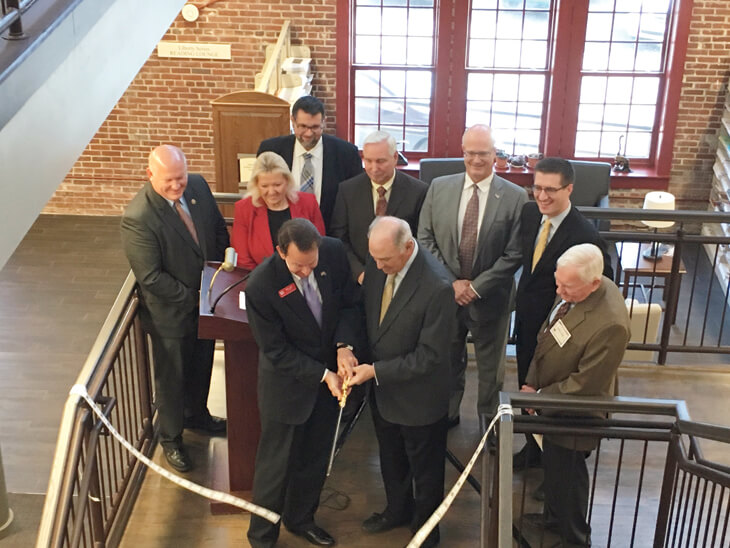 Mick Zais, APS president, at left, and Roger Brody, president of the APRL board of trustees, at right, cut a “ribbon” of stamp labels to officially open the new APRL space. The dignitaries were standing above the approximate location of the AFDCS archives in June 2013, in what was then unimproved storage space. 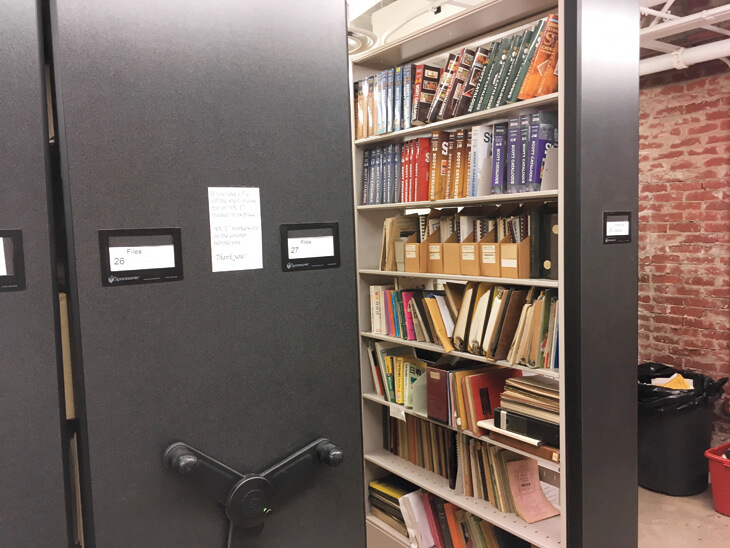 The compact shelving units are moved easily with the turn of a crank handle. Shown is the storage section to the right of the AFDCS archives. 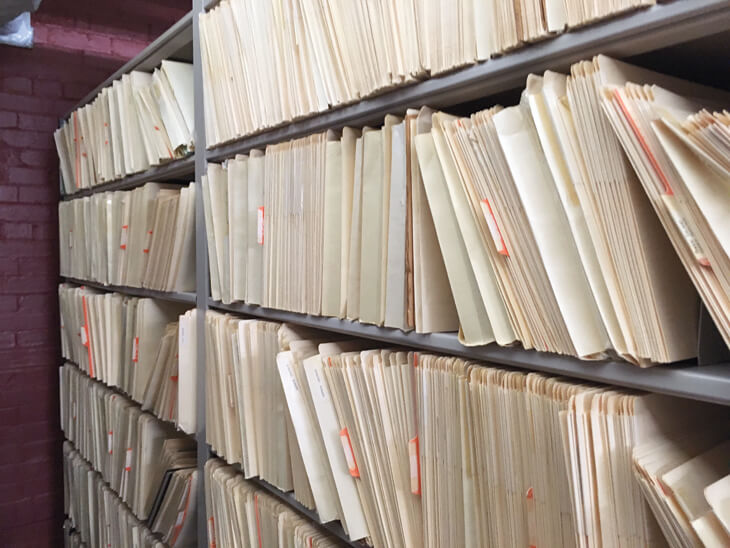 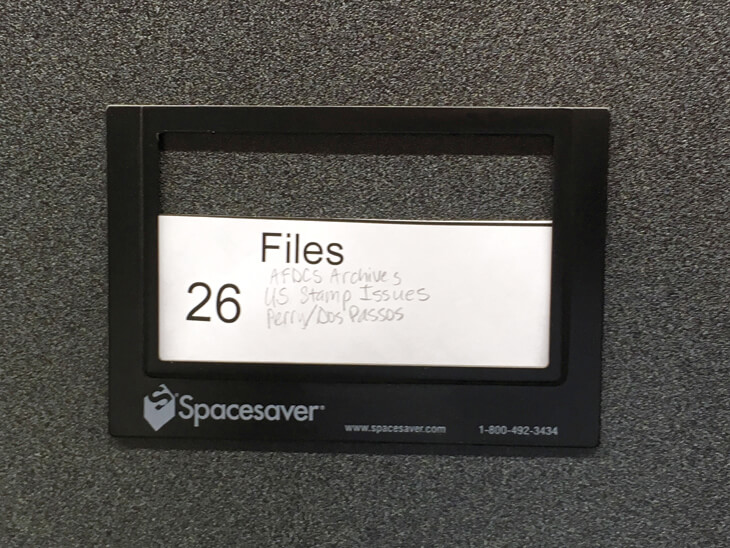 Shelving unit 26 is the location of the AFDCS archives in the new library.
Previous
Next

Besides books, the APRL also has periodicals, documents, maps, and other materials relating to stamp collecting. Books about first-day covers are in the library’s main areas, as are copies of First Days, the official journal of the American First Day Cover Society.

First-day cover collectors who visit the APRL won’t immediately see some of the most specific FDC holdings: the AFDCS archives.

The archives are stored in file folders on movable compact shelving in a semi-public area on the mezzanine level of the new APRL facility.

Though not much to look at on their shelving, in those folders is a wealth of material relating to FDCs, including price lists, advertisements, letters and clippings — the raw materials that might go into researching a book, article, or exhibit.

There are files for specific cachetmakers, but what there aren’t many of in the archive folders are FDCs themselves.

“Though the archives always will accept serviced FDCs, other types of philatelic memorabilia are far more useful,” said Allison Cusick, who has long curated the AFDCS archives as a volunteer.

“Price lists, advertisements, correspondence, unserviced cachets, copies of articles from journals other than First Days — this is just a sample of the items we collect.

“We also are the repository of AFDCS history and welcome identified photos of collectors, dealers and cachetmakers from all eras,” Cusick added.

Contemporary cachetmakers and their work are underrepresented in the archives, and one reason is the Internet, which has resulted in fewer printed price lists and publication advertisements.

Those interested in viewing the AFDCS archives can do so at the APRL by asking one of the library staff for assistance in retrieving the files.

Materials in the archives also may be copied and sent to researchers, per the usual APRL rules and fees.

The AFDCS archives are stored at the APRL for safekeeping. Most small organizations’ archives are kept at the homes of officers, often under less than optimal conditions.

Even before the APRL moved to Bellefonte from its earlier headquarters in State College, Pa., the library was providing a safer, more stable environment for the archives.

When I last saw the AFDCS archives, in June 2013, they were stored in the two buildings that are now the new library premises. However, the so-called Buildings 4 and 5 were only stabilized but not renovated, and therefore not easily accessible to the public.

The area had no furniture and just a dusty concrete floor. The shelves that held the files were located approximately where the finished library’s internal stairway is now, and where the Oct. 29 dedication ceremony took place with a ribbon cutting.

Cusick is a longtime AFDCS member who has served as president and in most of the society’s other positions. He currently is AFDCS historian and a member of the society’s board of directors.

Cusick and the AFDCS are now looking for an assistant or assistants, preferably living in central Pennsylvania, who would be able to visit the APRL and work with the society’s archives on a regular basis. Those interested should contact Cusick by e-mail at awcusick20@gmail.com.