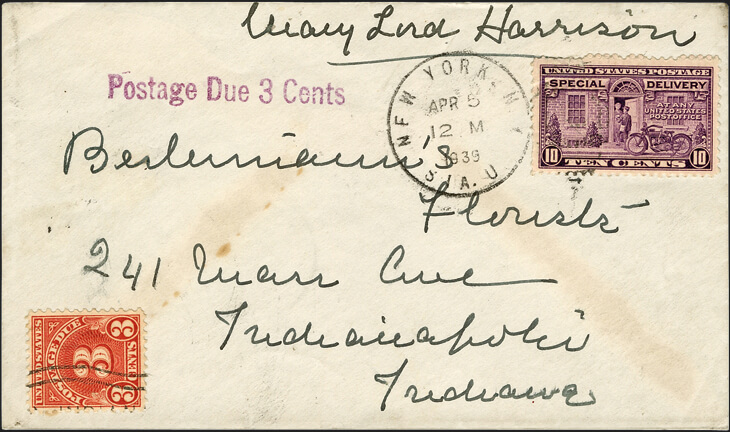 Correctly franked, this 1939 cover was wrongly charged 3¢ postage due. Mary Lord Harrison, widow of former President Benjamin Harrison, was granted the franking privilege eight years after his death in 1901. It excused the first-class rate, but not the sp

Benjamin Harrison was our 23rd president, serving from 1889 to 1893. He was married at the time to Caroline Scott Harrison, but she passed away in 1892.

In 1896, he married Mary Scott Lord Dimmick, the 37-year-old niece and former secretary of his deceased wife. Harrison died in 1901, at the age of 67.

Eight years after his death, the widow Harrison petitioned and was given the franking privilege, which she exercised until her own death in 1948.

The 1939 cover shown nearby was mishandled by the post office because the Mary Lord Harrison signature eliminated the need for the normal 3¢ first-class postage.

However, the first-class postage is all the franking privilege provided for. Any additional service, in this case special delivery, had to be prepaid by a stamp or stamps in the normal manner.

So, it would appear that a postal clerk in New York or in Indianapolis, charged the 3¢ first-class as he had no idea who Mary Lord Harrison might be.