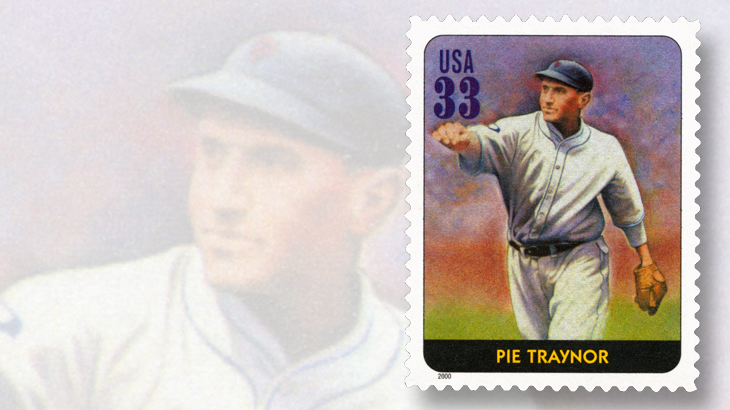 Baseball legend Pie Traynor is featured on a 33¢ stamp issued in 2000.

Baseball hall-of-famer Pie Traynor was born Harold Joseph Traynor on Nov. 11, 1898, in Framingham, Mass. After playing ball as a youngster, Traynor landed a tryout with the Boston Braves, but wound up on the Flamouth, Mass., team in what is now known as the Cape Cod League.

Traynor made his major league debut Sept. 15, 1920, for the Pittsburgh Pirates, and later became the team’s regular third baseman. Though he struggled with his defense early in his career, he developed quickly to become one of the top defensive third baseman of his era.

He stayed with the Pirates throughout his major league career, and managed the team from 1934 to 1939. He was a consistent hitter with a .320 career batting average, and had seven seasons with more than 100 runs batted in. He was named to the National Baseball Hall of Fame in 1948, and his uniform No. 20 was retired by the Pirates in 1972, the year he died.

The liner paper backing the mint stamp has this biographical sketch printed on it:

“Rated as one of the finest third basemen of all time, the Pittsburgh Pirates’ Pie Traynor had a defensive prowess that often overshadowed his strong hitting. His nickname reportedly came from a childhood fondness for pastry.”