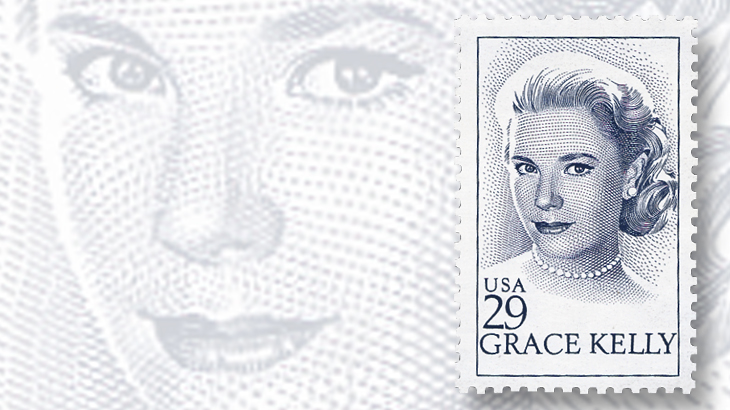 She graduated from high school in 1947, and with hopes of becoming an actress, moved to New York, where she worked as a model while studying acting and landing smaller parts on television and in the theater.

Her earliest films included High Noon (1952) with Gary Cooper, and Mogambo (1953) with Clark Gable and Ava Gardner. For her role in Mogambo, Kelly won a Golden Globe award and was nominated for an Oscar as best supporting actress.

Kelly starred in several other films, earning an Oscar win for best actress in The Country Girl (1954).

Princess Grace died on Sept. 14, 1982, following a tragic single-car accident in which she was the driver, and her daughter Stephanie, who survived, was a passenger.

On March 24, 1993, the United States Postal Service and the Principality of Monaco jointly issued commemorative stamps honoring Princess Grace. The matching stamps were designed and individually engraved by Czeslaw Slania. The 29¢ U.S. commemorative (Scott 2749) was issued in a pane of 50.