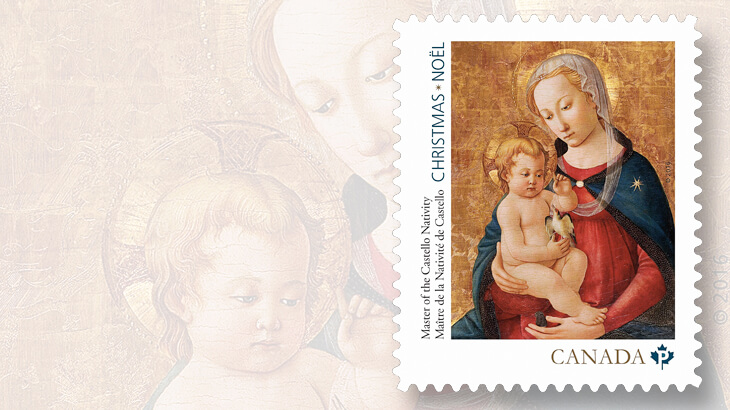 Canada’s nondenominated permanent domestic-rate (85¢) traditional Christmas stamp reproduces Virgin and Child, painted in tempera by a mid-15th century specialist in Nativity scenes known only as “the Master of the Castello Nativity.” 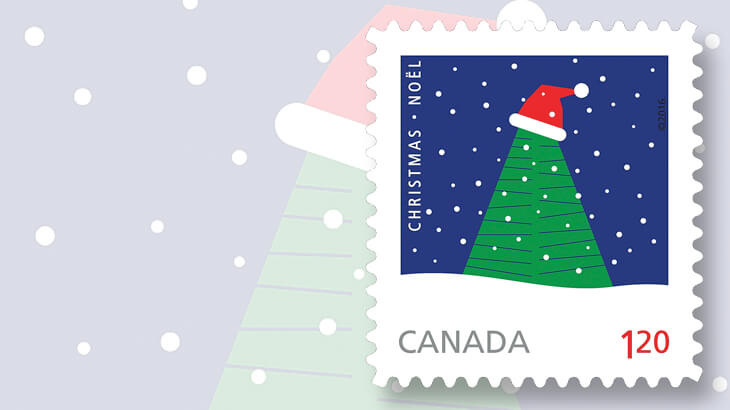 The Canada Post Christmas stamp that pays the $1.20 letter rate to the United States features a Christmas tree with a Santa hat. 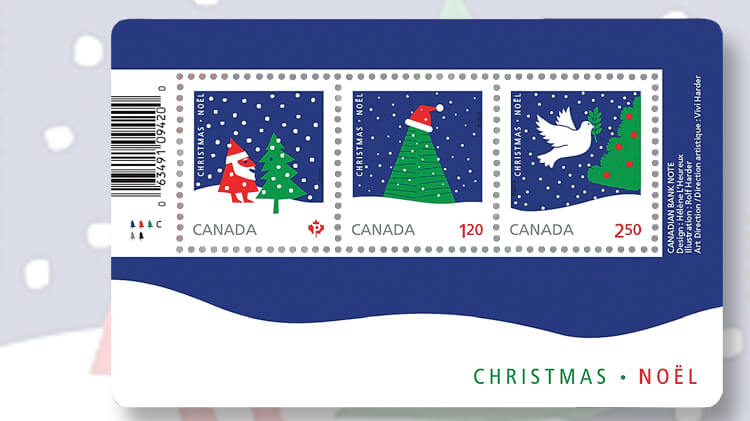 Paying Canada’s domestic letter rate (currently 85¢), the $1.20 letter rate to the United States and the $2.50 letter rate to other international destinations, stamps showing snowscapes with Santa and a Christmas tree, a tree wearing Santa’s hat, and a do 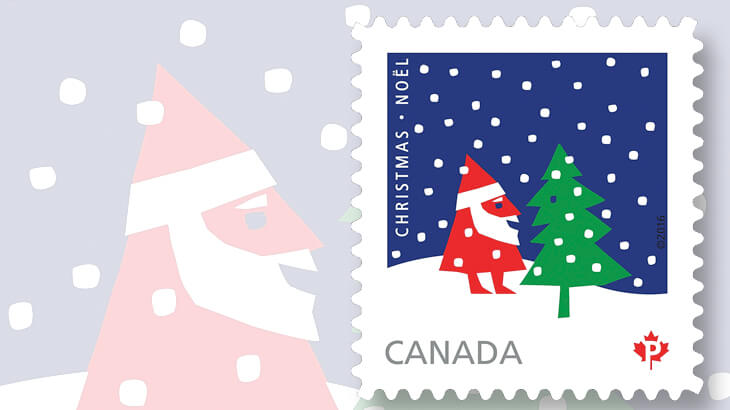 The Master of the Castello traditional Christmas booklet stamp is a “P” permanent-rate die-cut self-adhesive that will indefinitely pay the rate for delivery of a standard domestic letter within Canada (currently 85¢).

The artist was an anonymous minor Italian luminary of the mid-15th century, a specialist in Nativity scenes known only by his association with another of his 30 or so attributed works as “Master of the Castello Nativity.”

In its Details publication for collectors, Canada Post said, “The intensity of the colours in this and other of the master’s works comes from multiple layers of tempera.”

Tempura is a fast-drying mixture of pigment and a water-soluble medium, such as egg.

As noted for last year’s traditional Christmas stamp reproducing the painting The Adoration of the Magi by 16th-century artist Adriaen Isenbrandt, this year’s Virgin and Child is from a major donation made to the Montreal Museum of Fine Arts by Michal and Renata Hornstein. That permanent-rate stamp was issued Nov. 2, 2015 (Scott 2880).

Polish Jews who narrowly survived the Holocaust, the Hornsteins barely escaped with help from sympathetic civilians through occupied Czechoslovakia and Hungary; they married in Rome in 1946.

Encouraged by the Canadian ambassador to Italy they had befriended, the Hornsteins moved in 1951 to Montreal. After a successful career in real estate development, they generously donated 70 Old Master paintings valued at about $75 million to the museum in 2012 to say thank-you to the nation that had become their home.

Virgin and Child by the Master of the Castello Nativity was photographed by Brian Merrett, and the image was made available courtesy of the Montreal Museum of Fine Arts. Like last year’s stamp, it was designed by Louise Methe.

Not unlike the Hornsteins, German-born Harder arrived in Montreal after World War II and worked his way to success, acclaim and prosperity in Canada as an outstanding graphic artist.

According to Canada Post, among his accomplishments he designed more than 60 Canadian stamps, chiefly in the last decades of the 20th century, including a series of blocks of four on prehistoric life in Canada and booklets on famous Canadian forts. Harder died in 2013.

Designed by Helene L’Heureux from original Christmas card illustrations by Harder, the Christmas stamps were developed under the art direction of his daughter, Vivi Harder.

Canada Post described the designs as “simple vignettes set in a winter wonderland inhabited only by Santa Claus, a Christmas tree and a dove with an olive branch, they exemplify the minimalist style and creative joy associated with this renowned Canadian designer.“

The permanent-rate stamp depicts a triangular Santa Claus and a decorated tree. The $1.20 stamp shows Santa’s hat atop an evergreen, and the $2.50 denomination pictures a white dove with an olive branch flying to a Christmas tree. Each scene also includes falling snow.

Canadian Bank Note printed all of the Christmas stamps by lithography: the Madonna and Child stamp using six colors including a special gold ink, and the contemporary designs using five colors.

The new Christmas stamps and related items are available online. Stamps and FDCs are available by mail order from Canada Post Customer Service, Box 90022, 2701 Riverside Drive, Ottawa, ON K1V 1J8 Canada; or by telephone from the United States or Canada at 800-565-4362, and from other countries at 902-863-6550.