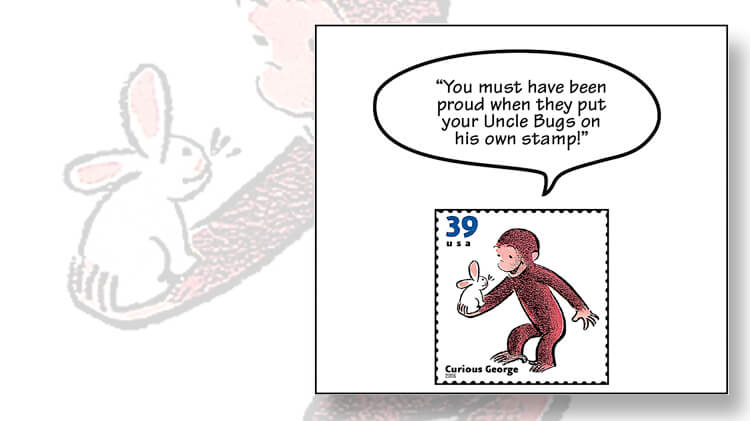 Entries with the theme of magic dominated the October cartoon caption contest featuring the 39¢ Curious George stamp (Scott 3992) issued in 2006, part of a set of eight picturing favorite animals from children’s books.

An example from A.S. Clausi of Riverside, Conn., has George looking at the rabbit and saying, “Did he take you out of his yellow hat?”

Steve Kotler of San Francisco, Calif., views the scene from a different perspective: “For my next trick, watch me pull a yellow hat stamp out of a rabbit!”

The well-known propensity of rabbits to reproduce was noted by many entries. Father Sebastian Glentz of Sheboygan, Wis., has George saying, “Hello Bunny. Want to see my stamp collection? It multiplies as fast as you do.”

Politics got the full treatment as well, using everything from a sledgehammer to a light touch.

This example from Charlotte Shandley of Bronx, N.Y., has a subtle tone: “You dig under. I’ll climb over, and we’ll meet in Tijuana!”

The nonphilatelic line winner also comes from this genre, “Why don’t people seem to like the elephants and donkeys anymore?” It is from Doug Phillips of Sierra Vista, Ariz.

On the philatelic side, the winner comes from David Schwartz of Commack, N.Y., referring to the 32¢ Bugs Bunny issue of 1997.

“I think some bunny likes me,” by Stanley Golabek of Brooklyn, N.Y.

“How would you like to be my vice presidential running mate?” from Ben Malamed of Basking Ridge, N.J.

“Thanks for the offer, hare, but I suggest you ask the tortoise,” sent by Kees Adema, of Fairfield, Conn.

“Harvey! Do you know Jimmy Stewart?” from Charles Smith of Phoenix, Ariz.

“Bunny, you don’t know how much I wish you were a banana!” by Jack Leonard Jr. of Hatboro, Pa.

“The Man in the Yellow Hat said Washington is full of silly bunnies. Are you from Washington?” from Bradley Miller of Huntsville, Ala.