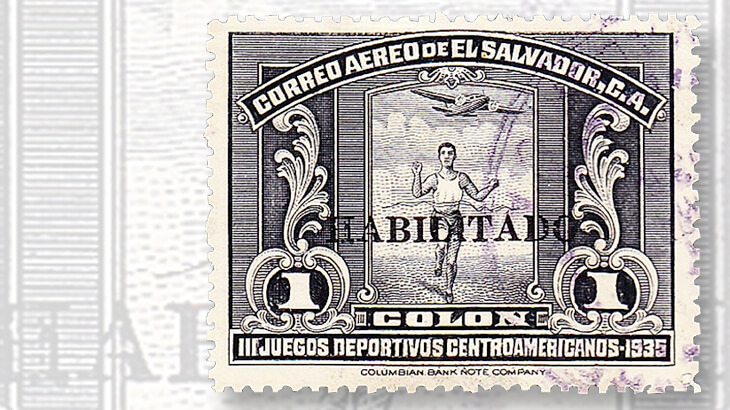 The airmail issues of March 1935 were reissued with “HABILITADO” overprints in June 1935. The common design is a runner crossing the finish line, with an airplane overhead. 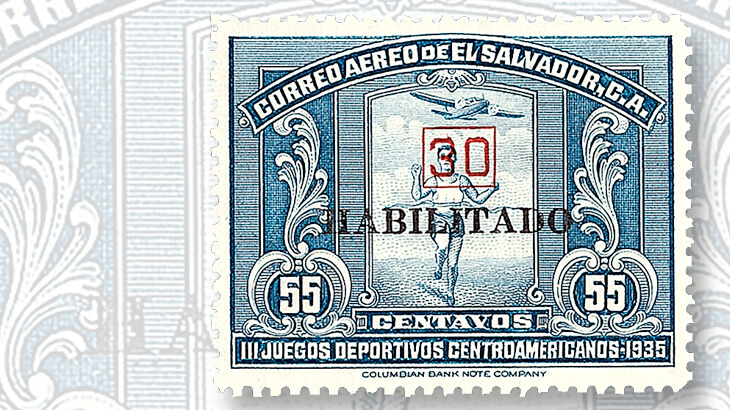 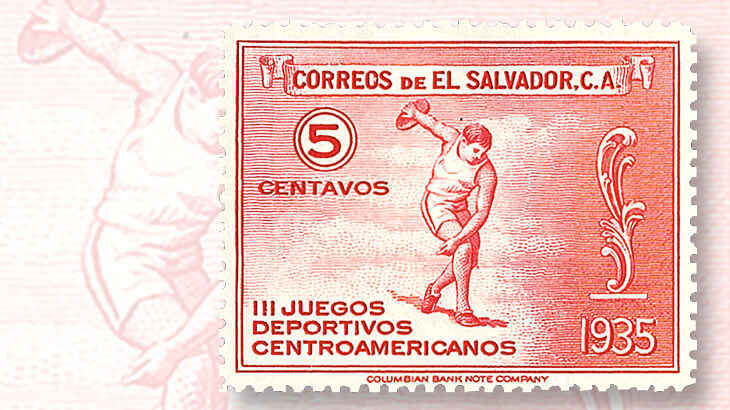 The same image of a discus thrower appears on the five regular issues of El Salvador’s 1935 set for the Third Central American Sports Games.
Previous
Next

I have neglected El Salvador, and I shouldn’t. Over the years, El Salvador has issued a great many stamps in the small quantities appropriate to postal needs.

Airmail stamps before 1940 were more frequently issued in tens of thousands than hundreds of thousands. Overprints abound.

Still, the country is not popular with collectors, so a successful search does not mean a prohibitive price.

Let us consider a set of stamps issued March 16, 1935, the opening day of the Third Central American Sports Games. They were printed by the Columbian Bank Note Co. of Chicago.

The stamps depict athletes in track and field events. The regular stamps portray a discus thrower, while the airmail stamps show a runner breaking the tape at the finish line with an airplane in the clouds overhead.

Mexico and Cuba won most of the medals: 78 and 85, respectively. They were followed by Guatemala with 19, El Salvador with 18, and Puerto Rico with 15. Panama, Nicaragua, and Costa Rica and Honduras brought up the rear.

The only notable variety is in the 1col denomination, with “COIN” substituted for “COLON.” Straight edges are commonly found on both sides and, less frequently, on the bottom of the stamps. There are perforated proofs that seem to read “Columbian Bank Note Company Chicago” and “specimen” in vertical columns.

Three months later, in June, both the regular and the airmail stamps were reissued with the overprint “HABILITADO,” becoming Scott 543-547 and C41-C45. Curiously, none of the denominations would permit a single-stamp franking of an airmail letter to the United States or Europe, the most common destinations, which required 45c postage.

The earlier issue from March might not have been demonetized, because the 1col denomination was used as late as 1954. Of course, this use might have been so long after the fact that postal clerks did not recognize that the stamp was invalid.

The habilitado stamps were printed in substantially greater numbers than the earlier versions: 15c carmine, 39,400; 25c violet, 40,000; 30c brown, 35,800; 55c blue, 6,800; and 1col black, 39,000. Not surprisingly, the smaller-quantity stamps without overprints are somewhat difficult to find on cover; the overprinted ones, not so much, though that does not mean they are easy to locate.

The Asociacion Filatelica Salvadorena (AFISAL) publishes El Salvador Philatelist, an English-language journal with many interesting articles. The society also has a presence on Facebook. The Facebook site illustrates a number of interesting covers and stamps, some with explanations that are not common knowledge.