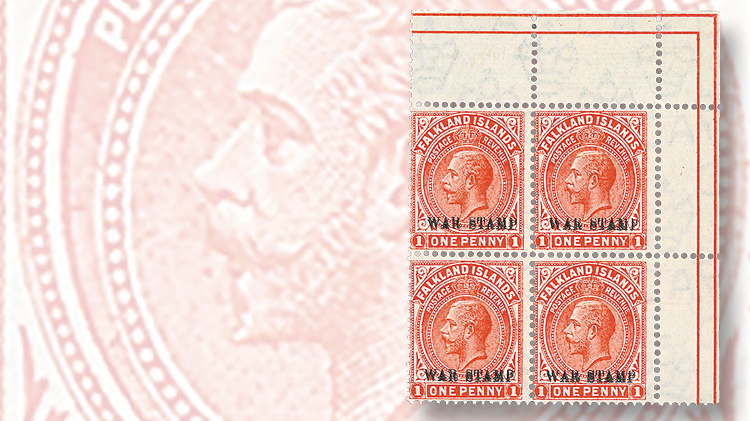 From a unique “war tax” double-overprinted sheet of 1-penny King George V stamps, prepared locally during World War I in the Falkland Islands; the top-right corner margin block of four was sold for $14,800 at the Grosvenor auction on Sept. 22. 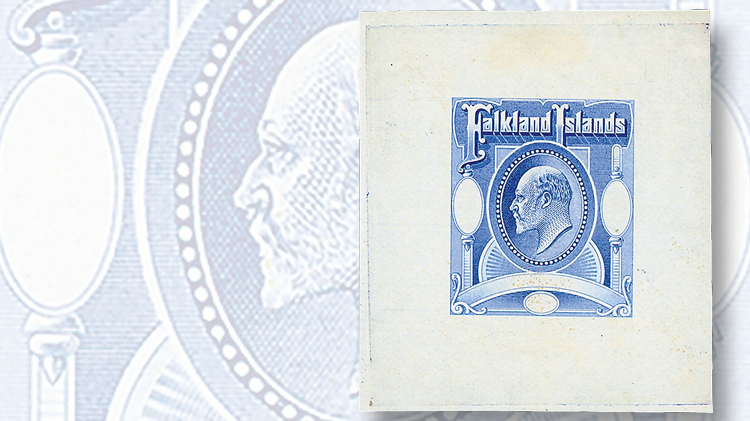 A master die proof of the Falkland Islands’ King Edward VII design for the high denominations, in bright blue, sold for $10,850 at Grosvenor’s September sale in London.
Previous
Next

In London on Sept. 22, Grosvenor Philatelic Auctions sold the Bougainville collection of Falkland Islands, which traced the story of the South Atlantic colony’s philately from its earliest postal history through major rarities of the 1920s and 1930s and its dependencies in the Antarctic region.

An impressive pair of bottom-margin imprint blocks from an early Queen Victoria issue told a poignant tale. New stamps were prepared for the Falklands in May 1891, but the entire print run was lost when the German liner Neko sank on July 21 on its way to the islands.

The stamps were reprinted, albeit in slightly different shades, and the proof sheets, one of each denomination, retained by printers Bradbury Wilkinson, are the only examples that remain of the stamps in their original shades.

Imprint blocks of eight from these archival sheets of the 1891 ½-penny in deep blue green and the 2½d in a sublime shade of very pale, chalky ultramarine were hammered down for £7,000, or about $10,500, including the 22.8 percent buyer’s premium added by Grosvenor to all lots. The issued stamps (Scott 9 and 15) are somewhat less blue and more blue, respectively.

Proofs of stamps made during the production process add a special dimension to any collection, and the Bougainville was no exception. A master die proof of the King Edward VII high denominations in a striking shade of bright blue, with the denomination yet to be added, sold for $10,850. Upon completion, this design was used for the 3-shilling gray green (Scott 28) and 5s dull red (29).

During World War I, British colonies issued postal tax stamps to raise funds for the war effort. These so-called “war stamps” were produced by simply overprinting those words onto existing definitives. To save time and money, this often was done locally.

In the case of the Falklands, current ½d, 1d and 1sh stamps of King George V were pressed into service this way. In error, one sheet of the 1d received a double overprint. The unique top-right corner margin block of four from this sheet crossed the auction block at Grosvenor for $14,800.