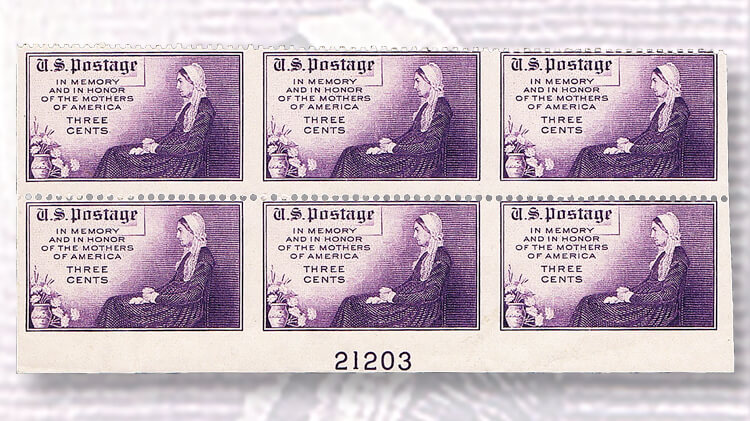 Looking closely at this Mothers of America plate block you will notice that it has horizontal perforations, but no vertical perfs. These perforations have been added to a Farley issue reprint. Image courtesy of Jacques C. Schiff Jr. 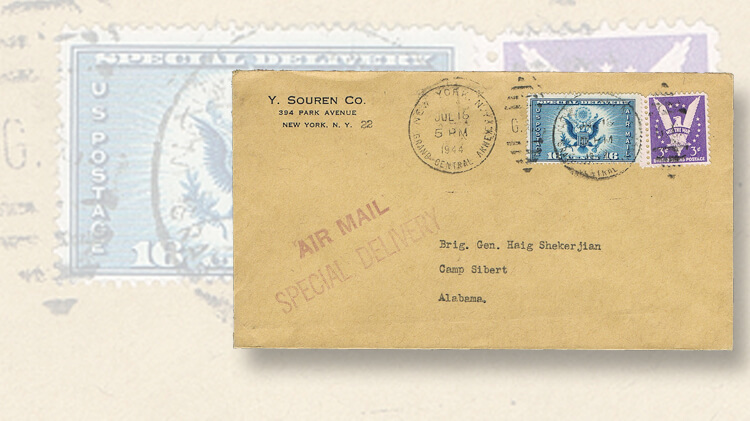 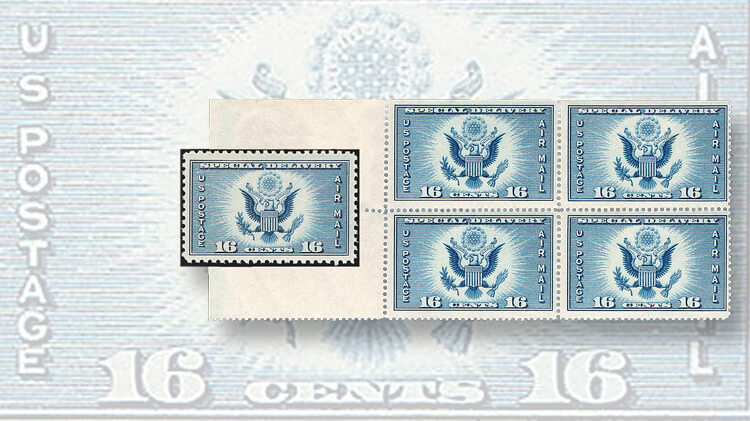 Shown with a normal perforated gauge 11 16¢ airmail special delivery stamp in the margin is this block of perf 15 Farley stamps that were released imperforate.
Previous
Next

Every so often I see perforated versions of the imperforate Farley issues of 1935 (Scott 752-771).

The Farleys are 20 stamps and souvenir sheets released to the public after Postmaster General James A. Farley was “caught” giving limited-edition, mostly imperforate, sheets of commemorative stamps to friends and high government officials.

They resulting outcry from collectors and politicians prompted Farley to make these same stamps available to the public.

The stamps involved were the 10 National Parks Year stamps; the Peace of 1783, Byrd Antarctic, Mothers of America, and Wisconsin Tercentenary stamps; contemporary souvenir sheets; and the 16¢ blue airmail special delivery stamp. All of these were imperforate, except the Peace of 1783 stamps, which are perforated gauge 10½ by 11, just like the normal.

Sometimes owners present perforated versions of these Farley stamps with a question as to what they are, disbelieving that they could be genuine. Others send them in for expertization hoping that they have found an error.

An example of these added perforations is shown nearby, courtesy of Jacques C. Schiff Jr. Horizontal perforations, but not vertical, have been added to these 3¢ Mothers of America commemoratives. The perforations are gauge 11.7, mimicking the genuine 11.2 perforations of the normal issue.

The vast majority of Farleys have remained imperf as issued. But from the time of issue until today, some collectors and dealers have felt the need to add perforations — either to facilitate use, or to create what they thought might be salable varieties.

How to tell when perforations have been added? As with the illustrated Mothers of America block, the Farley reprints were released without gum, and the perforations added seldom match the genuine perforations of the era exactly.

For the souvenir sheets, which were never issued with perforations, the presence of perfs is enough to identify them as Farleys.

More often than not, the added perforations are the wrong gauge. Another example is the airmail special delivery stamp, perforated gauge 15. If perforated versions are unusual, they are extremely difficult to find on cover.

One such example is pictured nearby, courtesy of Hideo Yokota. It proves the origin of the block of the airmail special delivery stamps, because the 1944 cover is from New York City stamp dealer Y. Souren.

Three such covers are known, all from Souren to customers. It would appear that he added the perforations, and gum, too, to make the stamps more user friendly.