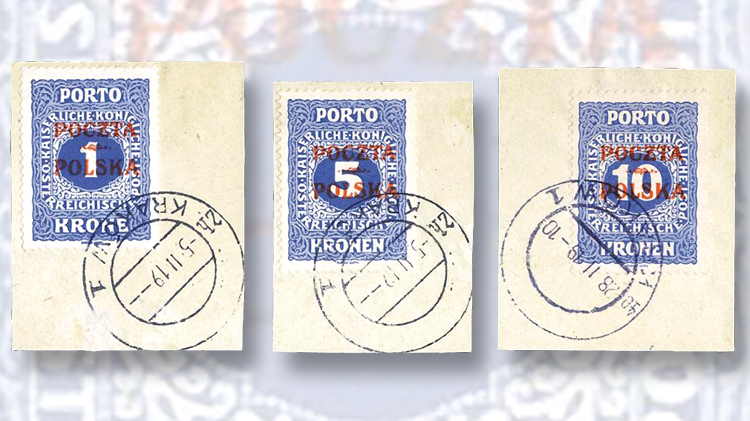 Three scarce high-denomination Austrian postage due stamps overprinted in Krakow, Poland, after World War I sold for $17,825 at Cherrystone’s sale in September.

As it does every fall, the international auction scene shifted into high gear during September and October, with notable sales happening every few days somewhere in the world.

France utilized a single stamp design for all its colonial issues from 1892 until the early 1900s. Known as the Navigation and Commerce or Group Type issue, the design featured a pair of allegorical figures seated over a shield containing the figure of denomination, with an oblong tablet at the base of the design on which the name of the colony was printed in a separate color.

A pair of 75-centime Navigation and Commerce stamps from French Indochina (modern-day Vietnam, Laos and Cambodia) shows an interesting error on the right-hand stamp: the country name is inverted, albeit still within the tablet where it belongs (Scott 19a). This is the only denomination in the set of 19 on which such an error occurs. Unused with a hinge remnant, the pair brought $6,613, including the 15 percent buyer’s premium charged by Cherrystone on all lots.

From 1795 to 1914, Poland was partitioned among Austria, Russia and Prussia. With the exception of a solitary stamp issued under Russian dominion in 1860, Poland had no stamps of its own until the end of World War I, at which time the Allies backed its re-emergence as an independent nation. The nascent government authorized post offices in various cities to overprint whatever stamps they had on hand with the words “Poczta Polska” (Polish Post).

Issues prepared in Krakow consist of this inscription on two lines with a typographic dingbat between, applied to the then-current batch of Austrian stamps. Regular issues, newspaper and postage due stamps all received the overprint, though some of the resulting overprints are very scarce.

Cherrystone offered the three high-denomination postage due stamps from this so-called Krakow issue: 1-krone, 5k and 10k (Scott J8-J10). Each stamp is tied to a similar piece of paper, indicating the Krakow postmarks were probably applied as a favor to a collector.

Nonetheless, the sought-after trio — only 80 examples each of the 1k and 5k were made, and just 40 of the 10k — went for $17,825. The three are all signed by experts and accompanied by certificates, a necessity for a frequently forged issue such as this one.