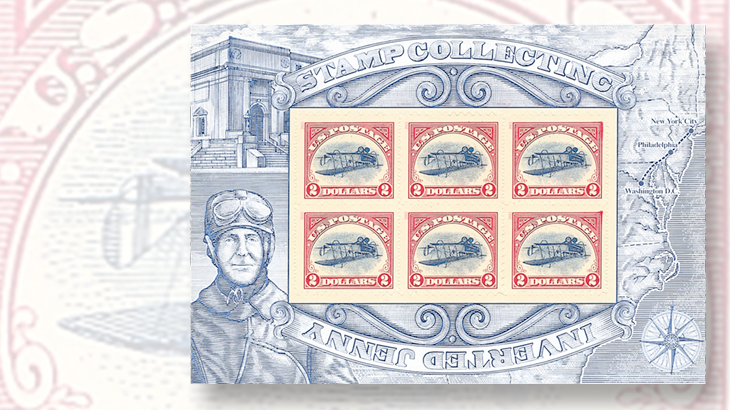 The pane of six $2 Jenny Invert stamps, originally issued in 2013, has been taken off sale at USPS Stamp Fulfillment Services, but is still available at many post offices.

The United States Postal Service is no longer selling the 2013 $2 Inverted Jenny pane of six stamps through its Stamp Fulfillment Services retail division.

USPS spokesman Mark Saunders told Linn’s Stamp News that the Inverted Jenny panes are still being sold at post offices nationwide, and that more than half a million panes are still available from those retail locations. The full print run of this issue was 2.2 million panes.

Saunders explained that the stamps were taken off sale at the Stamp Fulfillment Services facility in Kansas City, Mo., because the warehouse inventory of the $2 stamps had been depleted.

The $2 Inverted Jenny stamp pane (Scott 4806) was issued Sept. 22, 2013, as a commemoration of the 1918 24¢ Jenny Invert airmail stamp error (C3a) that shows the blue Curtiss “Jenny” airplane flying upside down within the red stamp frame. The normal 1918 airmail stamp (C3) has the airplane flying right side up.

As a promotional scheme, the Postal Service intentionally created 100 panes of an upright variety of the 2013 $2 Jenny Invert stamp. Like the millions of normal $2 stamps that show the plane flying upside down, these rare variety panes, which show the plane flying upright, are hidden within sealed blind packaging which, from the outside, cannot be distinguished from the regular issue.

The variety panes were then mixed in with the normal stamps. Stamp customers who come upon the variety in their purchases have found they can make a substantial profit selling the pane at auction or to a stamp dealer or collector. Some of the scarce variety panes have sold for $50,000 or more.

The 100 upright variety panes were also packaged with a card printed with a phone number the finder could call to receive a certificate signed by the U.S. postmaster general to register the purchase and discovery.

At least 30 of the 100 variety panes have been found and reported to the Postal Service. Linn’s has requested updated information from the USPS to determine the total number of panes reported by finders to date.