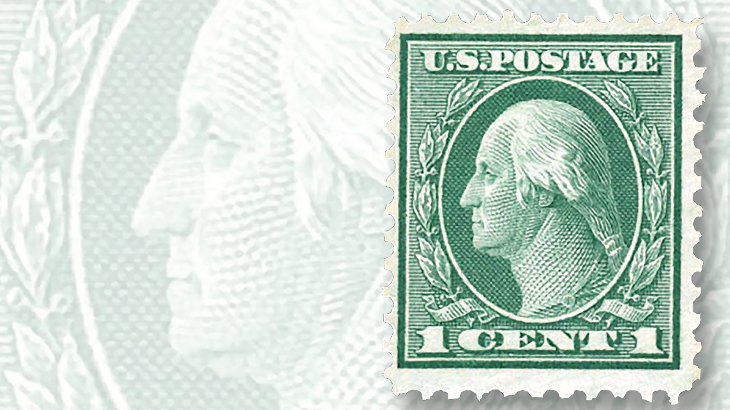 Some salvaged waste rotary-printed U.S. stamps of the early 1920s are quite scarce. One of fewer than 20 known, an unused coil waste Washington-Franklin 1¢ rotary-press perf 11 stamp brought $41,300 in Daniel F. Kelleher’s September auction.

The firm of Daniel F. Kelleher held a sale of U.S. and worldwide stamps and postal history on Sept. 27-29 at its headquarters in Danbury, Conn.

The top bid among the U.S. items was a perfectly ordinary looking 1¢ stamp from the Washington-Franklin series. However, its precise dimensions and perforations reveal it to be something other than ordinary.

In the 1910s, in order to print stamps more efficiently, the Bureau of Engraving and Printing switched from flat plate to rotary presses, allowing stamps to be printed in continuous rolls. The printing plates for the rotary press were curved around a large cylinder, resulting in a printed image that was slightly stretched either horizontally or vertically, depending on which way the plates were oriented. This means that rotary-press stamps are about half a millimeter taller or wider than similar flat-plate stamps.

As part of an effort to economize, in the early 1920s the BEP salvaged otherwise wasted parts of rotary-printed stamp sheets and converted them into usable sheets for issuing to the public. These printings are known as either sheet waste or coil waste, depending on their original intended purpose.

What distinguishes the salvaged waste from other rotary press stamps printed at the time is their perforations: instead of coil-type perfs in one direction only, the waste stamps were perforated all around, either gauge 11 (like earlier flat-plate printings) or 11 by 10, or 10 by 11.

Many of these salvaged waste stamps are very scarce. In the case of the 1¢ green Washington-Franklin rotary-press perf 11 (Scott 544), fewer than 20 are known to have survived unused, making this one of the rarest of U.S. 20th-century stamps.

The example in the Kelleher sale, with never-hinged gum and fine-to-very-fine centering, is one of the nicest examples known. It sold for $41,300, including the 18 percent buyer’s premium charged by Kelleher on all lots.