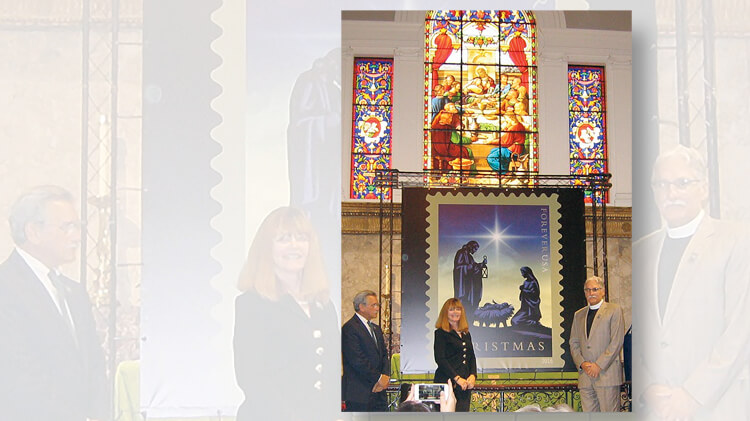 To issue its Nativity Christmas stamp of 2016, the United States Postal Service returned to the historic St. John’s Church, across Lafayette Square from the White House, in Washington, D.C.

And with the help of some of the same people who presided over the 2014 release of a similar forever stamp in what a former postal official described as a three-stamp “Holy Family Series,” the Postal Service launched its final holiday stamp in a Nov. 3 ceremony that could have passed for a worship service.

The noontime event drew about 200 people to the “church of the presidents” for what Louis Giuliano, former chairman of the Postal Service’s board of governors, said was “one of the most inspiring and uplifting stamp ceremonies I have attended.”

Giuliano, who spoke at the 2014 Christmas Magi stamp release at the church, said the three stamps “spoke deeply to my Christian faith,” a theme that echoed throughout the program.

Janice Walker, vice president for corporate communications at the USPS, noted that the Postal Service had been issuing stamps depicting Jesus Christ since 1966, when it issued its first Madonna and Child stamp.

But this year’s Nativity stamp clearly uses “one of the most symbolic images in the world” to mark the birth of Jesus, she said.

The bright star shining over the image of Joseph and Mary and their infant “stands out in both its illustration and its meaning of Christmas,” Walker said.

St. John’s Rector Dr. Luis Leon, who was at the 2014 dedication, said that it was “the star” in the new stamp that also caught his eye.

That star shows dramatically that the stamp is honoring “God’s gift for the people of God,” he said.

Although the ceremony was filled with reminders of the 2014 stamp dedication, there were other signs of how the USPS has changed its first-day program since that ceremony.

Outside the church, near the USPS stamp sales tent, was a “selfie” frame where individuals could take their photos standing in front of an image of the new stamp, as did Giuliano before the event.

And there was a postal camera crew dashing about the event, interviewing the speakers and sending live images of the ceremony to a Facebook audience, something the USPS didn’t do two years ago.

In the church vestibule, there also was something absent two years ago: a Postal Service warning that anyone entering the church could be videotaped by the USPS.

Giuliano, however, was true to form, urging those at the ceremony to buy and use them year-round, as he said in 2014.

“There is no law that says you can only use these stamps now,” he said.

He also noted that the three “Holy Family” stamps were not a product of “a grand strategy,” and that some would have argued that the latest stamp depicting Christ’s birth should have been the first issued.

The first stamp, issued in 2012, depicted the flight of Joseph and Mary to Egypt, an event that followed the birth of Christ, and the arrival of the three kings on the 2014 stamp also followed his birth.

Whatever the order, USPS Stamp Services spokesman Mark Saunders said the Postal Service printed 400 million of the 2106 Nativity stamp, hoping it will be one of the most popular stamps on holiday mailings.