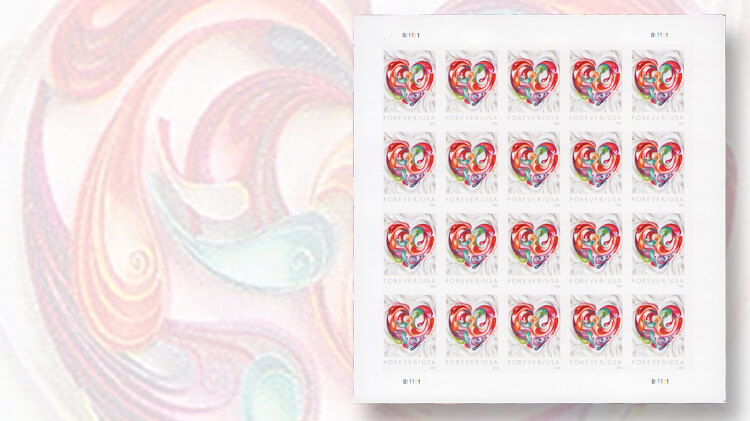 A complete pane of 20 of the recently discovered imperforate error on the 2016 Quilled Paper Heart forever stamp. The error was discovered in a small post office in Pennsylvania.

An imperforate error of the United States Quilled Paper Heart forever stamp was discovered in mid-October by a collector at a small Pennsylvania post office, the first major error reported on a 2016 U.S. stamp issue.

Error panes from the find are completely missing all die-cutting on the face of the stamps, but have normal rouletting on the reverse, which allows easy removal of stamps from a pane — a separate process.

According to the collector who discovered the errors, several complete imperforate panes were found in a pad of normally processed stamps, along with one pane showing a transition from partially die-cut to imperforate.

Of these, several of the panes exhibit creasing or other handling damage, and some loose scrap was recovered as well. The plate diagram on the reverse side of the panes indicates the stamps were all from the lower-right position from press sheets of 10 panes.

Ironically, the new error occurs on a stamp that was also issued in an intentionally imperforate format (in press sheets).

The Quilled Paper Heart Love stamp (Scott 5036) was issued Jan. 12 in both die-cut and imperforate press sheet formats, which under normal circumstances would have rendered any true errors, such as the newly discovered one, irrelevant because, in theory, they cannot be distinguished from the intentionally released version. The intentionally imperforate variety was assigned Scott 5036a.

However, because of a corporate production change by the printer, the errors in this case are easily identified and verified. When the Quilled Paper Heart stamps were first issued, all bore sleeve (plate) number S11111 in all four corners of panes of 20, the “S” indicating the printer was Sennett Security Products. The error stamps bear number “B11111.”

For internal printer identification purposes, a change was officially made from Sennett Security Products to Banknote Corporation of America on Oct. 1, 2015. BCA, as a corporation, was acquired by Sennett in 2004 and has operated under the Sennett umbrella since.

To designate this internal change, all stamps produced by the firm since Oct. 1, 2015, bear the prefix “B” rather than “S.” It is not yet known how many different stamp issues will have two different numbers as a result of this change.

According to the United States Postal Service, the first delivery order for the Quilled Paper Heart stamp was during August 2015, for a scheduled Jan. 12, 2016, issue date, thus falling under the Sennett designation (S11111).

However, there was a second delivery order made for the stamps in May 2016. Because the name change occurred between orders, new printing sleeves were prepared with sleeve number B11111 to denote the BCA production.

“At the time,” USPS spokesman Mark Saunders told Linn’s, “it was decided there would be no new first day of issue since it was a printer name change.”

Indeed, the stamps themselves are indistinguishable from each other. Both were essentially produced by the same company on the same printing presses and processing equipment, share common processing traits, and were produced on the same type of paper. Even the large block of phosphorescent tagging covering all stamps is the same size (just over 4½ inches by 4¾ inches).

Saunders specifically confirmed to Linn’s on Oct. 28 that no press sheets of any kind (die-cut or imperforate) were produced for the BCA (B plate-number prefix) version of the stamps.

As a result, any imperforates found with the B11111 plate number are readily identified as production errors rather than the intentionally created imperforates.

However, because the plate number is the only distinguishable feature, imperforate errors must be collected in plate multiples of four or six, half panes of 10, or full panes of 20.

The specific quantity found is unknown, although it is assumed to be a small number so far. Because all were from the same plate position, it is possible others may turn up in different locations where panes from other positions may have been distributed.