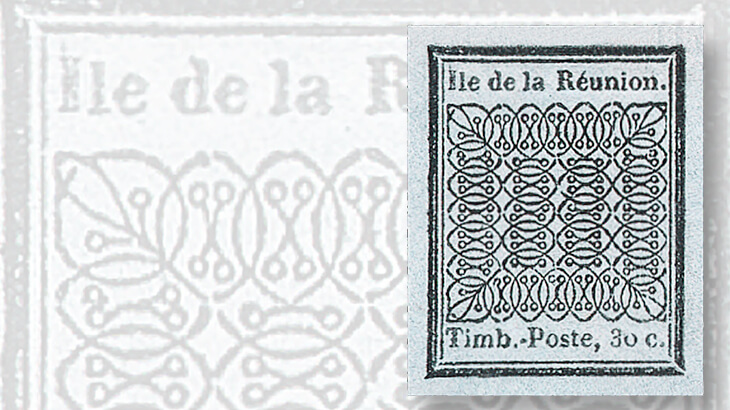 Reunion Island’s second stamp, issued with the first stamp in January 1852, also was designed using type ornaments and then typographed. 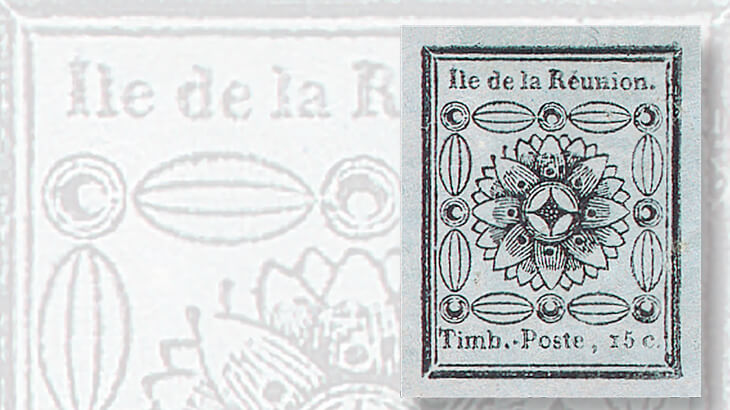 The first issue of Reunion Island, from 1852, was produced by a local printer in St. Denis, the capital, using type ornaments and letters to form the design.
Previous
Next

Two postal directives from Paris reached the officials of St. Denis, capital of the French colony of Ile de la Reunion, in the summer of 1851. The dispatches were not well-received.

This volcanic island in the Indian Ocean, while admittedly remote (110 miles southwest of Mauritius and 420 miles east of Madagascar), was prosperous because of thriving trade in sugarcane and spices, and boasted a population of more than 121,000. The island was fairly sophisticated, with some fine buildings, especially in St. Denis, and at least eight newspapers.

The island was uninhabited until the French landed in 1638, and initially was known as Mascarin. In 1649, it was officially claimed by France and named after the ruling dynasty, becoming Ile de Bourbon.

Twenty members of the French East India Co. arrived in 1665, and over the next hundred years the population grew, including many slaves imported to tend the commercial crops.

Before 1853, France had few specific laws dealing with internal posts of its colonies, and several of the older colonies — Guadeloupe, Martinique, and Bourbon — had organized their own letter posts by the second half of the 18th century. Bourbon’s first official internal post began in 1784.

The elected national convention in Paris abolished the monarchy on Sept. 21, 1792, and in March 1793, Ile de Bourbon became Ile de la Reunion, a name reflecting what Maurice Jamet (150 Ans d’Histoire Postale des Anciennes Colonies Francaises, 1980) called “a sense of union of wills and a name to remind us of our victories and revolution” [translation].

In 1806, the island became Ile de Bonaparte, after the first French emperor (as of 1804). The British captured the island but kept the name in 1810, but reverting to France in 1815 after the Congress of Vienna, the island became Bourbon once more. Finally, in 1848, it became, and still is, Ile de la Reunion — Reunion Island: a French department in 1946, and an overseas department and one of France’s 18 regions in 1974.

Returning to the summer of 1851 on Reunion: France had issued its first stamps in January 1849, and their success led authorities to consider sending stamps for use in the colonies. The official dispatches of June 13 and Aug. 14, 1851, said that certain denominations of the 1849 Ceres stamps — the 10-centime, 25c and 1-franc denominations — would be sent to Reunion. (Four other colonies eventually received stamps as well.)

The dispatches also listed all the postal rates in effect for mailing from the island to France and its settlements, including “the special and local rates” (not specified) that would have to be prepaid for letters to reach the port of mailing (St. Denis) on Reunion. The implication was, however, that the French stamps to be supplied could be used for all mailing purposes.

The problem was that local rates on Reunion were 15 centimes for a letter mailed within a city, and 30c for a letter sent between two post offices within the island, and no French stamps in those denominations were to be sent. Thus, there would be no stamps of the correct denominations to prepay letters to get them to St. Denis, from which they would then be sent overseas.

The website of the Philatelic Circle of Bourges, in central France, describes the Reunion governor (possibly an apocryphal anecdote, but humorous nonetheless) as reading the dispatches and then saying, “A Paris, decidemment, ils ne comprennent rien” (translation: “In Paris, decidedly, they understand nothing”).

And, so, the Reunion officials decided to print the stamps they needed for their own purposes, no matter what Paris chose to send. A decree dated Dec. 10, 1851, signed in St. Denis by the island’s governor, Louis Doret, and the director of the interior, Edouard Manes, listed all the postal rates both for mail leaving Reunion and for internal postal fees, and stated that, “There will be 10c, 25c, and 1fr stamps for the letters for France and foreign countries, and 15c and 30c stamps for the interior service of the colony.”

This decree did not note that the 10c, 25c and 1fr stamps were existing French issues, and that the 15c and 30c issues were being printed on the island.

The “official government printer” in St. Denis, Gabriel La Huppe (there is still a street in St. Denis named after him), was charged with both designing and producing the new stamps, with a different design for each of the two denominations.

Scott’s Monthly Journal of May 1925 quoted prolific philatelic author Fred Melville on the birth of the Reunion stamps, saying that La Huppe “made up the designs from type ornaments and letters, and apparently set each denomination four times, as four variations are found of each value.”

The stamps were printed by typography in black ink on thin, blue pelure paper, unwatermarked and not perforated. The stamps also were ungummed, a factor that Melville blamed for the stamps’ unpopularity with the public, who sometimes added glue or used pins to affix the stamps. Use of the stamps was optional, with payment noted in manuscript markings by postal clerks on the letters.

Melville said that the St. Denis postmaster allegedly stated that he did not sell more than eight francs’ worth of the stamps in the years of their validity, Jan. 1, 1852, to Dec. 31, 1859, after which they were replaced by the first general issue of the French colonies.

That figure is difficult to believe, but on the subject of scarcity, Melville also mentioned that “an old-time philatelist of Bordeaux who thought himself in clover when he unearthed a mass of 2,000 letters of the period all originating in Reunion, found only six copies of the island’s stamps amongst the lot.”

How many examples were printed of the first issues of Reunion? The number often quoted in catalogs and articles is 7,500 of each denomination, and Melville stated in the 1925 Scott’s Monthly Journal article that 14,960 were destroyed in 1860, without giving his source for this figure. Because this would leave only 40 stamps ever extant, 15,000 becomes unbelievable.

A document discovered in recent years in the archives of St. Denis, described in a monograph by its finders, Jean Francois Brun and Benedict Chandanson, published in December 2008 (Les Deux Premiers Timbres-Poste de l’Ile de la Reunion) sheds light on both the question of quantities of Reunion Scott 1 and 2 and their ungummed state.

The handwritten document, dated Feb. 16, 1852, at 8 a.m., in St. Denis, states [translation] that the signatories — Planta, director of letter mail in Reunion; Gardillane, curator of mortgages; Morin, representative of the controller; and La Huppe, government printer — “have examined in accordance with the orders of the director of the interior, on receipt of the stamps, the issue of which was ordered by decree of 31 December 1851 and whose surrender to the director of the office could not take place due to damage incurred during the application of a coating used to stick them on letters.”

The “accepted” and the “destroyed” numbers add up to 8,000, but at least some of the new stamps had been on sale for more than month. Had some ungummed examples been put on sale, and then La Huppe tried to apply gum to some of the rest, with disastrous results?

I do not have a copy of the Brun-Chandanson monograph, to see what the authors have to say about any ungummed stamps that had been placed on sale Jan. 1, 1852. The use of the figure 7,500 of each denomination in various sources continues to be inexplicable.

No matter what their original quantities, Reunion Scott 1 and 2 are mighty scarce today.

Melville’s 1925 article discussed the examples offered in the April 1925 auction of material from the holdings of the truly legendary collector, Count Philippe la Renotiere von Ferrary (1850-1917). The French government had seized the enormous collection as war reparations and auctioned it in 14 sales between 1921 and 1926.

Melville exclaimed that Ferrary had owned six examples of the 15c and four of the 30c: “ten stamps with a total philatelic value of at least $9,000!” That sum wouldn’t buy half of a single example of Reunion Scott 1 or 2 these days.

The two stamps were reprinted using the surviving plates (some had rusted away) in 1866 in Brussels, with three types of each denomination instead of the original four, on paper of a lighter blue than the original.