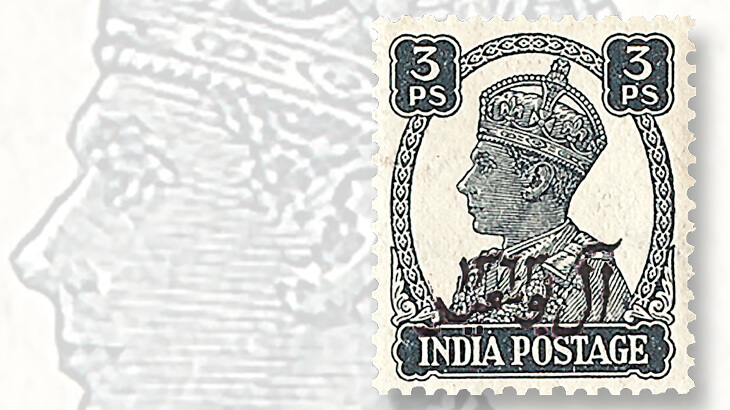 The 1944 Muscat and Oman Arabic script overprinted Indian King George VI postage stamps (Scott 1-15) are undervalued in the 2016 Scott Standard Postage Stamp Catalogue and are a good buy in mint never-hinged condition at around $75.

Muscat and Oman was a sultanate located on the southeastern end of the Arabian Peninsula with coasts on the Gulf of Oman and the Arabian Sea.

It dominated trading, especially the slave trade, in the Indian Ocean up to the 19th century. In the 19th century, it became increasingly reliant on its alliance with Great Britain and on British military assistance, although it never became a British colony.

In 1970, the name of the country was changed to the Sultanate of Oman, but Muscat remained its capital city. It is an absolute monarchy ruled by Sultan Qaboos bin Said al-Said.

On Nov. 20, 1944, 15 King George VI stamps of British India were overprinted in Arabic script for use in post offices operated by the government of India in Muscat and Oman (Scott 1-15).

The set of 15 stamps is valued in used condition at $143 with the value in italics. However, this value only applies to stamps with identifiable Indian administration postmarks rather than later British administration cancels. Don’t buy used examples if you can’t tell the difference, or if they have not been expertized.