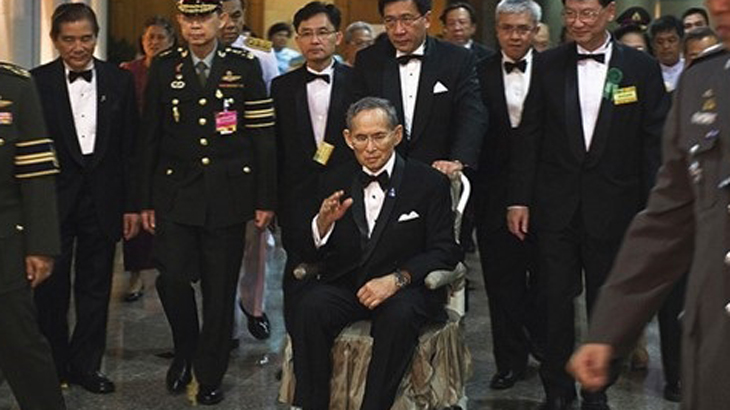 Thailand's late King Bhumibol Adulyadej, who died in October, is being honored on 9,999,999 postcards that Thailand Post is giving away. (Image courtesy of Wikimedia Commons user 2T)

As Thailand mourns the loss of a beloved leader, the country’s post office is offering a free postcard with a stamp depicting King Bhumibol Adulyadej, the long-reigning monarch who died Oct. 13 at the age of 88.

Pattaya Mail is reporting that these postcards —  9,999,999 were made available — are meant to remind citizens of the unity that the country possesses, as well as to commemorate the King’s commitment to his people during his 70 years on the throne. He took the throne in 1946.

Each postcard is packaged in a gold envelope.

“The postcards, which are the size of A5 paper, have a large picture of the King printed on the left while a one-baht postage stamp with the same picture of His Majesty is placed on the ride side,” Pattaya Mail’s report reads.

Along with the photo depicting the King, a poem written by Thailand Post is included.

Who was King Bhumibol Adulyadej?

King Bhumibol was one of the longest reigning Monarchs in the modern world, according to CNN's obituary.

Assuming the throne in 1946, his reign started during a fragile time in the country’s history, as Japan's occupation of Thailand had just ended in the aftermath of World War II.

CNN reports he was instrumental in maintaining peace in tumultuous times, including during violent clashes between Thai students and military rulers in 1973, and between pro-democracy advocates and the army in 1992.

Officially, the king had little political power. He oversaw 20 different prime ministers during his reign. His lack of direct political pull did not mean much, however, as he held much unoffiical sway with the Thai government.

Most will remember Bhumibol as the facilitator and stabilizer of a strong economy, as well as calming peacemaker who stood by traditional values of his country.

If you’re interested in obtaining one of the 9,999,999 postcards that are being produced, get more info here.

Celebrating the Stamp Princess of Thailand