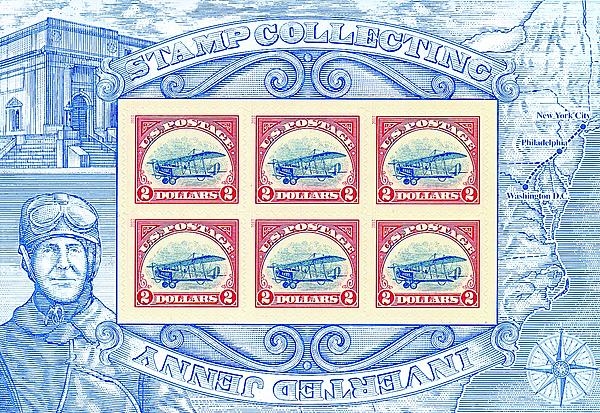 Thirty individuals who found the scarce $2 Jenny Invert upright variety among their stamp purchases have reported their finds with the United States Postal Service.

The United States Postal Service said in early November that 30 panes of the scarce upright variety of the $2 Jenny Invert pane (Scott 4806d) have been registered with the USPS since the stamps were first issued Sept. 22, 2013.

As a promotional scheme, the Postal Service intentionally printed 100 panes of six of the upright variety of the $2 Jenny Invert issue (Scott 4806). Like the millions of normal stamps that show the plane flying upside down, these rare variety panes — which show the plane flying upright — are hidden within sealed blind packaging, which, from the outside, cannot be distinguished from the regular issue. The variety panes were then mixed in with the normal stamps.

The 100 upright variety panes were packaged with a card printed with a phone number the finder could call to receive a certificate signed by the U.S. postmaster general to register the purchase and discovery.

In late October, the Postal Service told Linn’s Stamp News that its inventory of the $2 Jenny Invert stamps has been depleted at its Stamp Fulfillment Services warehousing facility in Kansas City, Mo. The stamps are still available from many post offices around the country.

Postal Service spokesman Mark Saunders noted that more than half a million panes are available from those retail locations. The full print run of this issue was more than 2.2 million panes.

Taken together, these figures indicate that roughly 75 percent of the print run has been sold, but only 30 percent of 100 panes of the upright variety have been reported to the Postal Service.

This discrepancy points out the challenge of tracking sales of the rare variety. Finders are not required to phone the Postal Service to claim the rare prize: they already have it in hand.

Saunders touched on this fact in his response to Linn’s.

“Keep in mind, we only know what has been reported/registered,” he noted.

The new figure indicates that six panes of the upright variety have been reported to the Postal Service over the past 12 months.

Linn’s reported in November 2015 that Robert Sezak, a used-book dealer in Waterville, Maine, purchased a pane of the upright variety at a local post office. He reported his find to the Postal Service, and received certificate number 24 of 100, signed by Postmaster General Megan Brennan.

His pane sold in a February auction for $59,205. The 2017 Scott Specialized Catalogue of United States Stamps and Covers values the pane of six of the upright variety at $75,000, with that figure in italics, which indicates that determining an accurate value for the infrequently traded item can be difficult.

No additional details were provided about the finds. It might be that some or all of the finds listed without a designated post office were obtained by mail order when the panes were still offered through Stamp Fulfillment Services and the Postal Service’s online retail site.