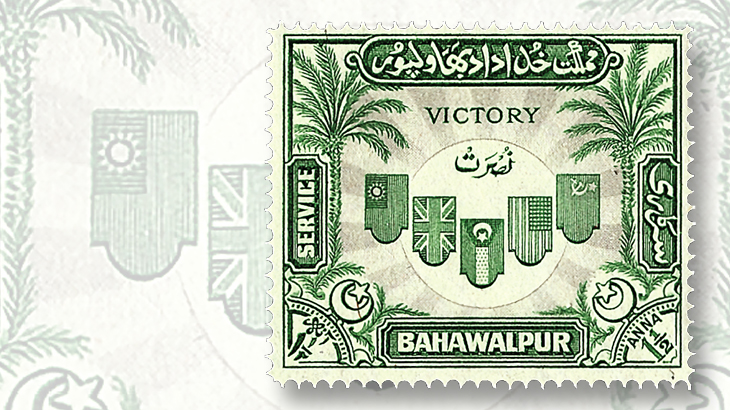 The Pakistan-Bahawalpur 1946 Flags of Allied Nations Official stamp (Scott O16) is a good buy in mint never-hinged condition at the 2017 Scott catalog value of $5.50.

Independence in 1947 brought the partition of British India into Pakistan and India. Bahawalpur joined Pakistan Oct. 5, 1947, but retained a degree of autonomy until Oct. 15, 1955, when it became a province of West Pakistan.

Bahawalpur had its own postal system and issued stamps from 1947 to 1949. The market for stamps of Bahawalpur and those of Pakistan issued up to about 1955 has become quite active for better items in mint never-hinged condition. Most issues are a very good buy if you find them offered at 2017 Scott Standard Postage Stamp Catalogue value.

Look for the Bahawalpur Flags of Allied Nations Official stamp (Scott O16) issued May 1, 1946, to commemorate the Allied victory in World War II. The Scott Standard catalog values the stamp at $5.50 in mint never-hinged condition. It is a great buy at that price.

A good way to enter the very active colonial stamp set market: Tip of The Week