How many Jack-o’-Lantern stamps were affected by die-cut shifts? 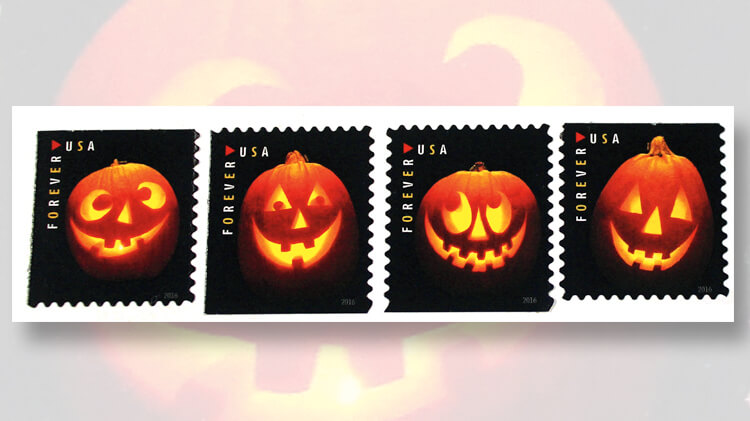 A small percentage of the Jack-o’-Lantern stamps issued Sept. 29 have displayed size variations caused by die cuts that are out of register. The variations appear not to be causing major varieties.

Out-of-register die cuts described by a United States Postal Service contract printer as affecting the 2016 Jack-o’-Lantern forever stamps (Scott 5137-5140) do not appear to be creating any major stamp varieties.

Collectors have noticed that a small percentage of the Halloween-theme stamps, estimated by printer and processor Banknote Corporation of America at about 5 percent, have a shifted die cut that results in stamps with two different heights coming from the same booklet.

The illustration shown above, provided to Linn’s by reader Craig Covert, demonstrates the variations in size for four Jack-o’-Lantern forever stamps that were removed from the same double-sided pane of 20.

These four rectangular stamps were photographed at a slight angle.

Banknote Corp. released a statement distributed by the U.S. Postal Service describing a “Jack-o’-Lanterns Stamp Defect.” The statement noted that approximately 5 percent of the 50 million stamps for this issue could be affected “by the out of register die cut.”

New error discovered on 2016 Quilled Paper Heart stamp: The first major error reported on a 2016 U.S. stamp issue was discovered in mid-October by a collector at a small Pennsylvania post office.

Die cuts that are out of register creating minor variations in stamp size have occurred before on other issues, but this processing variety has been acknowledged by both Banknote Corp. and the Postal Service.

Banknote attributed the problem to a manufacturing defect in the die cuts, adding that the stamps affected should have been segregated before the stamps were distributed. The printing firm apologized for “this oversight in our quality control process.”

The Postal Service distributed the stamps normally, and does not fulfill requests for the production variation.

Collectors on the lookout for errors, freaks, and oddities might be interested in adding a booklet of these issues to their collections, but the variations reported so far do not appear to have the significance that warrants a minor listing or note in the Scott Specialized Catalogue of United States Stamps and Covers.

The entire designs of the individual stamps, including the year date, are within the borders of the die cuts on the stamps pictured here.

If there are variations of the die cuts that are misaligned even further, they could affect elements of the stamp design, such as trimming off the year date from the lower right corner. There have been no reports to Linn’s Stamp News of more significant variations.