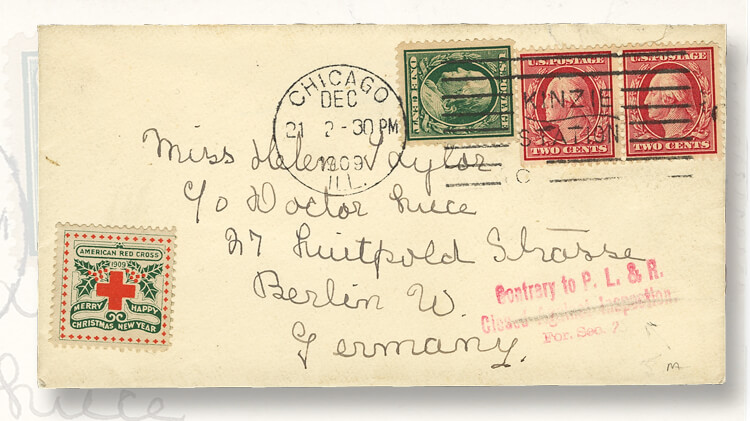 In 1909, the New York post office, which processed and rejected this cover, apparently did not have a handstamp stating that seals could not be placed on the address side of mail to Germany, so a postal clerk adapted another handstamp. 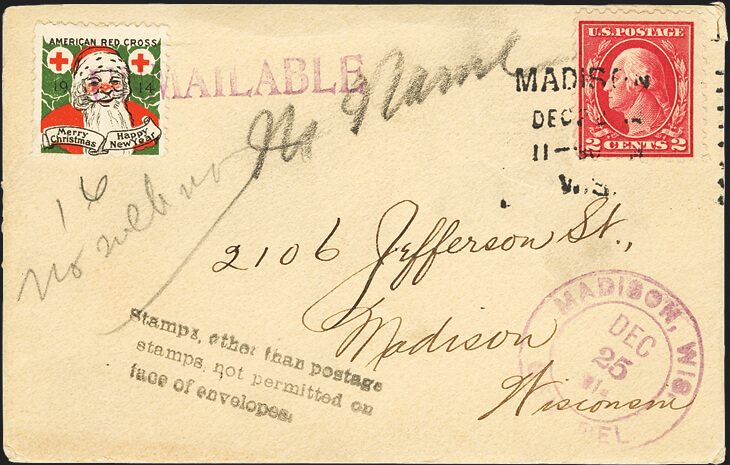 This 1914 cover was rejected because of the Christmas seal on the front. However, the rejection was incorrect because the Post Office Department suspended the rule prohibiting seals on the address side for the month of December. 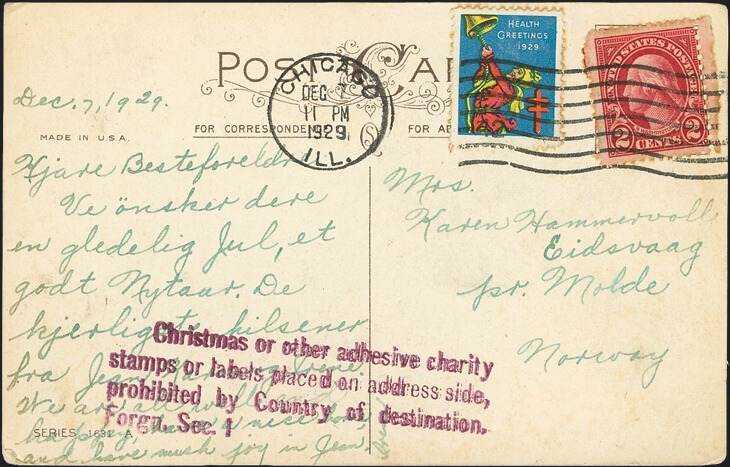 By the 1920s, appropriate handstamps had been created to reject mail sent to foreign countries with a Christmas seal on the address side, as shown on this 1929 postcard addressed to Norway.
Previous
Next

In the early days of Christmas seals, 1907 into the 1920s, problems were caused when people tried to use them to pay United States postage.

After that, the incidence of such attempts seems to have decreased.

The Post Office Department met this problem head on with a 1911 rule that said: “No adhesive stamps or imitations of stamps, of any form or design whatever, other than lawful postage stamps, shall be affixed to the address side of domestic mail matter, but such adhesive stamps … may be affixed to the reverse side of domestic mail matter.” (Postmaster General Order 5620, July 1, 1911).

However, later that same year, on Dec. 9, Postmaster General Order 5962 was promulgated — probably because of experience with Christmas seals — suspending Order 5620 until Jan, 1, 1912.

My theory is that this situation was caused by the fact that into the 1930s, most Christmas greetings were sent by postcard, and it didn’t seem right to put the seal on the picture front.

Because the concept of Christmas seals as a fundraiser depended upon their popularity for use in dressing up a Christmas greeting sent though the mail, the POD had no real alternative but to allow their use on the address side of mail during the Christmas season.

But there is always someone in a large organization, such as the POD or today’s Postal Service, who does not get “the word,” and the 1914 domestic cover shown nearby is one result.

The cover was mailed Dec. 22, 1914, to an addressee in Madison, Wis. The suspended rule was enforced by the Madison post office, which added two related handstamps. One handstamp reads “Unmailable,” and the other, “Stamps, other than postage stamps, not permitted on face of envelopes.”

Other countries were also concerned about the use of Christmas (and other) seals. According to Randy Stehle, writing in a March 2001 La Posta article: “By the time the July 1912 Postal Guide was published, 31 countries had prohibitions dealing with charity seals.

“Most of these countries were small nations in Africa, the Caribbean, Asia, North America and South America. The only European countries were Germany, Great Britain and Gibraltar … It was not until sometime between 1921 and 1922 that all foreign countries banned charity seals on mail matter.”

That was accomplished by an addition to Universal Postal Union rules. Two examples are shown nearby.

The first is a 1909 envelope addressed to Germany. The New York Post Office Foreign Section, knowing that Germany specifically prohibited seals on the face of incoming foreign mail, used a handstamp to reject the cover.

The second cover, bearing a 1929 Christmas seal, is addressed to Norway. By then, there were handstamps covering the specific problem. This one on this postcard reads, “Christmas or other adhesive charity stamps or labels place on address side, prohibited by Country of destination. Forgn. Sec. 1”.

Rejected seal covers being sent to foreign addresses are very scarce. I’ve seen fewer than half a dozen in 50 years of collecting seals. More often than not, the rule was simply ignored.