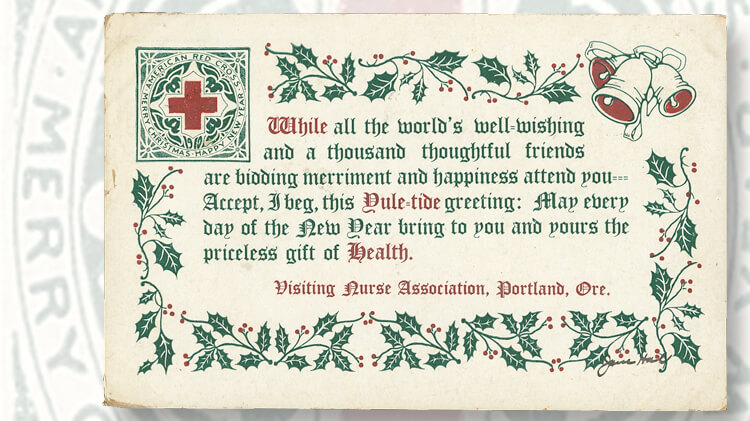 The front of a picture postcard sent Dec. 19, 1910, by the Visiting Nurse Association of Portland, Ore., as a promotional item to help generate interest in purchasing Christmas seals. The card pictures a representation of the 1910 Christmas seal. The actu 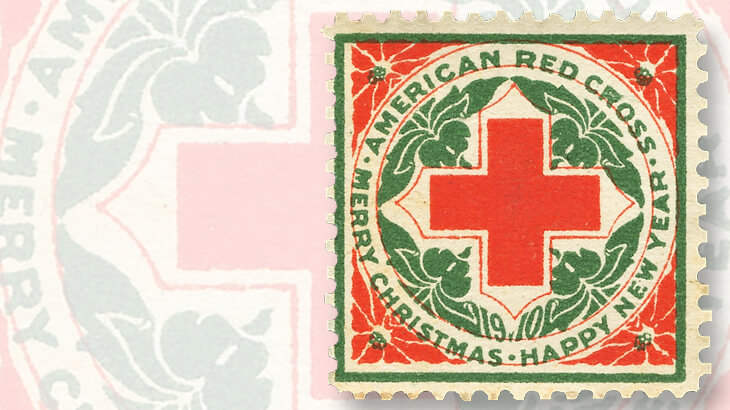 The 1910 national Christmas seal. The representation on the postcard shown nearby is not accurate.
Previous
Next

In the early years of the last century, most Christmas greetings were sent as postcards. Christmas cards in envelopes began to appear in significant numbers in the late 1920s.

Postcards with greetings from organizations are unusual, so I was pleased to snap up the Dec. 19, 1910, example shown nearby. It was canceled in Portland, Ore., and sent to Chicago, Ill.

The front of the card reads, “While all the world’s well-wishing and a thousand thoughtful friends are bidding merriment and happiness attend you — Accept, I beg, this Yule-tide greeting:

“May every day of the New Year bring to you and yours the priceless gift of Health.”

The card includes a representation of the 1910 national Christmas seal, not an exact replica as can be seen by comparing it to an actual 1910 seal.

One aspect of Christmas seal collecting is the wide variety of promotional material created by local and national organizations to help sell the seal, and thus raise money for medical research and treatment. This is a nice example.