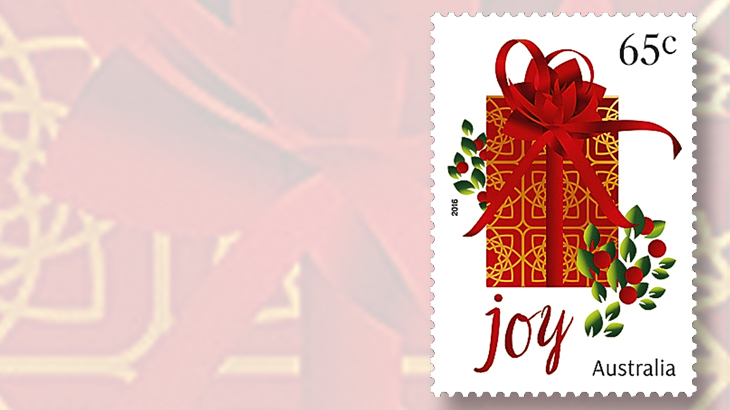 A wrapped Christmas present represents joy on this stamp from Australia. 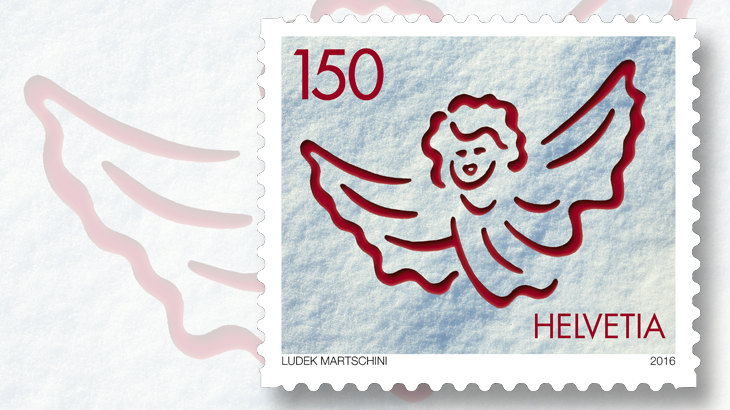 An angel is outlined in red in the snow on a stamp from Switzerland. 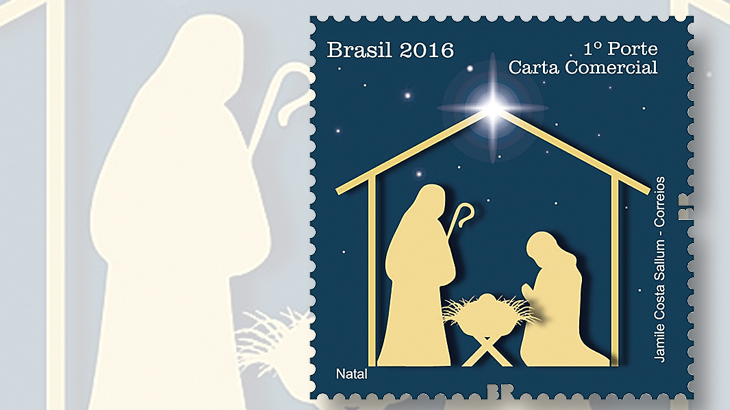 A silhouette of the Nativity in gold is pictured on this nondenominated Christmas stamp from Brazil. 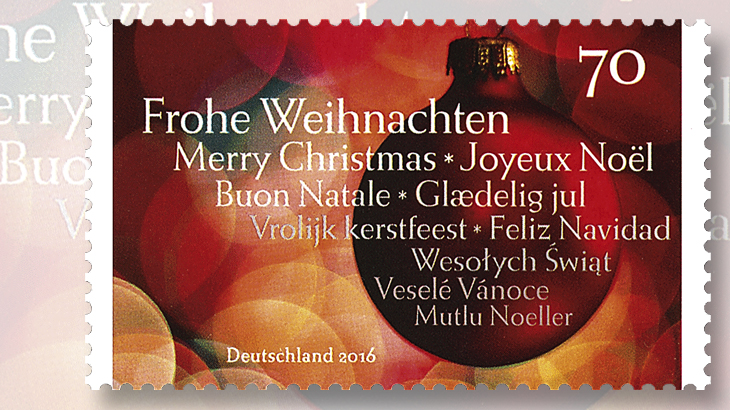 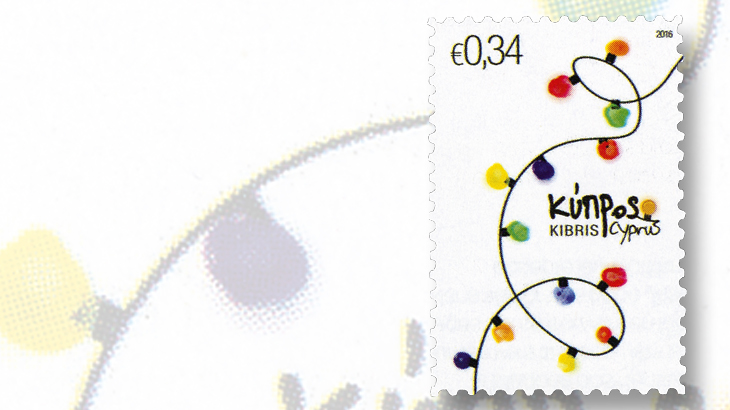 A Christmas stamp issued Nov. 17 by Cyprus depicts a looped strand of lights on a white background. 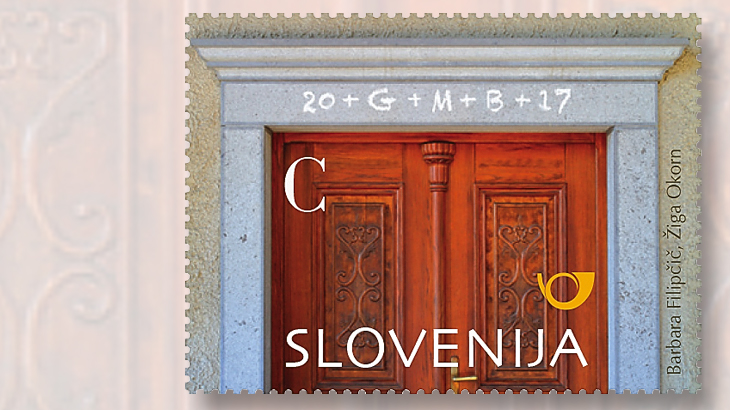 An Epiphany blessing is written in chalk above the door on this Christmas stamp from Slovenia. 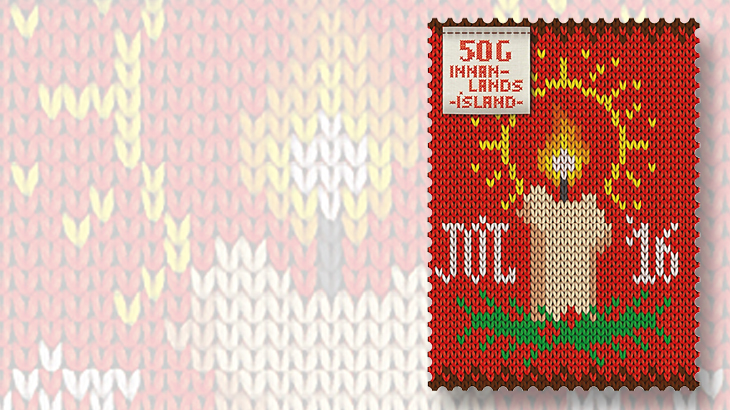 A knitted version of a candle is pictured on one of the three 2016 Christmas stamps from Iceland.
Previous
Next

For this year’s Christmas stamps, several postal administrations appear to have taken a minimalist approach in design, perhaps following the “less is more” adage or simply trying to remove some Christmas clutter.

Cyprus also issued a 0.64 Christmas stamp picturing Adoration of the Magi, an icon originally from the Church of Panayia Faneromenis in Nicosia, now in the  Byzantine Museum of the Archbishop Makarios III Foundation.

The three Christmas stamps from Cyprus were designed by Marianna Iacovou and Nicolas Ladommatos.

Freshly fallen snow forms the backdrop for Switzerland’s Christmas stamps designed by Ludek Martschini. A red outline image of an angel is featured on the 1.50-franc stamp.

The other designs show similar images of a tree in green (85 centimes), a snowman in blue (1fr), and a sled in tan (2fr).

Both Cyprus and Switzerland issued their Christmas stamps Nov. 17.

Guernsey Post selected symbols representing holiday traditions in the United Kingdom and beyond for its Christmas stamps issued Nov. 8.

The seven designs, which include foil, show a holly and ivy, a tree, a wrapped present, Santa Claus, a reindeer, snowman, and star, all in green and gold on a white background.

Another seven stamps for Alderney, an island that is part of the bailiwick of Guernsey, depict symbols of Christmas in blue and silver.

Australia’s three religious Christmas stamps (65¢, $1.70, and $2.25) illustrate scenes of biblical accounts of the birth of Jesus from the Gospels of Matthew and Luke.

Australia Post described the designs by Stuart McLachlan as having “been executed using the intricate technique of paper-cut,” adding that McLachlan “hand-cut delicate paper shapes before layering and colouring them to create the beautiful images.”

Mary, Joseph and the baby Jesus in the manger are silhouetted in gold on the nondenominated stamp paying the first-class domestic rate. The 2.40-real stamp shows a gold woodcut style illustration of the archangel Gabriel by Biagio Mazzeo.

The design of Germany’s 0.70 stamp is based on a photograph of a single red ornament in the foreground and an abstract background of Christmas lights. The photo, which is copyrighted Getty Images, is by Joey Waitschat.

A knitted version of a round Christmas ornament is illustrated on Iceland’s nondenominated stamp for use on mail to other European countries. A knitted star and a Christmas candle are shown on the stamps for domestic second- and first-class mail, respectively.

Edible stars and other Christmas symbols appear on stamps from Estonia and Gibraltar.

The €0.65 stamp from Estonia picturing a gingerbread star decorated with white icing is scented to smell like gingerbread as well. This stamp was issued Nov. 18, along with a €1.40 stamp showing symbols of people and animals forming the shape of a Christmas tree.

Gibraltar selected Christmas cookies as the theme for its six stamps issued Nov. 2.

On each design, the cookie or cookies are shown on a background of planks of wood and evergreen branches. Stephen Perera designed the stamps, using photographs from the agency Ingimage.

At first glance, the holiday connection is difficult to find on the nondenominated “C” Christmas stamp from Slovenia.

The stamp depicts a wooden door bare of decorations. Above the door, however, “20+G+M+B+17“ is written in chalk.

The new-issue announcement from Posta Slovenije calls this design the “Epiphany Blessing of Homes.”

Ethnologist Janez Bogataj explains the significance: “One of the rituals or customs surrounding Christmas and New Year celebrations involves the blessing of homes. After the priest blesses a home with a prayer, incense and holy water, he traditionally chalks or otherwise inscribes the letters ‘GMB,’ along with the number of the new year, on the gate or front door. These letters represent the names of the Three Kings, also known as the Magi or the Three Wise Men: Gaser (Caspar), Miha (Melchior) and Boltezr (Balthasar).”

The inscription also is sometimes written above the doors of farm buildings and businesses.

Barbara Filipcic and Ziga Okorn designed this stamp, which was issued Nov. 3 in sheets of 50 and booklets of 12.