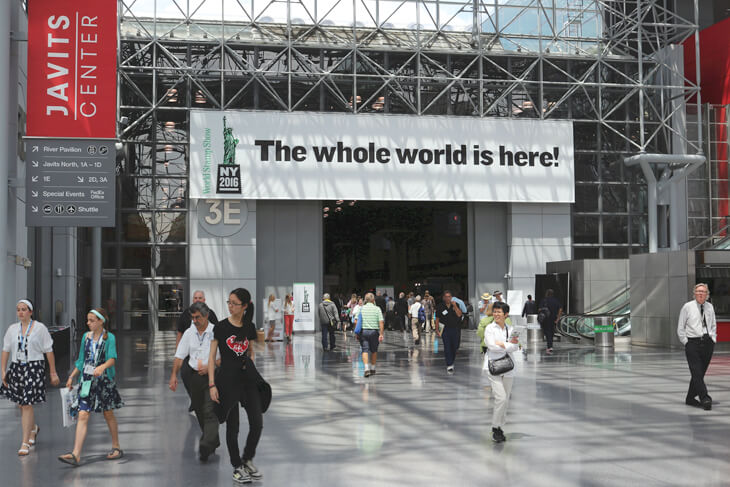 The entrance to World Stamp Show-NY 2016 at the Javits Center in New York City. The May 28-June 6 show drew 23,017 unique visitors, according to the show officials. The visitor count was established by tabulating registration, rather than relying on click

World Stamp Show-NY 2016 reports that 23,017 individuals came to the international stamp show and exhibition held this year in New York City from May 28 to June 4.

Officials at this year’s show took a new approach to counting attendees, one that they feel is far more accurate than any stamp show attendance reckoning previously attempted.

At all previous internationals held in the United States, attendance has been measured by “gate clicks,” Saadi said in a statement released in early November.

Gate clicks are tallied by someone stationed at an entrance, using a handheld mechanical device to count anyone entering the venue.

“This would include re-entering the show floor after attending a seminar, an auction, going to get coffee or lunch, visiting the lobby for an event, going for some fresh air, etc.,” Saadi said.

“It was felt the most accurate way for us to account for attendance would be by counting those who actually registered; the unique visitors,” said Saadi. “This was possible for this show with the advent of online registration and today’s technology; almost 50 percent of our registrations were done prior to the show by the showgoer, and another 10 percent by us beforehand (dealers, exhibitors, volunteers, donors, et. al.). Afterwards, using the actual registration numbers, others could extrapolate whatever hypothetical they need from there.”

The last international stamp show and exhibition held in the United States was 10 years ago, in Washington, D.C. Attendance at Washington 2006 was measured by gate clicks, which totaled 226,817 for the eight-day show.

The actual number of unique visitors was certainly much lower, according to Ken Martin, who was bourse and advertising chair for the Washington show.

“Based on my observations as well as data on hotel room utilization and show programs distributed, Washington 2006 probably had no more than 25,000 unique attendees,” Martin told Linn’s in response to an inquiry.

In his report of the registration figures for the New York show, Saadi reasserts that the 2016 show was a hit.

“Regardless of different methods of accounting for attendance, there were more important and relevant methods of determining the success of a U.S. International,” he said. “To wit: the vast majority of the dealers who attended had a fantastic show and were delighted at their sales and traffic. The show attendees, from all accounts, were delighted with the event. The press reports and coverage were fantastic and the hobby was well served by the exhibition.”