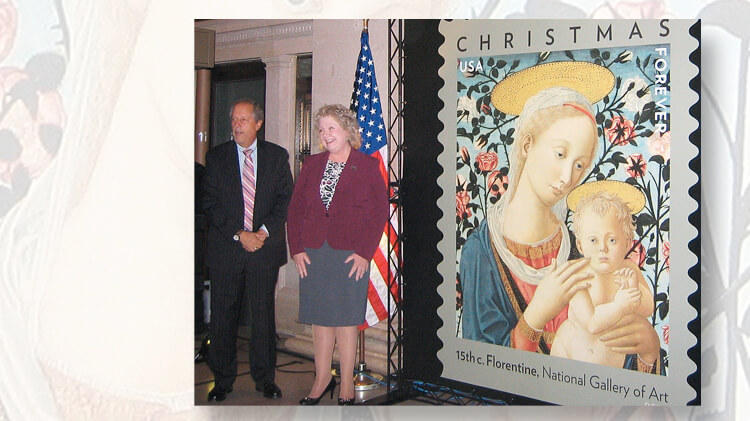 Allen Kane (left), director of the National Postal Museum, and Linda Malone, area vice president of the Capital Metro Area for the United States Postal Service, unveiled the Florentine Madonna and Child stamp at the first-day ceremony held Oct. 18 at the

The United States Postal Service dedicated its 2016 Florentine Madonna and Child Christmas stamp with tributes to Italy and a former postal official who has hosted many of Washington’s first-day ceremonies.

The Oct. 18 release of the forever holiday stamp drew a small audience of about 150 people to the National Postal Museum on Capitol Hill.

Jeffrey C. Williamson, chief human resources officer at the USPS, used the event to laud Allen Kane, the museum’s director for the past 14 years.

Assisting Kane with the unveiling of the stamp was Linda Malone, who serves as area vice president of the Capital Metro Area for the Postal Service.

Kane, a former Postal Service executive, has hosted dozens of first-day events at the museum during his tenure, and the Florentine Madonna and Child is likely his last.

Citing a recent heart attack, Kane has announced that he will retire from the museum in January.

“We want to say thank you and goodbye to a special colleague,” Williamson told the audience.

“During his tenure, the museum has seen a remarkable growth,” the postal executive said, citing an increase in exhibitions and the stamps in its collection.

“It would be impossible to overstate the significant contributions Allen has made to both the agency and this museum,” Williamson said, referring to Kane’s 30 years with the Postal Service.

“Everyone who supports the Postal Service owes Allen Kane a debt of gratitude,” he said to applause.

Kane expressed appreciation for the tribute but added: “I sure don’t want to be on a stamp yet.”

That’s because the USPS requires anyone honored on a U.S. stamp to be deceased, he said.

The ceremony, held in what was once the great hall of Washington’s premier post office, also was filled with praise for the unknown Italian artist who created the Florentine Madonna on the stamp.

National Gallery of Art curator Gretchen Hirschauer told how the painting was believed to have been influenced by two 15th-century Florentine painters.

As for the artist, “we hope one day to discover his name,” she said.

Miles Fisher of the Sons of Italy reminded the audience how strongly Italians have influenced America.

A highlight of the event was the singing of the Eye Street Boys Choir from Washington’s Gonzaga College High School.

“They never disappoint,” said Williamson, who noted that his son is a member of the group.