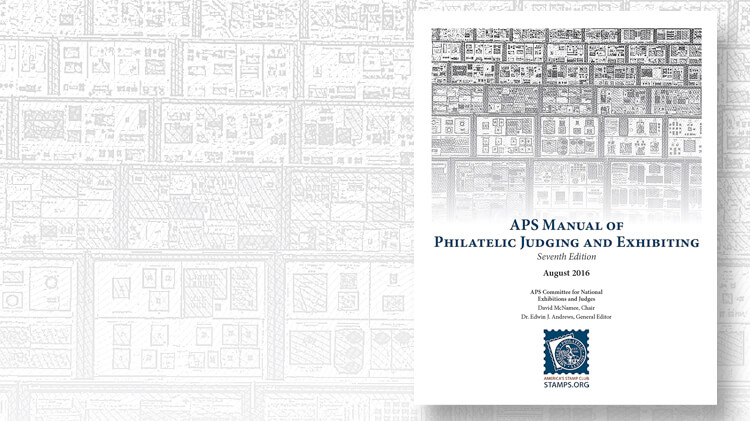 The front page of the revised APS Manual of Philatelic Judging and Exhibiting, Seventh Edition, published by the American Philatelic Society.

A newly revised edition of the American Philatelic Society’s philatelic exhibiting manual has been posted on the society’s website and can be downloaded as a PDF document.

The APS Manual of Philatelic Judging and Exhibiting, Seventh Edition, sports a newly modified title, adding “and Exhibiting” to the original name of the book.

The book was revised by members of the APS Committee on Accreditation of National Exhibitions and Judges (CANEJ), including David McNamee, the former chairman of the committee, and general editor Edwin J. Andrews.

“The editorial committee for the seventh edition purposely sought to involve a large segment of the philatelic community in crafting this edition. Designated groups have provided advice, written sections, and reviewed the draft Manual,” according to the foreword to the seventh edition.

For collectors interested in competitive exhibiting in the United States, the manual provides guidance that explains how such exhibits are evaluated by APS-accredited judges.

“The purpose of this document is to provide both judges and exhibitors with current guidelines on how to judge or create an exhibit,” the foreword explains.

The new manual significantly revises much of the information previously published in the sixth edition.

The most dramatic change, effective Jan. 1, 2017, is the requirement that APS World Series of Philately shows offer eight medal levels, an increase from the five medal levels previously offered.

The previous levels were gold, vermeil, silver, silver-bronze, and bronze.

“These medal levels and point ranges are consistent with other countries’ national level shows,” the newly revised manual explains. “They have stood the test of time, and in every survey of U.S. exhibitors since 2009, large numbers of exhibitors have requested at least the Large Gold so that competitive exhibitors could better gauge their chances for winning top prizes.”

As a result of this change, there is a strong focus in the manual on the use of the philatelic judge’s Uniform Exhibit Evaluation Form.

“This Manual provides the necessary understanding of the UEEF as the foundation upon which to build or judge any exhibit,” the foreword notes.

The seventh edition of the manual and the judging evaluation forms can be read online or downloaded from the APS website. The Uniform Exhibit Evaluation Form can be found here.