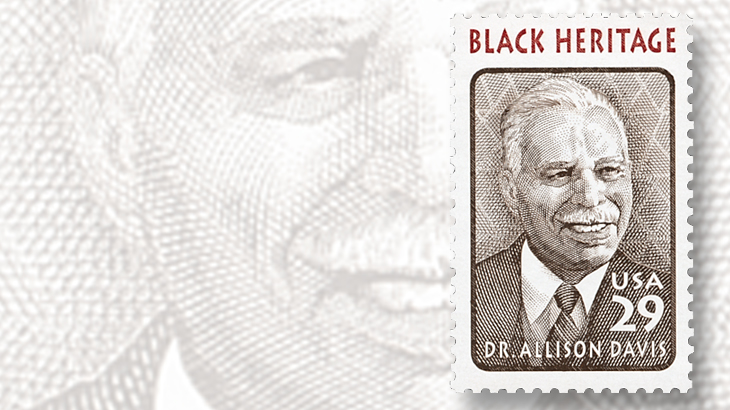 Allison Davis was commemorated on a 29¢ stamp in the Black Heritage series on Feb. 1, 1994.

Allison Davis, a groundbreaking educator, researcher and anthropologist, was born Oct. 14, 1902, in Washington, D.C. In 1994, Davis was commemorated on a 29¢ stamp in the Black Heritage series (Scott 2816) for “his pioneering work in education and other social sciences,” according to the United States Postal Service.

“He challenged the cultural bias of standardized intelligence tests and fought for the understanding of the human potential beyond racial class and caste,” the Postal Service stated in its Stamp News Release 94-007. “His work helped end legalized racial segregation and contributed to contemporary thought on valuing the capabilities of youth from diverse backgrounds.”

He received his doctorate from the University of Chicago in 1942 and became a member of the faculty there that same year. During the 1960s he participated in civil rights commissions under Presidents Johnson and Nixon.

The stamp honoring Davis was issued Feb. 1, 1994, with a first-day ceremony at Williams College. A second-day ceremony was held on the campus of the University of Chicago.